Where Does Wealth Go? 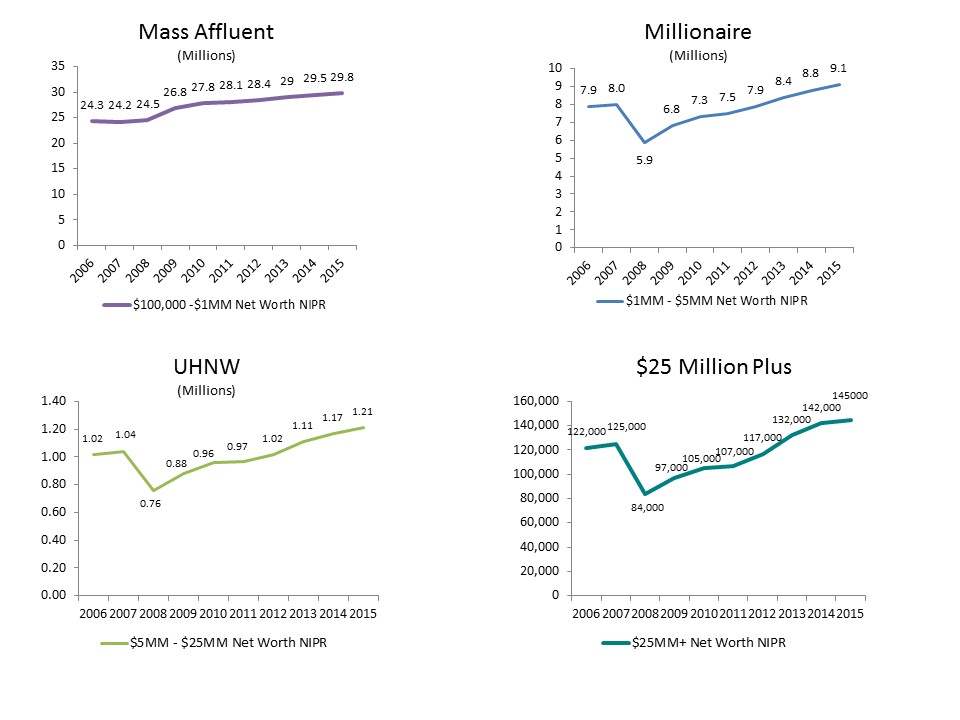 The increase in the number of affluent Americans continues.

Similar growth was recorded in other wealth segments, up to and including investors with a net worth over $25 million.

The percentage of Millionaires also continues to climb. Among the more than 122 million households in America, 8.5 percent have a net worth of at least $1 million. That percentage was as low as 5.9 percent when the nation suffered its more recent recession in 2008.

Our Perspective titled Money in Motion: Asset Transfer and the UHNW determined that more than one-third of affluent investors say estate planning is the component of financial planning they need help with from their financial advisor. That percentage is close to double the percentage of affluent investors who seek assistance related to the Social Security benefits (19 percent).

“Even when investors choose not to include their financial advisor in plans regarding asset transfer and eventual wealth distribution, there are ways advisors can assist investors with their financial futures,’’ said Spectrem president George H.  Walper Jr. “Almost every decision an investor makes and an advisor considers has some ramifications on the investor’s future.”

There are ways advisors can assist investors with their future decisions even when they are not included in estate planning discussions.

An advisor can suggest to investors to make or update their will. A last will and testament allows an investor to state how their money and possessions are distributed upon their passing, and can include details on the guardianship of their minor children.

At the same time, advisors can suggest to investors that they consider establishing a personal trust in order to avoid the difficulty of probate court for survivors.

Life insurance is another investment vehicle advisors can assist investors with. While very wealthy investors often believe they have assets in other vehicles that can provide the same benefits of life insurance, less wealthy investors can be encouraged to consider policies that will benefit offspring when an investor passes.