Where Does Investor Loyalty Lie? 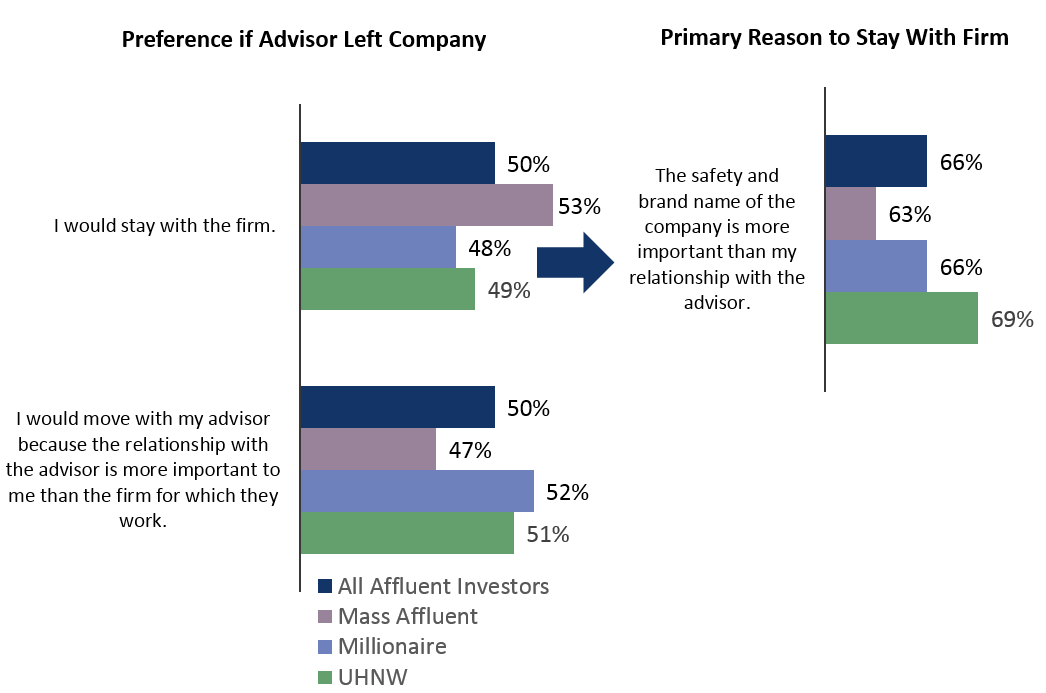 “Loyalty” is a controversial topic among financial providers and advisors because investors sometimes have to choose which they are loyal to, the provider or the advisor.

Our newest study on the subject of Loyalty, Client Loyalty Among Affluent Investors, looks at the dichotomy of investor loyalty between the advisor they work with and the company that advisor works for.

“This is a significant topic because advisors do change firms from time to time, and investors are required to make a choice whether to stay with the firm or move with the advisor,’’ said Spectrem president George H. Walper Jr. “Even when the individual relationship is strong, the choice can be difficult. There are many factors that are weighed in making that decision, and an investor’s sense of satisfaction can be affected.”

Making the issue of loyalty to company or advisor more vexing is that there is an even split among investors as to which way they would go. Exactly 50 percent of investors say they would stay with the firm if their advisor left, while 50 percent said they would move with the investor because that relationship is more important to them than the firm for which they work.

It is possible that the Mass Affluent, a segment that skews younger, might not have the same amount of time invested in the relationship with the advisor, making the choice to stay with the firm more attractive.

Two-thirds of investors who prefer to stay with the firm do so because the safety and brand name of the company is more important than the relationship with the advisor.

Our study examines investor loyalty to all sorts of businesses outside of the investment community, including airlines, hotels, grocery stores and other types of retailers. But the relationship between an investor and an advisor is far more personal than the relationship any consumer has with an individual at any of those other types of businesses.