When Millionaires Spend Their Money 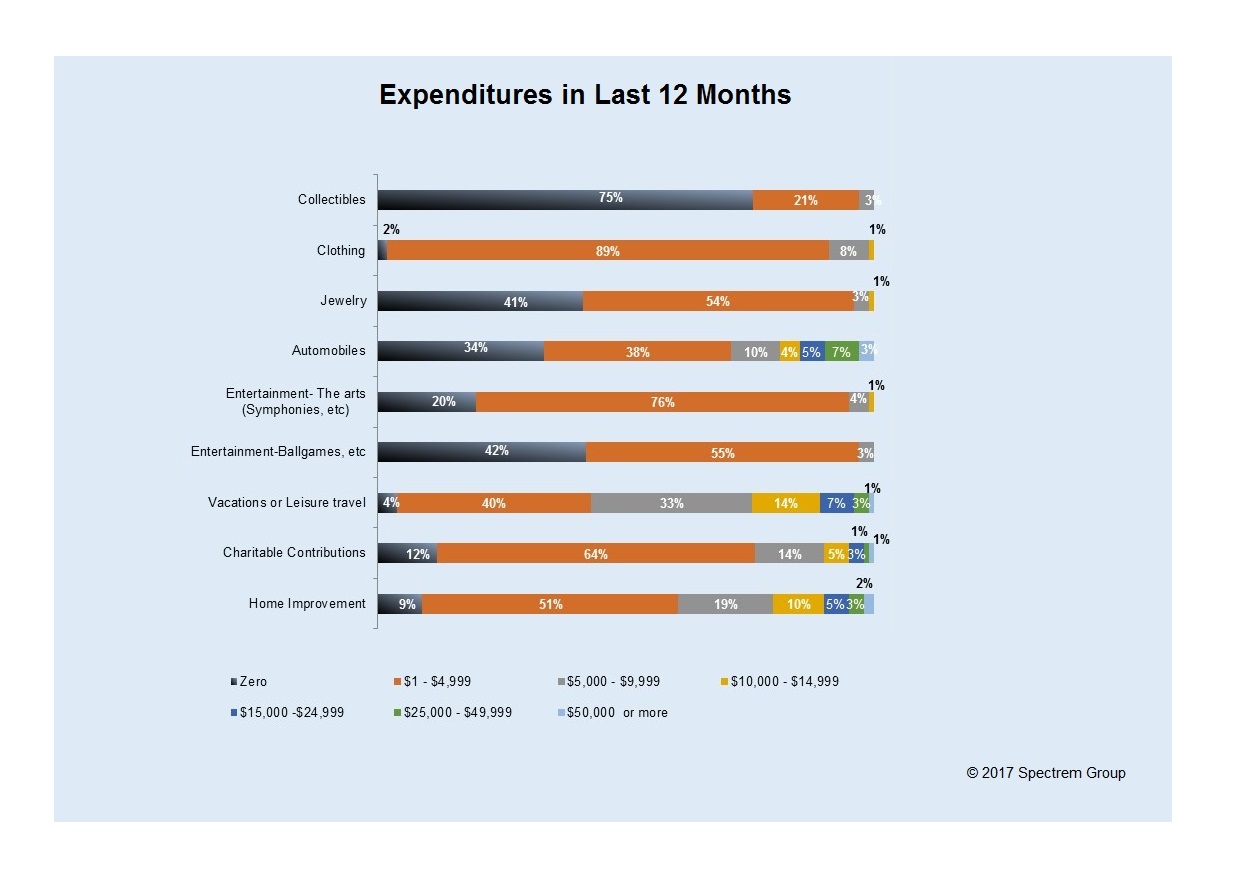 With the possible exceptions of Ebenezer Scrooge and Scrooge McDuck, people acquire wealth in order to spend at least some of it. Advisors work with investors to turn their money into more money, either for current spending, greater investments or to provide funds for retirement.

But investors do not invest all of their money. Some of it they spend.

Spectrem’s annual study on asset allocation among affluent investors looks at how investors invest their funds. It examines their current portfolio, their future investment intentions, their retirement packages, their insurance ownership and security products such as wills and trusts.

But, included in the asset allocation of Millionaire investors is their normal expenditures on clothing, automobiles, entertainment and vacation. Examining those expenditures is revealing when affluent investors are segmented by age and wealth.

There are expenditures in the study that everybody has, and the spending totals are a matter of degree. Everybody buys clothing, most people own cars, and most people do home improvement projects that cost money.

What is revealing is the expenditures in areas that reflect greater choice, such as entertainment purchases, vacation spending, charitable and political contributions, and collectible ownership.

The Spectrem study asked investors to list their expenditures over the 12 months prior to taking the survey, and there is much higher spending on collectibles, vacations and based on age.

The same is true for sporting events, with 21 percent of millennial Millionaires spending at least $5,000 while only 7 percent of Gen Xers did so.

The older the investor, the more likely they are to make charitable contributions. Only 13 percent of millennial Millionaires contributed $5,000 or more in the year prior to taking the survey, while 18 percent of Gen Xers, 23 percent of Baby Boomers and 32 percent of World War II investors did so.

Is that sort of spending just throwing money away? In each case, the investor does get something in return in terms of entertainment, relaxation or self-respect (in the case of charitable contributions). But there are expenditures that do have some value if done properly, such as collectibles.

Certainly, investors invest in order to secure their financial future, or the financial future of their offspring. But they also like to have money to spend on personal pleasure, and advisors can help in that regard as well.

Advisory firms that offer concierge services can provide incentive deals for travel, and can be aware of events which support charitable causes or the arts. While the business of providing financial advice concentrates on investment opportunities, an advisor can improve his relationship with his clients by considering their outside interests and providing information or guidance in how best to spend those funds.