What's Up With The Dow Jones? 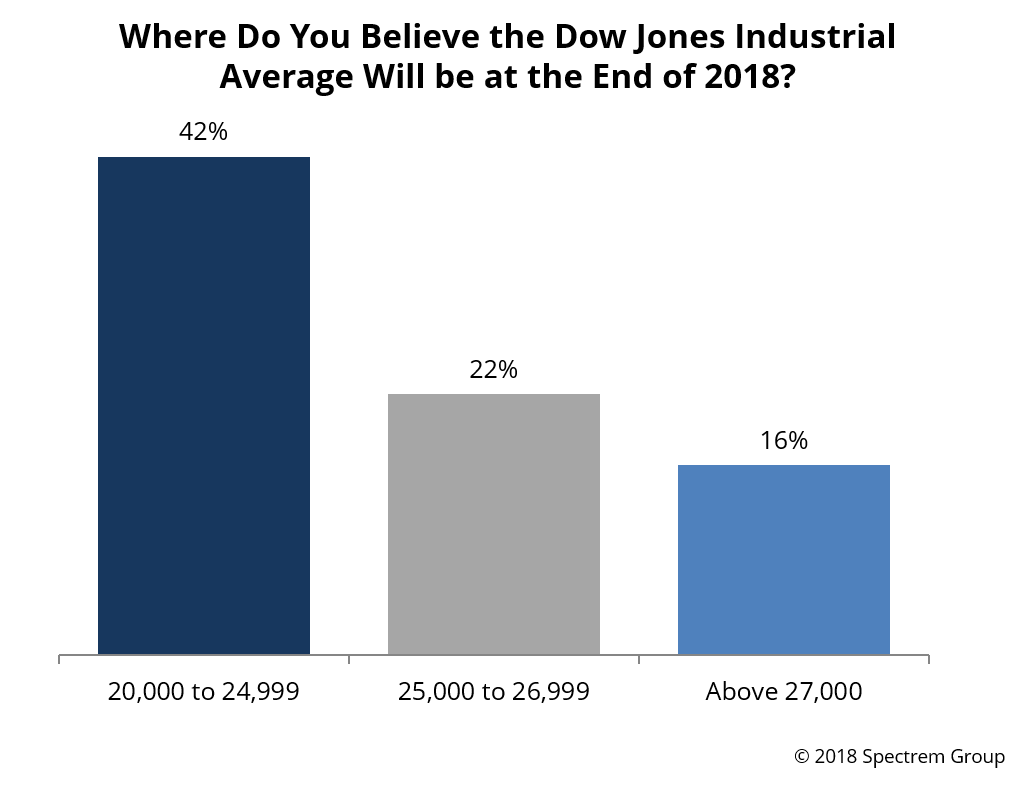 A chart depicting the rise of the Dow Jones Industrial Average over the last 10 years looks like a horizontal view of a mountain climb.

There is a great deal of speculation about whether the relatively high and seemingly unstoppable level of the Dow Jones is a fair and valid depiction of the state of the U.S. economy. But the steady 10-year climb of the DJIA has increased the net worth of millions of invested Americans, creating a huge population of people who consider themselves either affluent or wealthy.

Spectrem quizzed some of those affluent and wealthy Americans to see whether they believed the Dow Jones would sustain its current level of success or would, at some point in the near future, have an adjustment.

In Spectrem’s new study Politics, Taxes and Investors’ Changing Attitudes, investors with a net worth of at least $100,000 (not including the value of their primary residence) were asked where they think the Dow Jones will be at the end of 2018. The answers to this question would be an indication of whether investors see growth continuing as it has for the past 10 years, whether growth would level off, or whether there would be a severe drop in the DJIA through the remainder of the calendar year.

Given choices that range from less than 20,000 to 30,000 and above, the largest percentage of investors (16 percent) believed the Dow Jones would sit between 27,000 and 27,999 at the end of 2018. That indicates a belief that the bull market would continue and would grow through yet another series of record levels for the Dow.

While 16 percent selected a response indicating a further climb, 26 percent suggested the Dow Jones would be even higher than 27,999 at the end of 2018, with 6 percent seeing the Dow reach 30,000 and above. That’s one-quarter of all investors who believe the Dow Jones will be in the 28000 or above range by the time the calendar turns the page to 2019.

Not all investors are that optimistic about the Dow Jones Industrial Average. Thirty-eight percent believe the Dow Jones will end up below 26,000 by Dec. 31, 2018, and 16 percent expect it to be below 25,000 at that time. Twelve percent see the Dow Jones dropping below 24,000 and 8 percent predict it will go below 22,000. Four percent listed “less than 20,000’’ which would indicate an approximate 20 percent loss in the value of the stock market in a very short period of time.

Obviously, no one really knows for sure what is going to happen to the stock market through the remainder of 2018. Otherwise, there would be some very rich people, or there would be a run on the market.

But investors do have an opinion about what drove the stock market to reach the high levels it attained through 2018 and the first part of 2018.

Thirty percent of investors say the stock market really is the product of strong corporate earnings, as investors react to companies which announce positive earnings by investing in the stock of that particular company.

Twenty-two percent of investors say the economic policies of president Donald Trump has been the overriding factor, and 16 percent believe it is the business-friendly environment that exists (which can be seen as a product of president Trump’s policies). Fifteen percent believe the recent change in the corporate tax rate from 35 percent to 21 percent has been the No. 1 factor, and 11 percent see reduced regulations on business in America as the driving factor toward higher stock market numbers.

“Guess the Dow Jones” would be a fun game show, although it would require a bit of lead time, perhaps looking for guesses a month in advance. But investors do not want to guess about the Dow Jones, they want to know.

Advisors have numerous monitors and registers to examine daily to get an indication of what the stock market and the American economy is going to do in the near and more distant future. If you have a client who has an unusual focus on the Dow Jones and other markers, perhaps an educational session would be in order to help them understand that some indices are predictors of the American economy and others are reflectors. People who do nothing but watch the Dow Jones numbers all day long could suffer whiplash.