What To Tell Your Regional Office 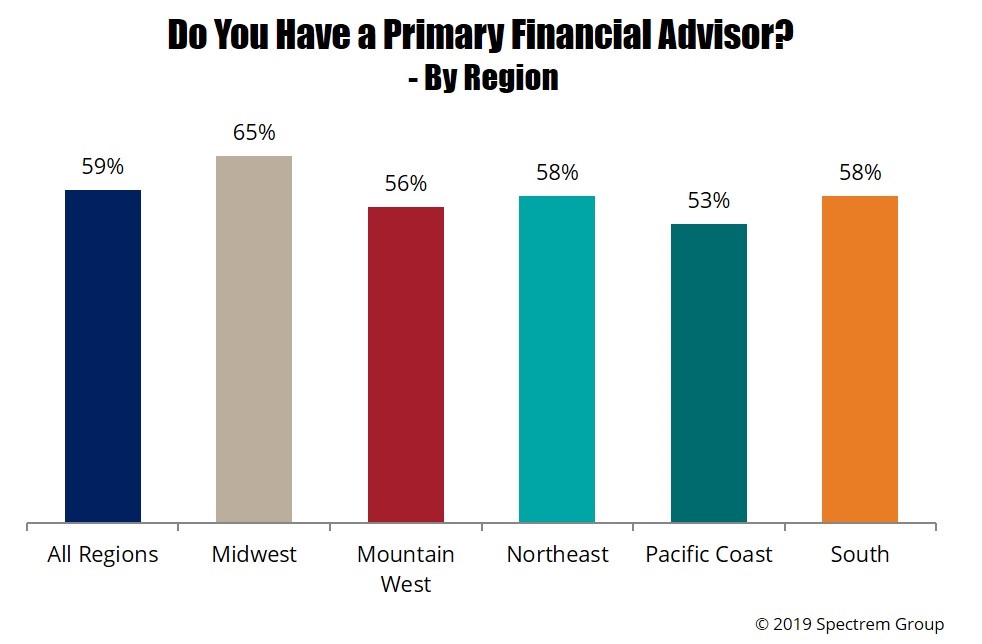 The reasons can be discussed for a long time, but there are differences in how investors invest based on where they were raised and where they currently live.

Regional differences provoked by industry influences, cultural backgrounds, weather and politics can cause an investor from the Northeast to be notably different from an investor in the West. The average investor living in the South is going to be different from the average investor living in the Midwest. And investors who live and work in the Mountain West are an entirely unique breed of investor.

Spectrem’s Perspective on the differences in investors based on the part of the country in which they live does show that there are topics about which investors agree across the map. But there are areas where influences impact investment decisions, and often they are easy to define and understand.

Here is one example from each of the five regions studied in Regional Influences on Investor Decisions:

MIDWEST (Illinois, Indiana, Iowa, Kansas, Michigan, Minnesota, North Dakota, Ohio, South Dakota, and Wisconsin): In most comparisons, investors from the Midwest have fewer assets invested in investment products like stocks, mutual funds, bonds, equities and alternatives. They also have fewer liabilities. They are also most likely to have a primary financial advisor. There is probably a relationship between all three of those characteristics.

MOUNTAIN WEST (Arizona, Colorado, Idaho, Montana, Nevada, New Mexico, Oklahoma, Texas, Utah, Wyoming): Although the region has some important and large urban areas in Texas, Arizona and Colorado, this is still a region that embraces the outdoors. Investors in the Mountain West are more likely to have real estate holdings and are also more likely to have the most assets under management. They are, however, the least likely to have a primary financial advisor.

NORTHEAST (Connecticut, Maine, Massachusetts, New Hampshire, New Jersey, New York, Pennsylvania, Rhode Island, Vermont): This region still has much of its wealth based on old family money (the oldest wealth in the nation) and investments follow family trends. But investors in the Northeast are among the wealthiest in the nation and their portfolios reflect that level of wealth.

PACIFIC (Alaska, California, Hawaii, Oregon, Washington): Always known as the population of outliers in the United States, the wealth in the Pacific region is the youngest. The population of entrepreneurs, who have now collected in the Pacific Northwest, make the region unusually wealthy. But Pacific Coast investors are much less likely to use a financial advisor, and likely to have huge balances in their real estate holdings.

SOUTH (Alabama, Arkansas, Florida, Georgia, Kentucky, Louisiana, Maryland, North Carolina, Tennessee, South Carolina, Virginia, Washington, D.C., West Virginia): By far the least wealthy region of the country, it is still transitioning from its initial economic base as an agricultural center. The wealth of the region is concentrated in a small number of locations (Atlanta, Miami, Orlando, D.C.) Many of the investors in the South still have much of their assets, and their investable decisions, centered on agricultural influences.