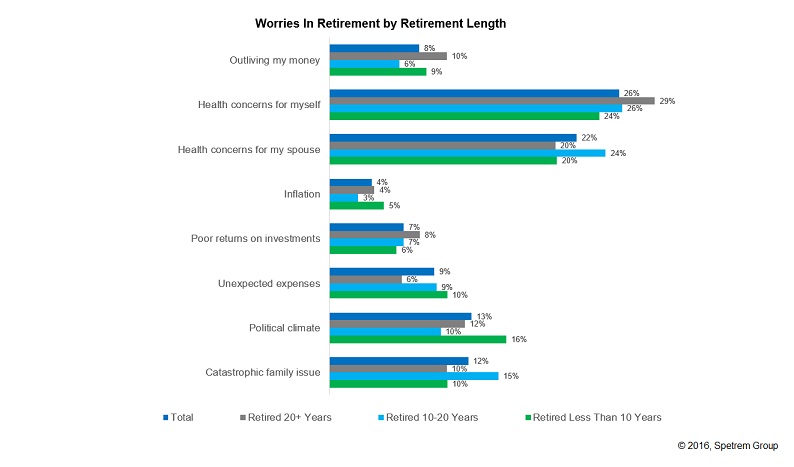 Many affluent investors point to retirement as an ultimate goal, a time when they can allow the worries of life to slip away, and can live life the way it is supposed to be lived.

Unfortunately, even for affluent investors, retirement is not one continuous party. Upon leaving the workforce, new concerns do crop up, and there are some moments of struggle, even for those retirees who are financially stable.

Spectrem’s new study about the financial matters related to retirement – Financial Wellness in Retirement - includes qualitative interviews with investors about their lives in a post-work in retirement. While most retirees claim to be almost giddy about how great retirement is, others expressed dismay over some of the details that come along in retirement.

Some of the issues discussed do not have a financial element to them. But those that do can be addressed before an investor retires, or in the early stages of retirement before problems from advantaged aging can rear their ugly heads.

However, the quantitative portion of the report includes 9 percent of investors who have worries or concerns they did not have prior to retirement, and 11 percent who state that they feel money pressures the longer they live in retirement.

The overwhelming drag on retirees relates to health, either because something has happened that makes their health an immediate concern or because they simply know there will be day when they have to make changes in their lives based on health.

“I worry about health care costs,’’ one retiree said. “Since I retired relatively early, there is a long timeframe to deal with those. That is one that thing that concerns me the most.”

Advisors can actually help with this concern. They can underline the costs related to health care, and perhaps get to know more about an investor’s health history or family health issues to get a bead on what it is going to cost to care for those problems down the line.

“I worry about my health, because I am a caregiver to my mom and I figure if something happened to my husband or myself, we have no long-term plans for assisted living,’’ another investor said.

Again, advisors can assist here. Whether it is to investigate long-term care insurance plans, or to consider other investment vehicles that can be accessed when needed, advisors can make suggestions.

Oddly, many of the retirees surveyed in the quantitative study and many of those interviewed in qualitative research said they had not given any thought to their living arrangements down the line. With the influx of Baby Boomers into the retirement segment of the population, retirement communities have expanded their services. There are now continuing care communities that allow a retiree to move from one level of care to another in the same facility.

Eleven percent of retirees say one of their biggest challenges in retirement is the thought of having to leave their current home.

“It’s a hard decision to make because you never want to not be in your own home,’’ a retiree said. “That is sad.”

“We probably should think about it, but we haven’t,’’ another investor said.

There are, of course, the financial worries, and many of them appear out of nowhere in retirement. Although some have to do with a sudden health crisis or other type of catastrophe, some can creep up on an investor.

“I wasn’t expecting to live this long,’’ one investor said. “I worry that my money won’t last. When I first (retired), I was in very good shape. But the market crash hit me hard, and I am feeling it now.”

“This has been more of a worry lately, but I worry about how to pass my money we are going to have on to our kids without being taxed heavily,’’ another investor said.

Advisors, be aware that your happy retired client can have new and sudden concerns.

Advisors can make themselves knowledgeable about the housing options that exist in their area for retirees so that conversation can be held and investors can feel comfortable with the prospect of moving into a place that caters to retirees in need of some form of assistance.

There are family considerations as well. Advisors can discuss with investors whether they believe their family will provide them with the emotional and physical support they need when the time comes. Answers to those questions can go a long way toward preparing an investor for that next step.