What Factor is Most Affecting Affluent Investors' Investment Plans? 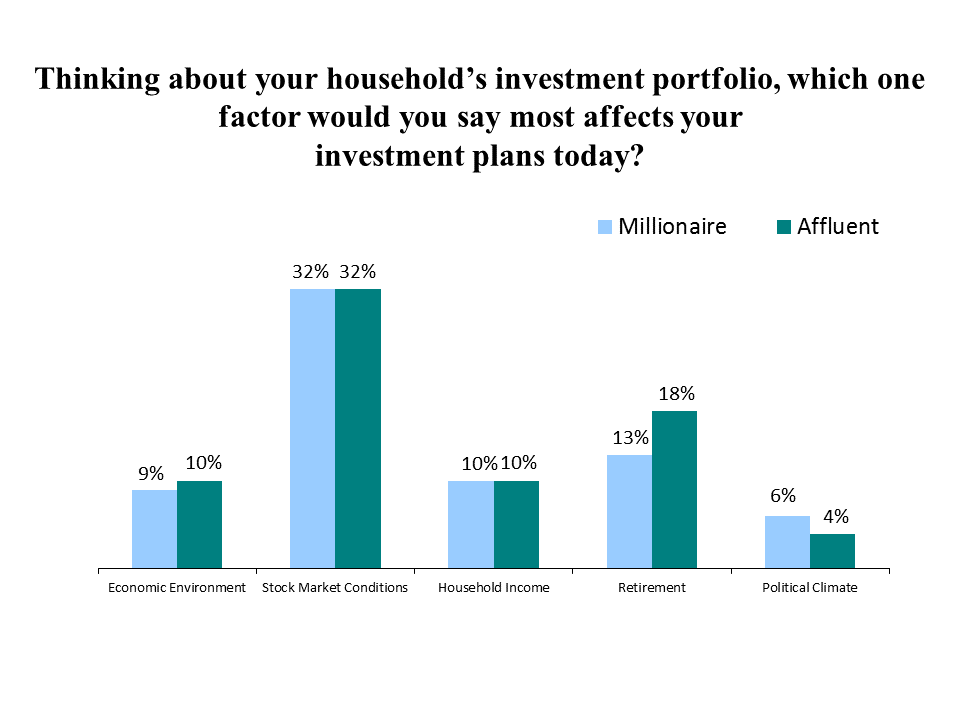 Our new research indicates that Affluent investors are very good at tuning out distractions and focusing on the economic factors they perceive to be most affecting their current investment plans. Only 4 percent of Affluent respondents said they consider the Political Climate to be the most important factor affecting their investment plans. Tellingly, this is up 2 percent from three months ago when this question was last asked, an indication that the increasingly divisive presidential race is hard to ignore completely (In comparison, 14 percent of Affluent investors said in March that they consider the Political Climate to be the most serious threat to achieving their household’s current financial goals, up from 10 percent in December).

A gender analysis of our research finds that Affluent men and women are equally focused on Stock Market Conditions (32 percent), while men were more likely to state that the Economic Environment is the primary factor affecting their current investment plans (11 percent vs. 7 percent of women).

Analyzed by political affiliation, Affluent respondents who identify as Republican are more likely than their Democrat and Independent counterparts to be focused on Stock Market

Conditions in regards to their investment plans (37 percent vs. 31 percent and 27 percent). Those who identify as Independent are more focused on the Economic Environment than those affiliated with the major parties (16 percent vs. 9 percent of Republicans and 4 percent of Democrats). All three are more focused on Retirement and Household Income than they are on the Political Climate.