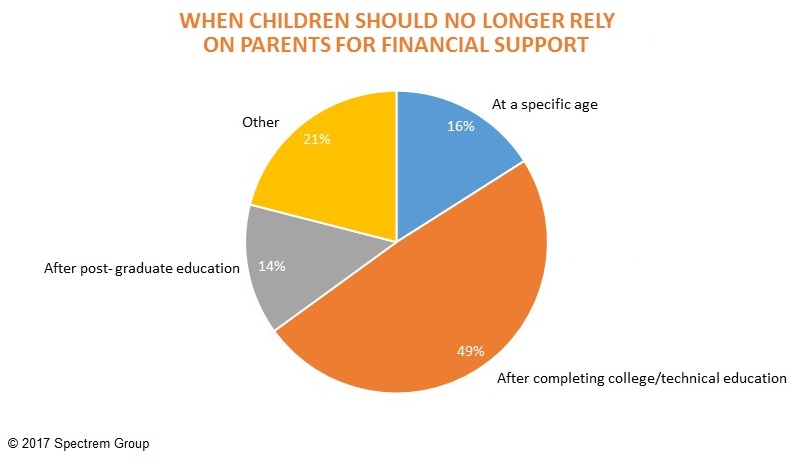 The mothering instinct exists for wealthy women just as it does for women in lower wealthy strata. And just like all other women, women with significant wealth have certain lessons they want their children to learn.

Spectrem’s study on affluent women, Successfully Growing Your Business With Wealthy Women, details how women with a net worth over $1 million feel about their parenting duties, while also examining how having children may have affected the work-life balance of the women surveyed.

“The goal of many investors is to have enough money to pass a sizable amount on to their children,’’ said Spectrem president George H. Walper Jr. “For wealthy women, the goal is to not only offer their offspring an inheritance someday but to also make certain those children are prepared to handle finances in adulthood.“

Among the women surveyed for the Spectrem study, 66 percent are mothers, although most of them no longer have any children living at home. However, you never stop being a parent no matter where the child lives, and 48 percent of wealthy women said they have concerns over the financial situation of both their children and their grandchildren. However, that concern was seventh on the list of concerns, lagging behind concerns over family health issues, dealing with the responsibility for aging parents and concerns about what is going to happen to her own fate when she is old enough to need support due to health issues.

Wealthy women also put a stop point on financial support of their children. Forty-nine percent say children should no longer rely on their parents for financial support once they graduate from college or technical school. This opinion assumes those children get a well-paying job upon earning their degree, which may not always be the case in today’s economy.

Fourteen percent are willing to pay for their children’s lives as they go through post-graduate education. Sixteen percent believe financial support should end when the child reaches a specific age, no matter whether they are in the education process.

This information is critical for advisors to gather when talking with wealthy women. The intended financial support for children will weigh heavily on the money available for investments. A woman intent on helping the child financially past college is not going to be in the same position to invest as a woman who no longer supports her child financially.

Advisors must ask wealthy women the same questions they would ask men about the financial support of their children. It would be wrong to assume women are more financially supportive them men, fighting the stereotype that it is the male of the species who kicks the offspring out of the nest early.

The Spectrem study shows, however, that there are segments of women who feel differently than others toward the financial future of their children. Younger women are willing to wait a bit longer to kick the child off the family dole, for instance. Be aware of what kind of plan the wealthy woman has for the financial future of her child.