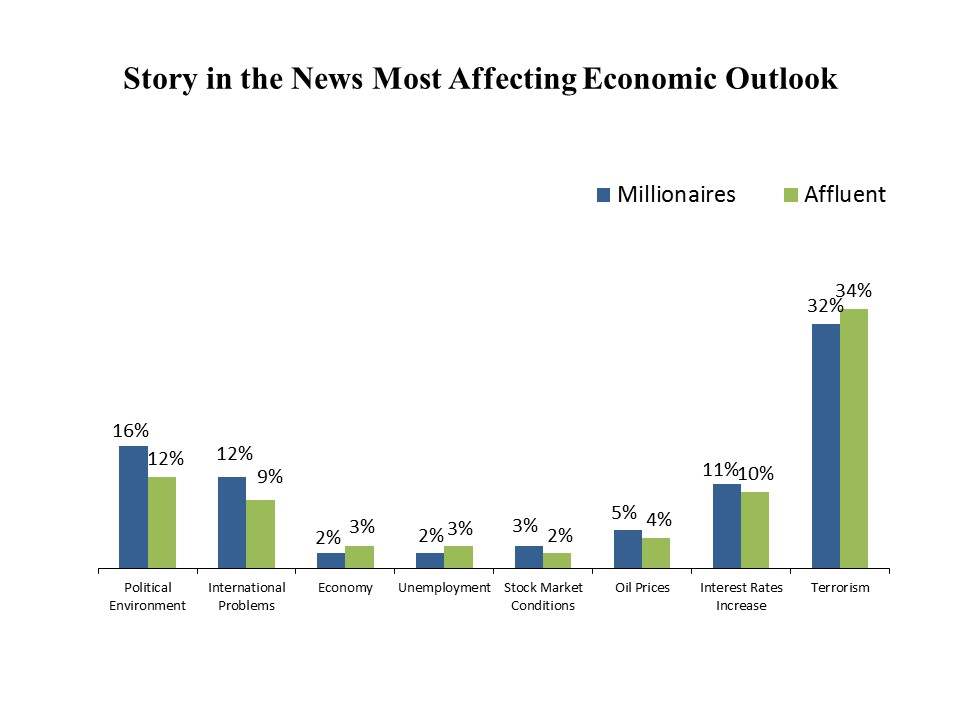 In a month that saw the worst terrorist attack on European soil in a decade, Affluent investors indicate that news stories about terrorism, more than reports about the economy, oil prices or the political environment, are most affecting their economic outlook.

Along with anger and revulsion, terrorist attacks raise uncertainty and uncertainty tends to have a negative impact on the market, at least in the short term. When asked in November by Spectrem Group about the story in the news most affecting their economic outlook, one-third of Affluent respondents responded, “Terrorism,” a significantly greater response than “the Political Environment” (12 percent), “International Problems” (9 percent), “Oil Prices” (4 percent), “The Economy” and “Unemployment” (3 percent each) and “Stock Market Conditions” (2 percent).

Ten percent of Affluent investors indicated that a rise in interest rates was the news story most affecting their economic outlook. In a bid to stimulate the economy following the economic collapse, the Federal Reserve lowered interest rates to near zero in December 2008. Speculation in recent years over if or when the Fed would raise them has triggered market volatility. On September 17, for example, the Dow experience a 250-point swing after the Fed announced it had decided not to raise its key interest rate.

On Wed. Nov. 18, during the fielding period for Spectrem Group’s survey, Fed officials released their official account of the central bank’s October policy-making meeting, which indicated that the economy would be ready for a rise in the benchmark interest rate before the end of the year.

Tellingly, the “Interest Rates Increase” response to Spectrem Group’s tri-monthly survey has increase since February of this year from 3 percent to 10 percent.

To learn more about High Net Worth investors, click here