Two years ago I moved my family from Illinois to Florida primarily because of taxes. The economic and political climate in Illinois was dismal....along with the actual climate (the weather!). We saved enough in personal income tax and real estate taxes to fund my daughter’s college tuition payments. That was a big deal for our finances. Spectrem’s research now shows that we are not alone. While the news includes snippets of the exodus from the big cities to suburbs or the south, research also now proves that climate, taxes and the pandemic restraints are also contributing to the grand relocation. That means that financial providers and advisors need to be able to accommodate customers wherever they may be located.

In research soon to be released from Spectrem Group, The Wealthiest Americans: $25 Million Plus Investors, 53% of investors with more than $25 million of net worth indicated that they have considered changing their legal state of residence in the past 12 months.  That’s pretty significant.  Why are these investors considering a change? 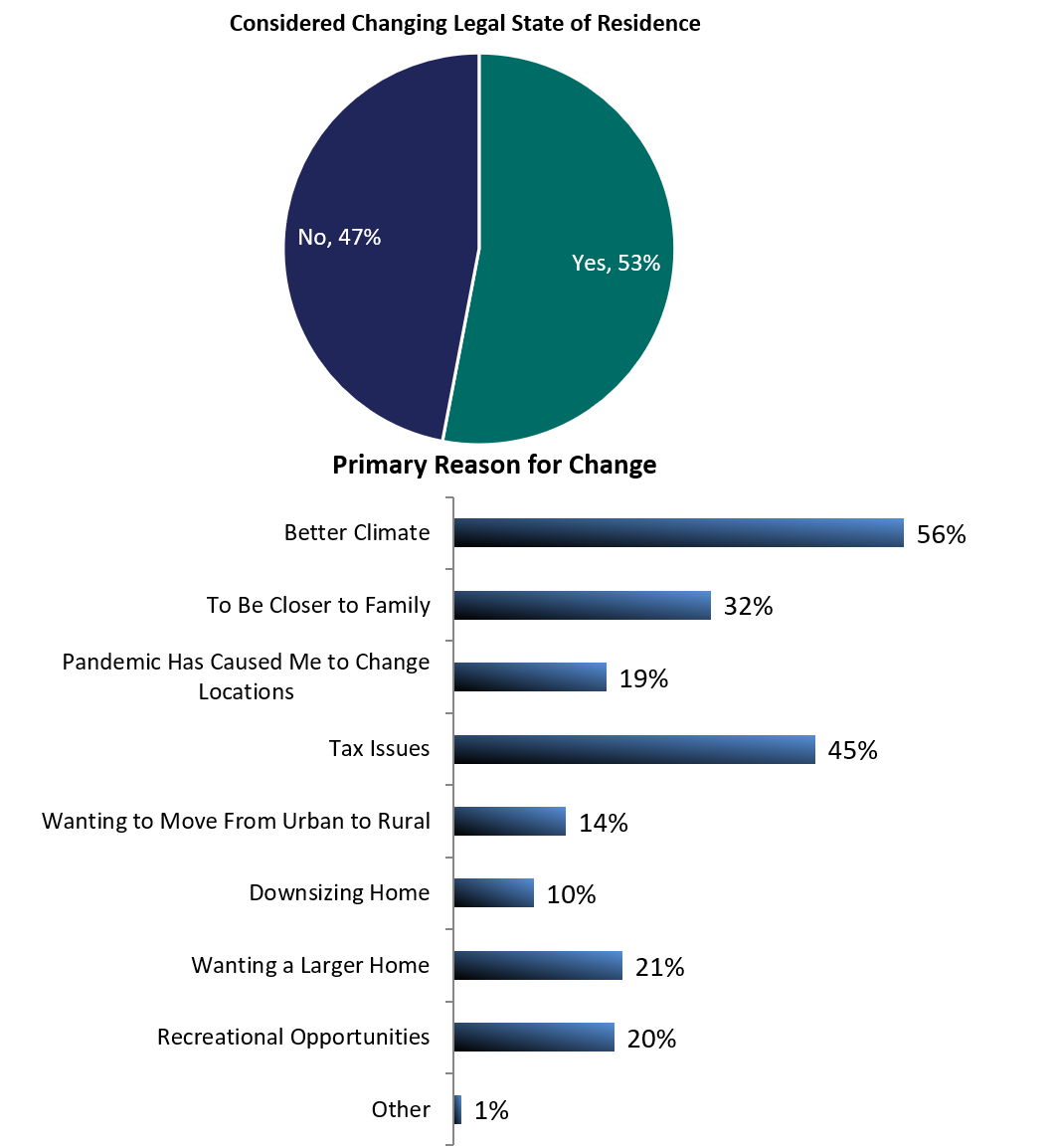 - More than half indicate they are moving due to a better climate.  In research conducted by Spectrem in the past, climate was often a reason to move, but generally the number of investors who had or were considering a move was much lower.  Plus, two-thirds of $25 million plus investors are still working.  Therefore, the "work from home" environment is probably contributing to this decision.

- Forty-five percent of investors indicated they were moving because of the tax environment.  The states that were impacted dramatically by the SALT increases during the last administration (such as NY, IL and others_ have been seeing more households abandon their states in the past few years than others.  While the current administration plans on eliminating the SALT restrictions, it's not clear that states like IL and NY will be welcoming to wealthy investors (only to wealthy politicians).

-Finally, 31% of wealthy investors are moving because they want to be closer to family.  The pandemic has highlighted for all of us the importance of family.  While it has gotten easier to jump on a plane to go visit family members...that right was restricted during the pandemic.  Who would have thought we would be encouraged to stay away from our families during the holidays?  All of these actions have made many of us re-evaluate our primary beliefs.  While we will hopefully be able to re-engage as we did in the past very soon, love of family has been strengthened during the pandemic.

Do I ever regret the move?  Summers are pretty hot in Florida...and I miss October in Illinois...but otherwise I know we made the right decision.  It's unsettling for me that as an adult I can now see how government impacts our lives and decisions.  I'm not sure that as a young person I was aware of that impact...and for some reason, I'm not sure that it was as dramatic in the past.  While I remember my parents and their friends complaining about taxes...I don't remember anyone ever contemplating moving because of them.  I also remember them laughingly calling each other out over politics...that might be in the past as well.

Wealthy investors today, encouraged by the ability to work from home, are more mobile than in the past.  Financial advisory firms need to be able to provide them with the services they need wherever they may be.