The Spectrem Outlook Starts Its Climb Back Up 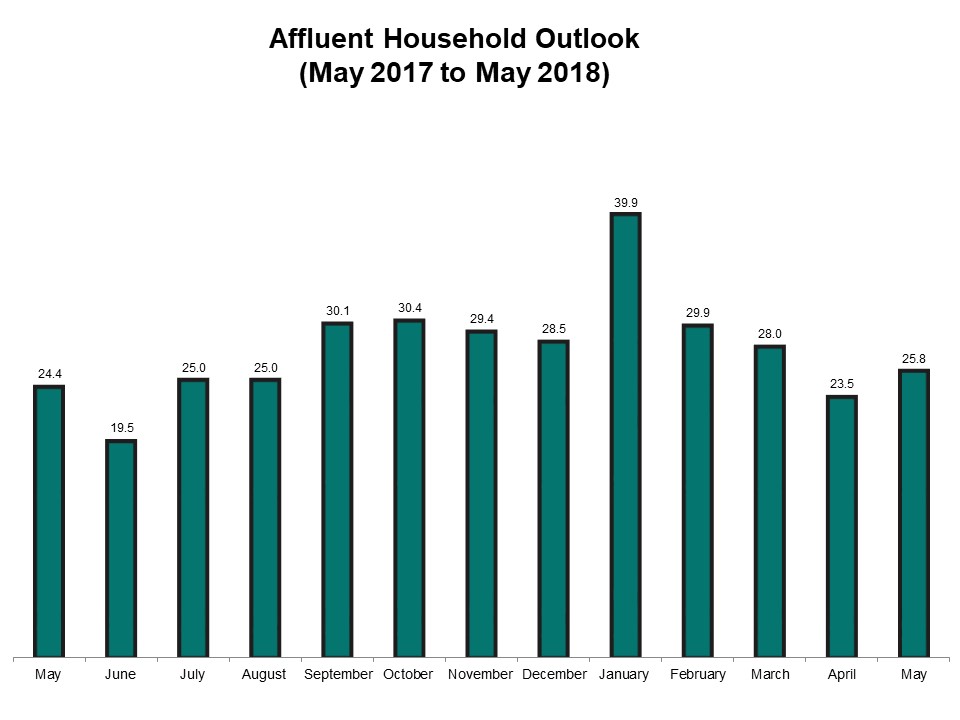 The Spectrem Household Outlook is designed to measure an investor’s optimism about four financial components in their daily lives. In May, that Outlook among all investors was rising among most of those components, and non-Millionaires continued to power the climb.

For four days in late May, investors were asked their outlook on Household Income, Household Assets, Company Health and the Economy, and their answers showed an improved outlook over the very low results from April, when the Outlook rating was at 23.50, a drop of 16 points from January of this year. For May, the Outlook rebounded to 25.80, which is still lower than anytime since August of last year (not including the April rating).

For the second month in a row, non-Millionaires had a higher Outlook than Millionaires (927.71 to 24.85). That has rarely happened in the history of the Spectrem Outlook, as wealthy people are generally more optimistic about financial matters overall.

The bounceback from April was anticipated because April’s numbers were so low. The biggest increase was in the rating on the Economy, which was at 21.20 overall, and up to 24.10 among non-Millionaires.

Another unusual aspect to the Outlook on the Economy is that for the third consecutive month, retired investors see more positives than do working investors. The difference (29.84 to 13.73) has rarely been seen in favor of retired investors in Outlook history.

While male Outlook on the Economy always tops female Outlook, the numbers doubled for women in the month of May.

For the Spectrem Investor Index and Outlook, investors are segmented in many ways, including political affiliation. The Assets Outlook for Republicans and Democrats was down, but Independent investors bounced their rating up to 51.85.

This is the only factor which saw a decrease in Outlook, and it was driven by a decrease in the Outlook among male investors, from 24.40 to 21.94. Household Income numbers do not vacillate much month-to-month, but they have dropped three months in a row, from 29.00 in February to the current level of 18.40.

Among males, the Outlook for Household Income has fallen from 32.10 in February to 21.94 in May, while female Outlook rose for the second month in a row to 12.63 after a disastrous drop to below 9 in March.

Company Health regained part of the 8 points it lost in April. This is a component in which Millionaires and non-Millionaires trade off driving the numbers, and in May, Millionaires reported an 8-point lift from the previous month. Non-Millionaires still had a higher rating than Millionaires – 20.48 to 13.77.

The increase in Outlook over Company Health was standard across all segments of the Spectrem poll.