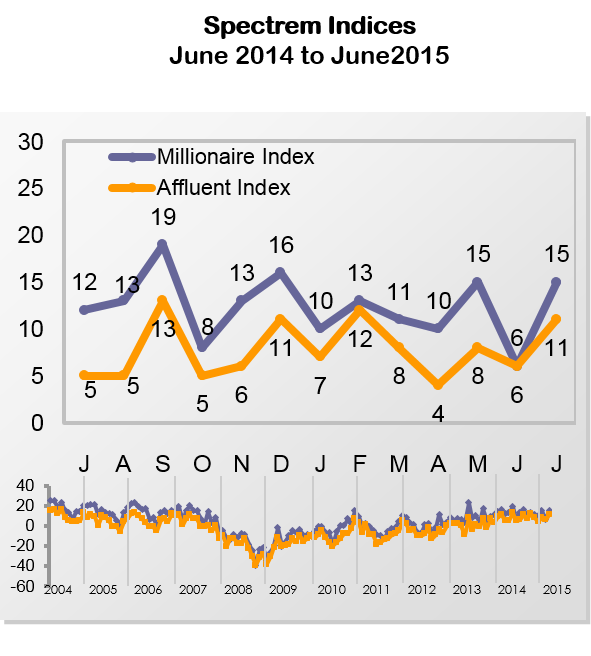 A surge in optimism among Millionaire investors drove an increase in the July Spectrem Affluent Investor Confidence Index (SAICI®) from 6 in June to 11, a five-month high.

The SAICI is six points ahead of July 2104 while the SDMICI is up three points from the same period last year.

The boost in the Spectrem indices is reflected in the willingness of surveyed Affluent investors to move off the investment sidelines. For the first time in five months, there was a decrease in both Millionaires and non-Millionaires who indicated they would hold on the sidelines in the coming month. Among Millionaire investors, intention to invest in Stocks reached a seven-month high, while intention to invest in Equity Mutual Funds increased to a three-month high.

When asked by Spectrem Group what is the one factor that is most affecting their current investment plans the highest percent of Affluent investors cited stock market conditions. Stock market volatility in the first half reflected investor concern over a host of developments ranging from the Greece debt crisis and China’s stock bubble to ISIS and ISIS-inspired attacks abroad and in America and continued speculation over when the Federal Reserve would raise interest rates.

But July saw the release of more encouraging economic reports that reflecting a firmer foundation for the housing market as well as dramatic drops in initial claims for unemployment benefits.