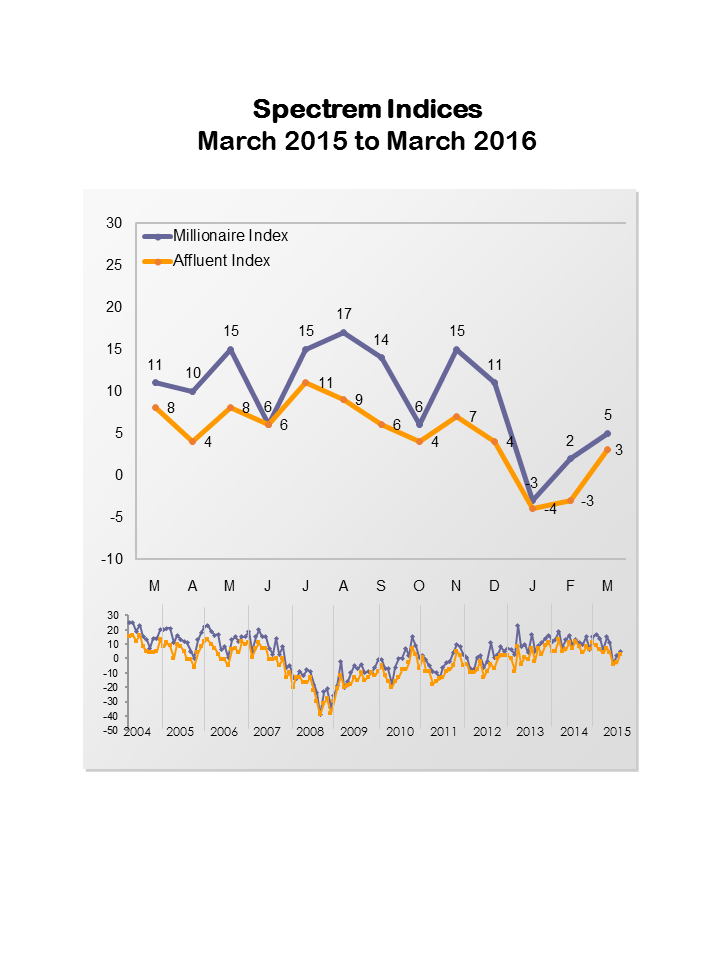 The March indices mark the first time in 2016 that the SAICI and the SMICI are in positive territory. It is also the first time since November-December 2014 that the indices have posted consecutive month gains.

Instituted in February 2004, our indices measure the investment confidence and outlook of the 16MM households in America with more than $500,000 of investable assets (SAICI), and those with $1MM or more (SMICI).  This month’s survey was fielded between March 18-22.

Both indices are down from the same period last year, when the SAICI was at 8 and the SMICI was at 11. An analysis of the data by gender and political affiliation indicate marked differences in investor confidence. The SAICI for Affluent investors who identify as Democrats was significantly higher in March (13) than for Independents (2) and Republicans (-2). The SMICI for Democrats is at 13, compared with 3 for Republicans and 1 for Independents.

The SAICI was at 6 for men and 0 for women, while the SMICI for men was at 9 compared with -2 for women.

One driver of our Investor Confidence indices is the Spectrem Affluent Household Outlook, a monthly measure of investor confidence over the next 12 months in four financial factors that impact their daily lives. The March Spectrem Affluent Household Outlook posted a double-digit gain in March. Affluent investors indicated a surge in confidence over the economy, inspired perhaps by the February jobs report that was released at the beginning of March and found that U.S. employers added a robust 242,000 jobs.

“Equity investment is flat among Affluent investors, but a surge in confidence in the economy helped to lift the Spectrem investor confidence indices in March,” Spectrem President George H. Walper, Jr. observes. “Both indices in March for Affluent investors who identify as Republicans are significantly lower than they are for Democrats, an indication that the divisiveness of the 2016 presidential race is taking its toll on investor confidence.”