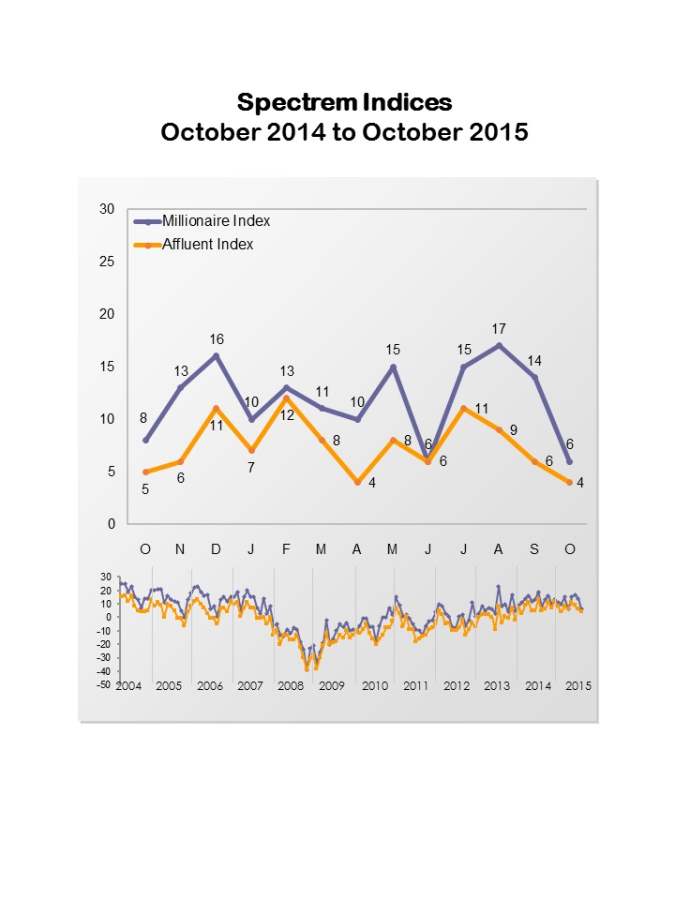 The indices measure the investment confidence and outlook of the 16MM households in America with more than $500,000 of investable assets (SAICI), and those with $1MM or more (SMICI). This month’s survey was fielded between Oct. 14-21, 2015.

This is the third consecutive month that the SAICI has posted a decline and is the smallest gap between the Affluent and Millionaire indices since June 2015, when both were at 6.

Driving the declines in both indices were concerns about stock market conditions. Our most recently monthly survey finds that Affluent investors consider stock market conditions to be the primary factor affecting their current investment plans. There have been several months of market volatility. The most recent Labor Department jobs report, released in the first week of October, found that the U.S. economy created 142,000 jobs, well below the forecast of 200,000 jobs. The Dow closed up 1.2 percent that day, but not before it initially dropped 258 points, the biggest such market swing in four years.

Market volatility was also triggered by concerns over the slowdown of China’s economy, the world’s second largest, and over continued speculation as to when the Federal Reserve would raise interest rates which have been a near-zero since December 2008, are driving Affluent investors to the investment sidelines.

Tellingly, there was an increase in Affluent investors who reported an increase in their intention to invest in Cash, a more conservative investment vehicle.