Social Media and Mobile Technology Not Wasted on the Young 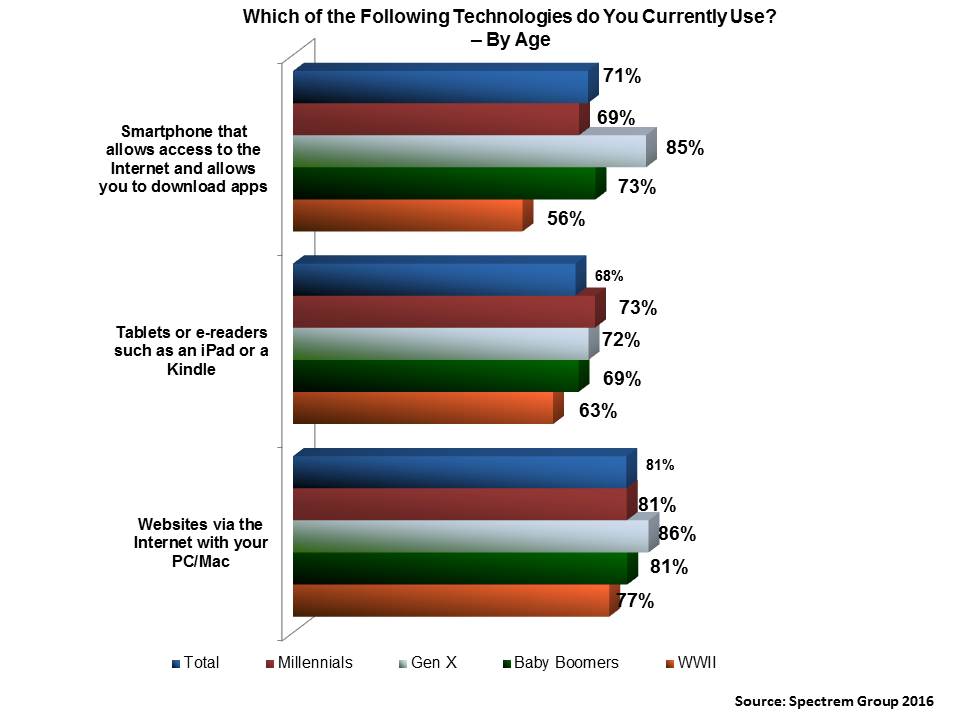 It has been more than 50 years after Bob Dylan cautioned older generations that the times they were a changin’. Not even the troubadour prophesizer could have anticipated the epochal societal transformation wrought by technology and the internet, which has changed the way people communicate, shop, view content, and even invest. But it’s hardly a young person’s province anymore.

According to Spectrem Group’s recent research, older people are increasingly assimilating social media and mobile technology. They may generally not be “first adapters” of the latest gadgets, but notions that they are tech-averse are as outmoded as jokes about older people not being able to program their VCR.2016 Millionaire Investor: Using Social Media and Mobile Technology in Financial Decisions finds that social media and mobile technology usage among Millionaire Baby Boomers and those of the World War II generation ages 71 and up (with a net worth between $1 million-$5 million, not including primary residence) has markedly increased as this decade has unfolded.

On the 140-character front, Twitter usage has tripled in the past six years among Millionaire Baby Boomers. Millionaire seniors have still not embraced Twitter as they have other social media platforms, but while usage is comparatively small (only 5 percent), it does represent a near 70 percent increase over 2010.

“Baby Boomers pride themselves on being a forward-thinking generation and so it is not surprising that they would not want social media and mobile technology to pass them by,” said Spectrem Group president George H. Walper, Jr. “And while seniors may not be as tech-savvy, they too want to be able to communicate via the platforms that their children and grandchildren are using and mine the information resources of the internet that make their lives easier.”

When it comes to mobile technology, at least two-thirds of Millionaire Baby Boomers and more than half of Millionaire seniors report they use a PC/Mac, smartphone and tablet, but they are lagging behind their younger counterparts in using them for more common financial activities such as for an airline boarding pass, to pay for daily incidentals such as coffee or pastries, or to pay at restaurants and grocery stores.

Conversely, both age groups are more likely than younger Millionaires to use their PC/Macs to follow the news, check their account information, obtain market updates, conduct investment research, obtain advice from financial experts, and to read articles on financial topics and products. Millennials are generally more likely to use their tablets and smartphones for these and other activities.

Top Takeaways for Advisors and Providers

·         Make your websites and apps accessible for all ages. An unhappy experience could send investors to more user-friendly competitors.

·         Make sure your content appeals to a wide range of ages with articles, blog posts and videos that would engage older users as well as Baby Boomers and younger generations.

·         Conduct “tech-support” sessions with your investors on how to use their smartphones or tablets to help familiarize them with its features. Show them how to easily access information from your site.