There Is So Much To Worry About 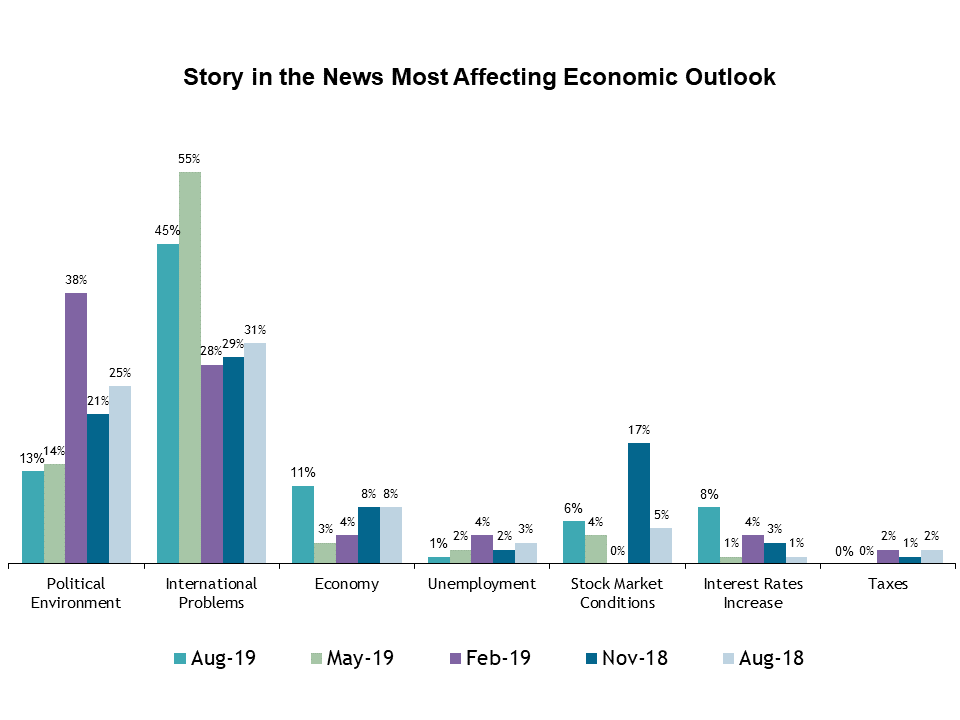 It is difficult to know what is uppermost in the minds of wealthy investors today as they try to determine what to do with their investable assets. There is just so much they can worry about.

As part of its monthly survey of investors for the Spectrem Investor Confidence Indices, there is one question asked on a rotating basis that points to immediate concerns related to their household finances and feelings toward the American economy. In August, investors were asked “What is the story in the news that is most affecting your economic outlook?”

Just as it was when the question was asked in May of this year, the most popular response was “international problems”. In May, when Iran, China, Venezuela and Afghanistan were all in the news, 55 percent of respondents selected that answer. In August, that answer received only 45 percent of the nods, but that still outweighed all other possible responses.

But that 10 percent difference was made up by the other issues which beset the modern American investor.

The second most-popular response in August was “the political environment’’, which was selected by 13 percent of investors. The other choice receiving at least 10 percent of responses was “the economy’’, which got 11 percent of the responses, up from only 3 percent in May.

One other topic that saw a huge jump in responses was “interest rate increases.” In August, there was no suggestion that interest rates were going to increase, but President Donald Trump and Federal Reserve Board Chairman Jerome Powell engaged in a back-and-forth debate about whether the benchmark interest rate needs to be dropped for the second time this summer in response to economic concerns over a recession. Such talk sparks newfound concern among investors.

Over the last five times this rotating question was asked of investors, “international problems” has always been the No. 1 concern, and “political environment’’ has been the No. 2 issue. The key difference is the degree to which other topics come up.