Reaction to Growing Number of Millionaires 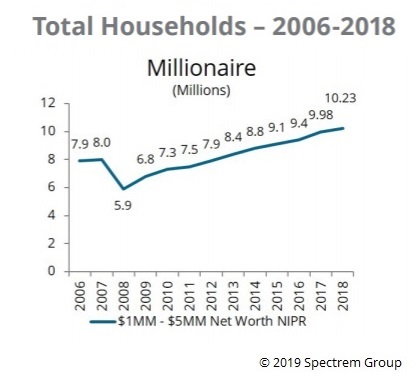 For the 10th consecutive year, Spectrem’s Market Insights report determined that there were more Millionaires in America than in the previous year. From 2017 to 2018, the number of Americans with at least $1 million in net worth (not including the value of their primary residence) grew from 11.5 million to 11.8 million, a growth of 300,000 people, less than 3 percent growth. The increase from 2017 to 2018 was actually less than half the increase from 2016 to 2017, when there were 700,000 more Millionaire Americans over the 12-month period.

Every year, the news of additional Millionaires draws attention from the financial media. Bloomberg noted that the number of Millionaires was roughly the same as the entire population of European countries such as Sweden or Portugal.

“Some of this slowing in wealth creation has to be expected due in part to softening equity markets, after almost a decade of very strong returns, coupled with the early effects of the tax reform on affluent households,’’ said Greg Soueid, head of wealth management at advisory firm Treliant, as quoted in an article from Bloomberg News. “That said, the growth rate of wealthy households continues to outpace middle-class growth rates.”

Byron Ellis, the managing director of United Capital Financial Advisors, noted the Market Insights research in his weekly blog while making the point that being a Millionaire ain’t what it used to be.

“I remember a reporter asking me decades ago if someone could retire comfortably on one million dollars,’’ Ellis wrote. “Back then I said it depends—and I still say the same thing. It is estimated that 5–6% of Americans are millionaires, according to Spectrem Market Insights 2019. While this is a small percentage, there are still many people who have hit that lofty number. But does that number guarantee you happiness? Does that number even get close to what you need to be financially independent? I say no, in most cases.”

Beyond the sheer numbers, ThinkAdvisor pointed out that Spectrem demographics indicated that Millennials now make up the largest portion of the $25 million segment. That information came from the 2018 biannual study of the $25 million plus investor population, The Wealthiest Americans.

The study also looks at investors with a net worth over $25 million, and there have been years when that population has grown significantly since 2008.