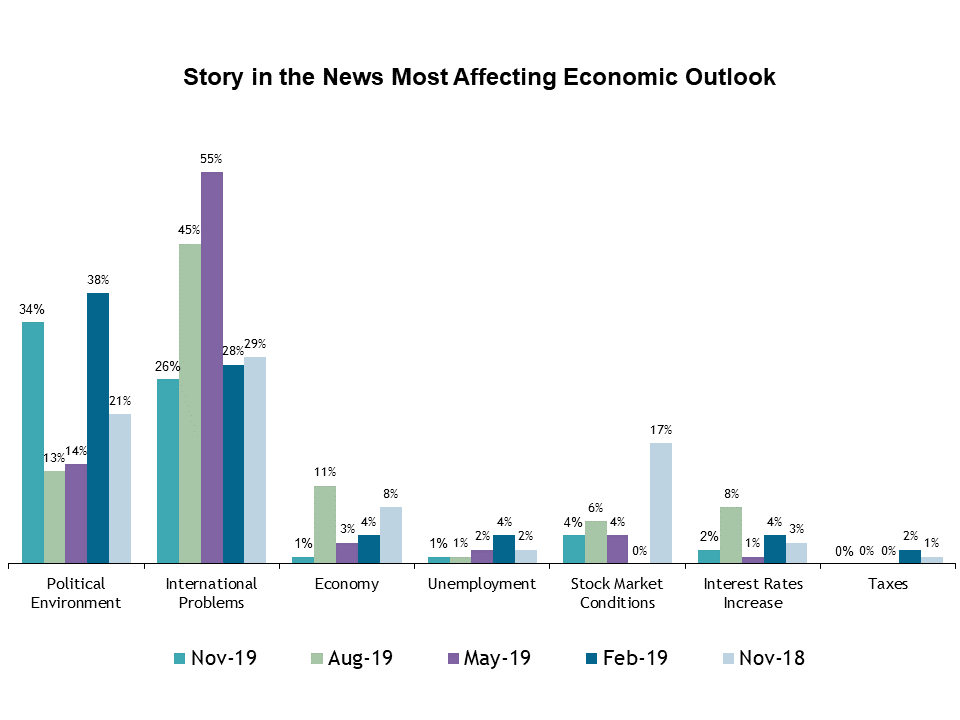 For investors considering their personal economic situation, there are only two topics that matter today: domestic politics and global politics.

Every month, as part of Spectrem’s Investor Confidence Indices, investors are asked one question that requires an open-ended response, and always deals with their current approach to household financial matters. In November, the question was “What is the story in the news that is most affecting your economic outlook”? The questions are asked on a rotating basis every three months.

In November, 34 percent of investors responded that the domestic political environment was most affecting their attitude toward their personal economics. In February of 2019, that response was as high as 38 percent, but it more than doubled from the last time it was asked, in August, when only 13 percent claimed politics was bothering them more than other news stories.

The second most frequent response in November was international problems, which can be described as trade negotiations with China, or continued haranguing over Brexit, or international intrigue related to Ukraine and Russia. There is a lot of news being created internationally, and 26 percent of investors pointed to that storyline as the one most affecting their economic outlook. However, that is almost half of the 45 percent of responses from August.

Millionaires were more likely to point to international issues than those with less than $1 million in net worth (31 percent to 26 percent). But that difference was reversed in looking at domestic politics, considered more affecting by affluent investors.

A surprising 43 percent of retired investors said domestic politics was the most important news story in November, compared to just 29 percent of working investors, who were more likely to point to international issues.

With 60 percent of responses taken up by those first two choices, the rest of the choices were way down from previous months. Only 4 percent said stock market conditions were affecting them (probably in a positive way currently).