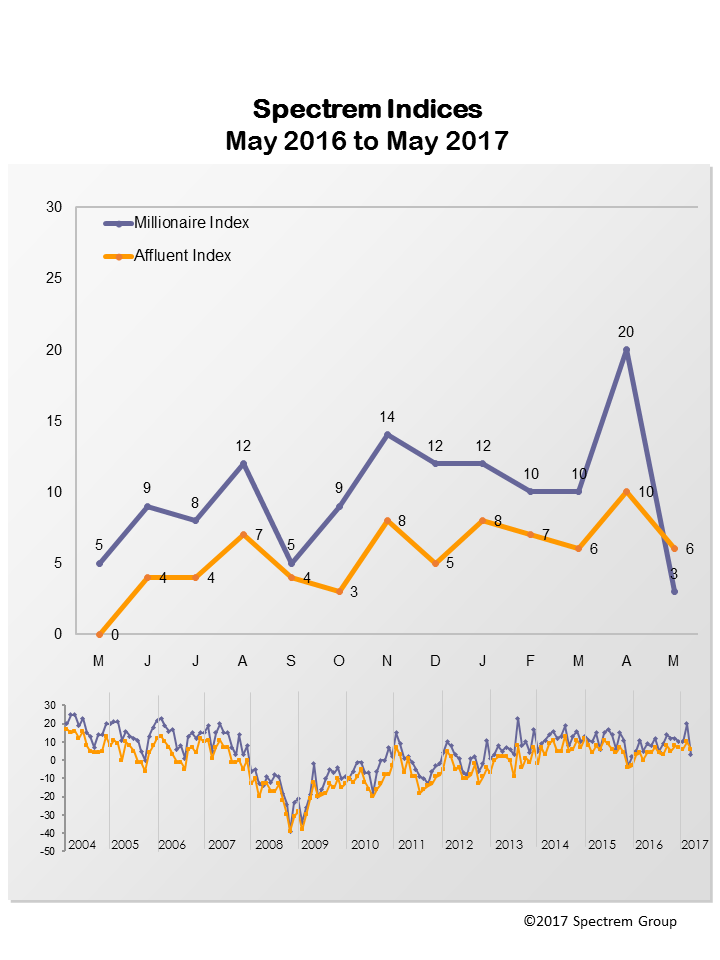 The political atmosphere in the United States is as toxic as ever, and the lack of cohesive governance has had its affect upon the investment confidence of affluent investors.

For the first time in its 13-year history, the Spectrem Millionaire Investor Confidence Index (SMICI) experienced a drop of 17 points in one month, falling from the four-year high of 20 in April to 3, the lowest mark in more than a year.

For the first time since May of 2011, the Spectrem Affluent Investor Confidence Index (SAICI) is higher than the SMICI. While the SMICI dropped 17 points, the SAICI dropped only 4 points, indicating the confidence level of non-Millionaires is surprisingly greater than that of the wealthier investors.

The monthly Spectrem Affluent Investor Confidence index tracks changes in investment sentiment among the 17 million households in America with more than $500,000 of investable assets. The Spectrem Millionaire Investors Confidence Index (SMICI) reflects the investment sentiment of households with more than $1 million in investable assets. The May fielding was conducted from May 19-May 23.

The significant drop in the Millionaire index comes from an increase of 15% who plan to avoid investing in the coming month. More than 39% said their intention for the month was to not invest, and that is the highest percentage of Millionaires pulling away from investments since December of 2013.

The notable decrease among Millionaires in investment intentions for stocks, stock mutual funds, individual bonds, and bond mutual funds may be a result of the overwhelming effect of the confusing political environment. Asked which stories in the news most affect their economic outlook, 54 percent of all investors said political environment was a factor, and no other story drew more than 14 percent of respondents (taxes).

The Spectrem Millionaires Household Outlook, a monthly measure of the long-term confidence in four financial factors that impact a household’s daily life, dipped almost 3 points to 24.40, its lowest level November of 2016, when politics again was key to everyone. Confidence dipped in all four categories – Household Income, Household Assets, Company Health and Economy.

By comparison, the non-Millionaires were much more willing to invest, with percentage increases in every category except cash investing (which is the least confident form of investment options). The percentage of non-Millionaires choosing not to invest dropped to 41.6 percent, only 2 percent higher than that of Millionaires. Confidence actually rose for non-Millionaires in Household Income (up more than 16 points to 24.78, the highest level since June of 2015) and Household Assets.