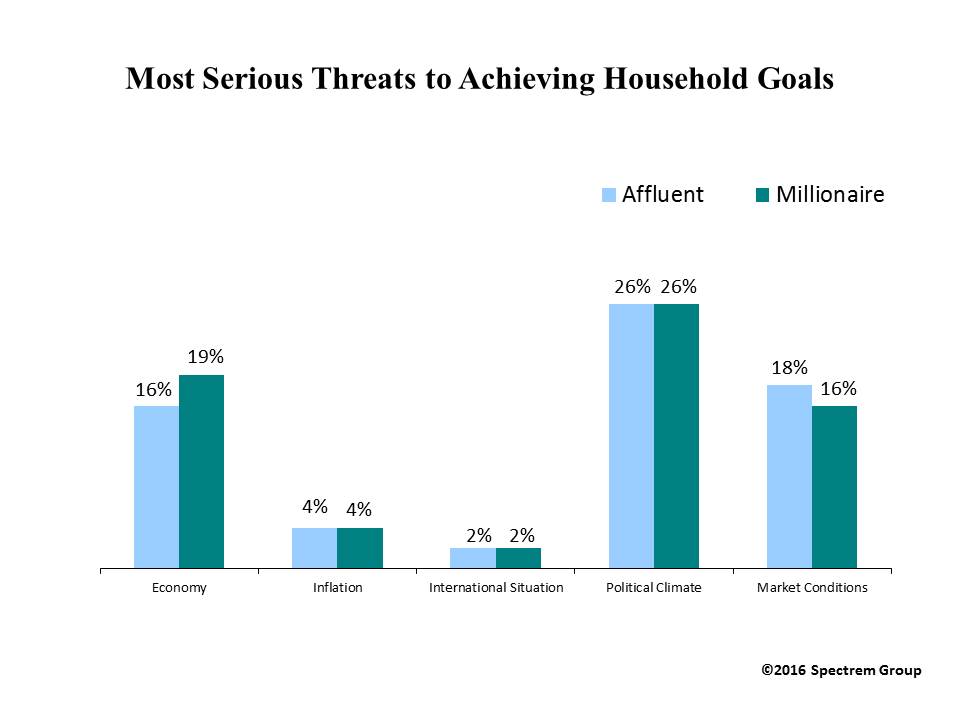 With less than two months before the presidential election, Affluent investors cannot seem to take shelter from the political climate. When asked what they consider to be the most serious threat to achieving their household’s current financial goals, the largest percentage of Affluent investors (26 percent) responded, “the Political Climate.” In comparison, 18 percent responded “Market Conditions” and 16 percent “the Economy.”

Less than 5 percent consider either “Inflation” (4 percent) or the “International Situation” (2 percent) to be the most serious threat to achieving their household’s financial goals at this time.

The 26 percent of Affluent investors who consider the political climate to be the most serious threat to achieving their household’s current financial goals is a gain of 11 percent since June 2016 when this question was last asked, and the highest response to this question since September 2010. That was the year of the midterm elections, in which the Tea Party was a rising force and the Republican party recaptured the majority in the U.S. House of Representatives with a gain of 63 seats, the largest seat change since 1948.

This survey was fielded between Sept. 16-21.  Last month was a particularly volatile one in this increasingly tight presidential race in which both candidates suffer historically low favorable ratings among the electorate. Clinton’s health issues became a trending news story when it was revealed she had been diagnosed with pneumonia, which her campaign did not disclose. On Sept. 16, two black men in different cities, Tulsa, Oklahoma and Charlotte, North Carolina, were shot by police officers. The incidents renewed focus on race relations and law enforcement, pivotal issues in this presidential race.

The coming months will tell whether the political climate and the results of the presidential election will have an impact on Affluent investors’ investment mindset. When asked  last July by Spectrem Group what factor was having the most significant impact on their investment plans, less than 10 percent cited the Political Climate vs. the 30 percent who said Stock Market Conditions. Separate 2016 Spectrem Group wealth research finds that less than 30 percent of investors indicated they would not make major investment and financial decisions until after November