What Do Plan Participants Worry About? 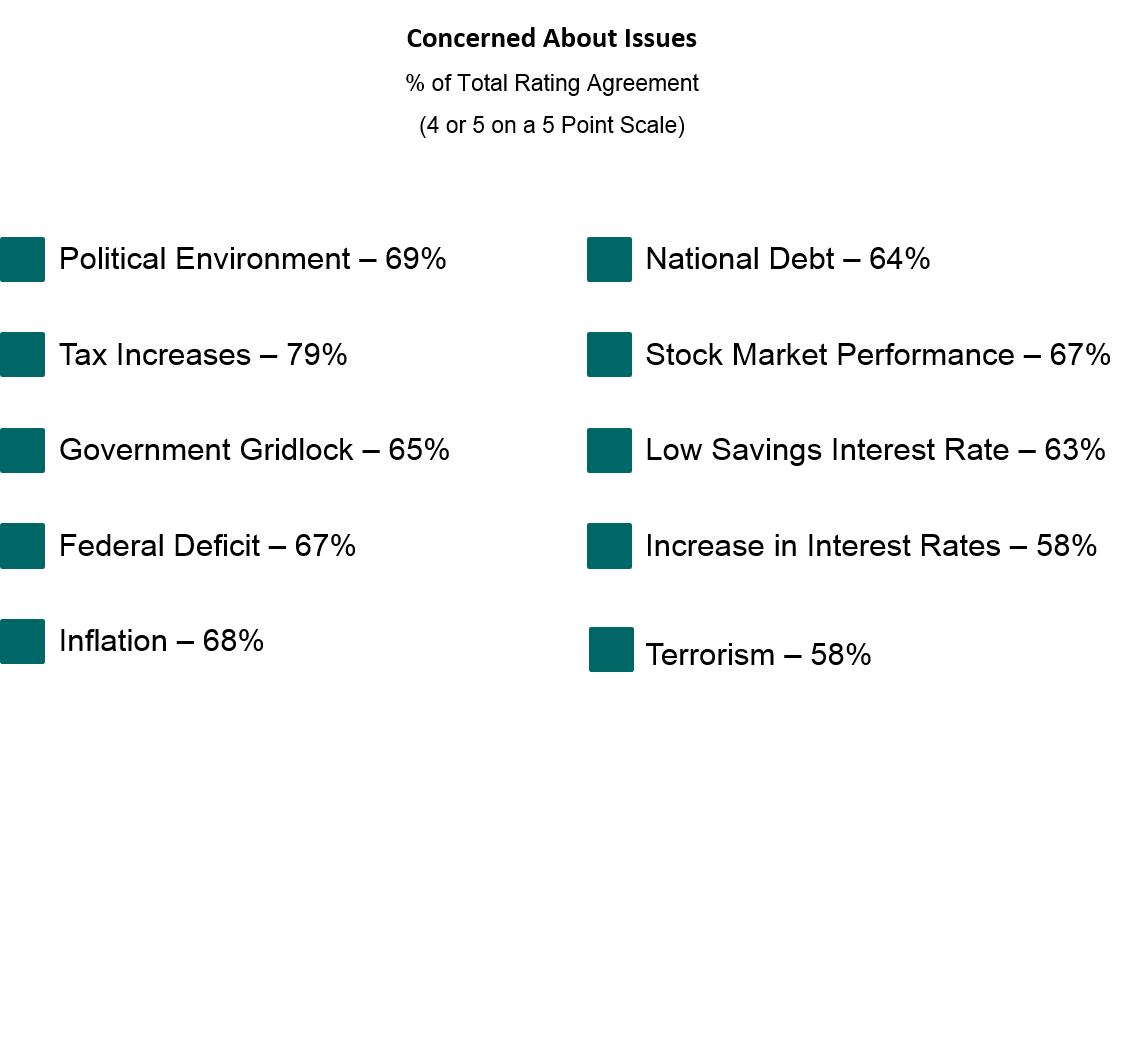 DC plan participants are literally invested in securing for themselves a sound financial future that will allow them to live comfortably in retirement. It is instructive, then, to learn what national issues and personal concerns are of uppermost concern to them.

More than terrorism, climate change or race relations, issues that have dominated the news of late, DC plan participants are mostly focused on national economic issues that can directly impact their portfolios, according to the Spectrem report Financial Attitudes and Concerns of DC Participants.

The highest percentage (79 percent) are most worried about tax increases, the Spectrem report finds. Other issues of concern DC plan participants ear could negatively impact their portfolio include inflation (68 percent), the federal deficit (67 percent) and the national debt (64 percent).

So it is not surprising that a high percentage of respondents indicate they are concerned about the fractious political environment (69 percent), the perception that the White House and lawmakers cannot or will not work together to fix the economy. Partisanship and government gridlock only exacerbate the wariness and uncertainty felt over economic issues by DC plan participants, especially among respondents who are Baby Boomers ages 55-64 and seniors over the age of 65 (roughly 80 percent). Millennial aged respondents aren’t as focused on this issue (54 percent)

A near-equal amount express concern about stock market performance, which is often driven by investor concerns over news events and the state of the economy, For example, 58 percent of respondents to the Spectrem survey said that they are concerned about an increase in interest rates, which have not been raised in more than a decade. Speculation on when the Federal Reserve will raise them—possibly as early as September--has caused volatility in the market.

When it comes to personal issues, these, too, have implications for retirement security for the DC plan participant. Not surprisingly, the highest percentage (67 percent) are focused on maintaining their current financial position, but beyond that, a majority are concerned about health issues related to themselves and their spouse, and having someone to take care of them in their old age.

Even among affluent households, health care costs can be seen as a threat to retirement security.

Another health-related concern for roughly half of surveyed DC plan participants is having the responsibility for their aging parents, a prospect that can affect their retirement savings.

As can be expected, health-related concerns, as well as concerns about spending their final years in a care facility are heightened among women, who are often placed in the role of family caregiver, and seniors ages 65 and up, the Spectrem report finds.

Tellingly, nearly four-in-ten surveyed DC plan participants (39 percent) indicate concern about getting adequate help and advice to allow to achieve their financial goals. The more you and your advisors know what is on the minds of DC plan participants, the better able you will be to develop educational materials and services to help them overcome these concerns and plan for their retirement with confidence.