Plan Participants and Their Attitude Toward Investing 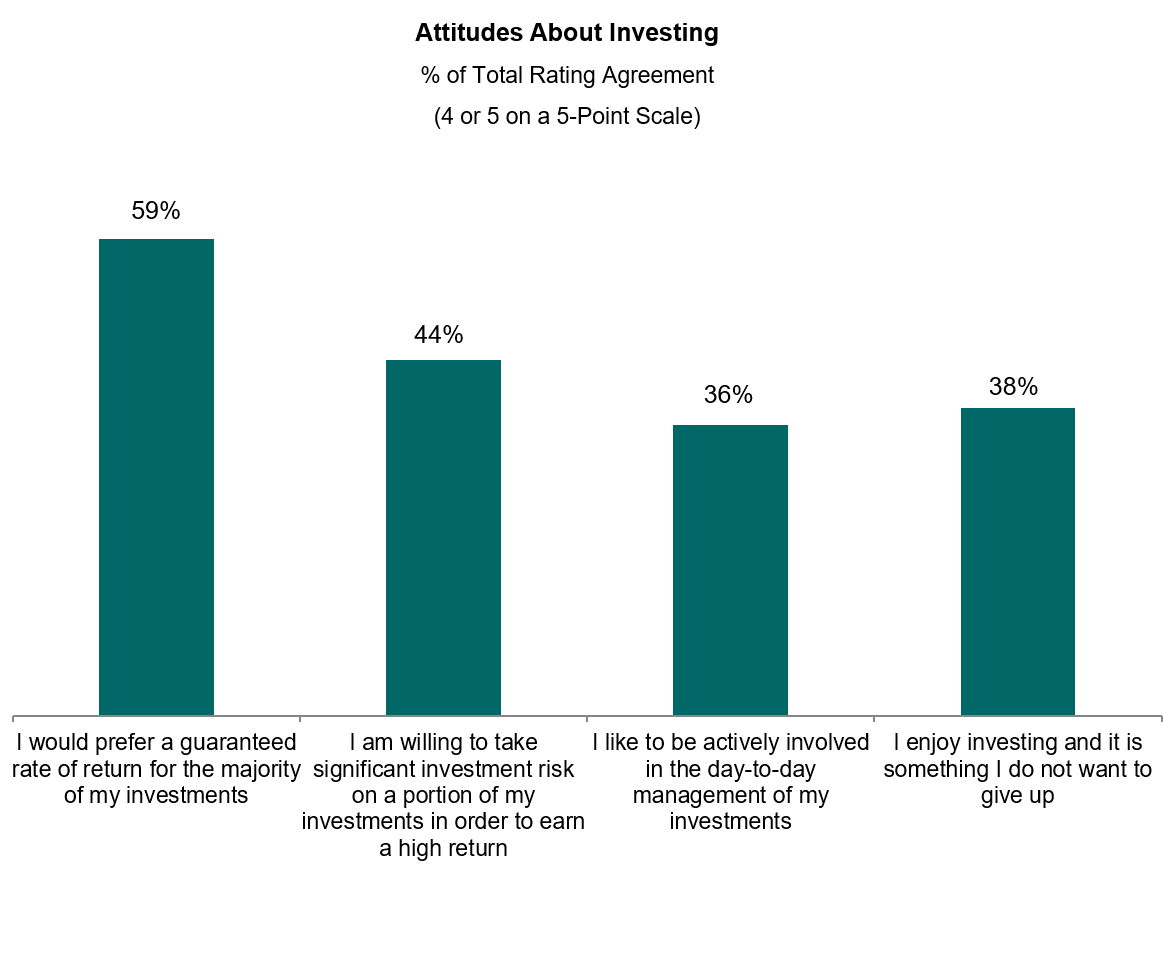 There are very few arguments against the idea of a defined contribution plan. The plan participants have a desire to put money into a vehicle that will serve as an investment and is untouchable until retirement age without paying a penalty.

Contributing to a defined contribution plan is a risk-free enterprise, which is good for plan participants, because they are generally adverse to great risk when it comes to investing.

Our latest report into the defined contribution market, Financial Behaviors and the Participant’s Mindset, asks participants to rate themselves in terms of their investment attitudes. The results indicate the split between safety and risk-taking is not that large.

“Investors who participate in a defined contribution plan do so because of the safety and wisdom surrounding the idea of putting funds away for retirement,’’ said Spectrem president George H. Walper Jr. “It is not surprising that those investors report a below-average interest in risk-taking when it comes to their investments.”

Almost 60 percent of DC plan participants say they would prefer a guaranteed rate of return for the majority of their investments, which aligns with the fact that 67 percent of participants consider themselves either moderate or conservative toward investing. A sizable 12 percent put themselves down as conservative.

On the other side, 44 percent of plan participants are willing to take significant investment risk on a portion of their investments in order to earn a high return. That compares to only 39 percent of Millionaires with a net worth between $1 million and $5 million who say they would take that significant risk, according to our wealth segmentation research.

From an age standpoint, Millennials are the most likely to take a risk (53 percent) while the interest in risk-taking drops as age increases, down to just 25 percent of World War II plan participants.

As history suggests, males (49 percent) are more likely than females (39 percent) to want to take a risk.

Millennials again lead the report in terms of enjoying investing, with 43 percent saying they do not want to give up investing. That percentage drops as age increases. There is also a wider range of responses between male and female regarding the pleasure that comes from investing (48 percent of males to 30 percent of females).

Considering the toxic atmosphere surrounding the current Presidential nominating races, many Americans are biding their time with their investment plans to see how the election turns out. That’s especially true of World War II plan participants, of which 29 percent say they are going to not make any major financial decisions until the election is over. Only 10 percent of Millennials have the same opinion.

Again, considering the usual caution women report toward investing, it is interesting that 26 percent of male plan participants claim they are going to wait out the election process before making a major financial decision and only 14 percent of women are going to do so.