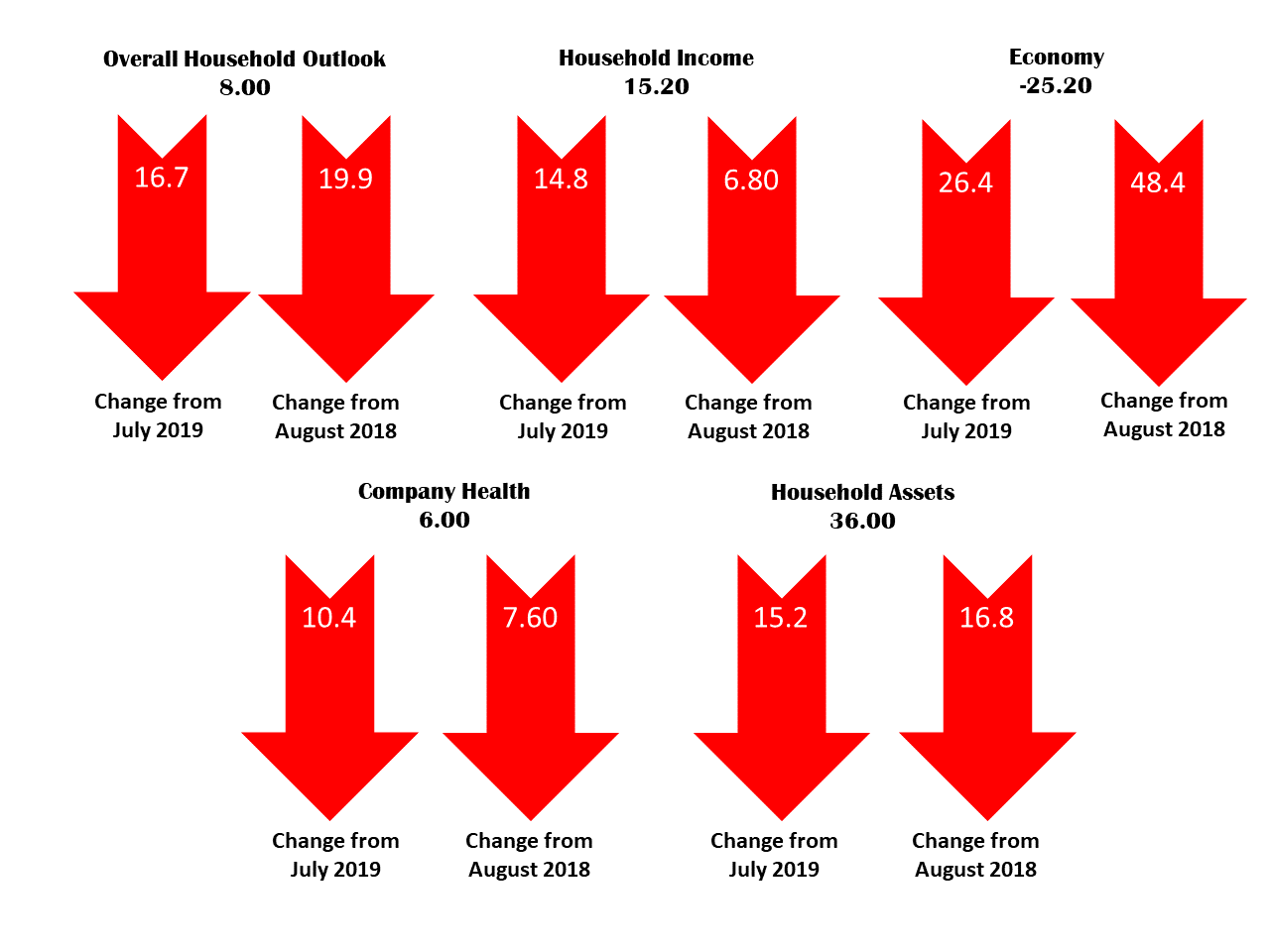 Combine the influences of an inverted treasury note yield curve and an extended and sometimes nasty trade war with China, and what do you get?

A severe decrease in the outlook of American investors.

Spectrem’s Household Outlook, part of the Spectrem Investor Confidence Indices, reflected a wide concern about the economy in August due to several reports of an inverted Treasury bond yield curve in the month of August. The Dow Jones Industrial Average dropped 800 points in one day in mid-August as the yield curve inverted again and the U.S. continued barking at China about the trade dispute.

Spectrem’s Household Outlook dropped overall from 24.70 to 8.00, a decrease of 16.7 points. That is the largest decrease in one month since August of 2014. It dropped the Outlook to its lowest level since February of 2016, which was the last time the Outlook was in single digits.

The Spectrem Household Outlook measures an investor’s optimism about four financial components in their daily lives, including Household Income, Household Assets, and the Economy. According to the August survey conducted Aug. 16-21, the overall Outlook for the economy fell among all investors from 1.20 to -25.20, the first time in negative territory since February and the lowest rating since November of 2012.

Despite strong rebuttals from administration officials that the economy is strong and a recession is not coming, investors are paying more attention to the signals from the inverted treasury note yield and the understanding that a bull market will not last forever.

The Outlook for the economy overall fell into negative territory and fell hard. The last time the Outlook for the economy was as low as -25.20 was just before the 2012 Presidential election, when it dropped 38 points over concern whether President Obama would stay in office or be replaced by Republican Mitt Romney. While the inverted yield curve is a signal for an upcoming recession, the continued negotiations with China seemed to stall or even take a step backward in August, causing investors to think hard about the prospects for the American economy in the coming months.

Even among Republican investors, who received word from President Trump’s administration that the recession is not forthcoming, their Outlook for the economy was sliced by almost 20 points, from 43.21 to 24.42.

The steadiest of the four Outlook components, household assets, still felt the drop in August, with a 15-point decrease, the largest since Dec. 2015-Jan. 2016. At 36.00, it is at its lowest level since January of this year.

Another steep drop. Almost half of the Outlook rating for household income was lost in August. It is now also at its lowest point since January of this year.

Among working investors, for whom income is the most likely to change in an economic slide, the Outlook for income fell from 41.01 to 24.43. The outlook among non-Millionaires fell from 25.41 to 7.96.

The trade war with China is impacting both American technology firms and American farmers, and the government has not yet suggested trying to save the technology giants. The company health measure is in single digits for the first time since November of last year. It was in October of 2018 that the Outlook for company health last lost as much as 10 points on a register that usually ranges between 0 and 20.