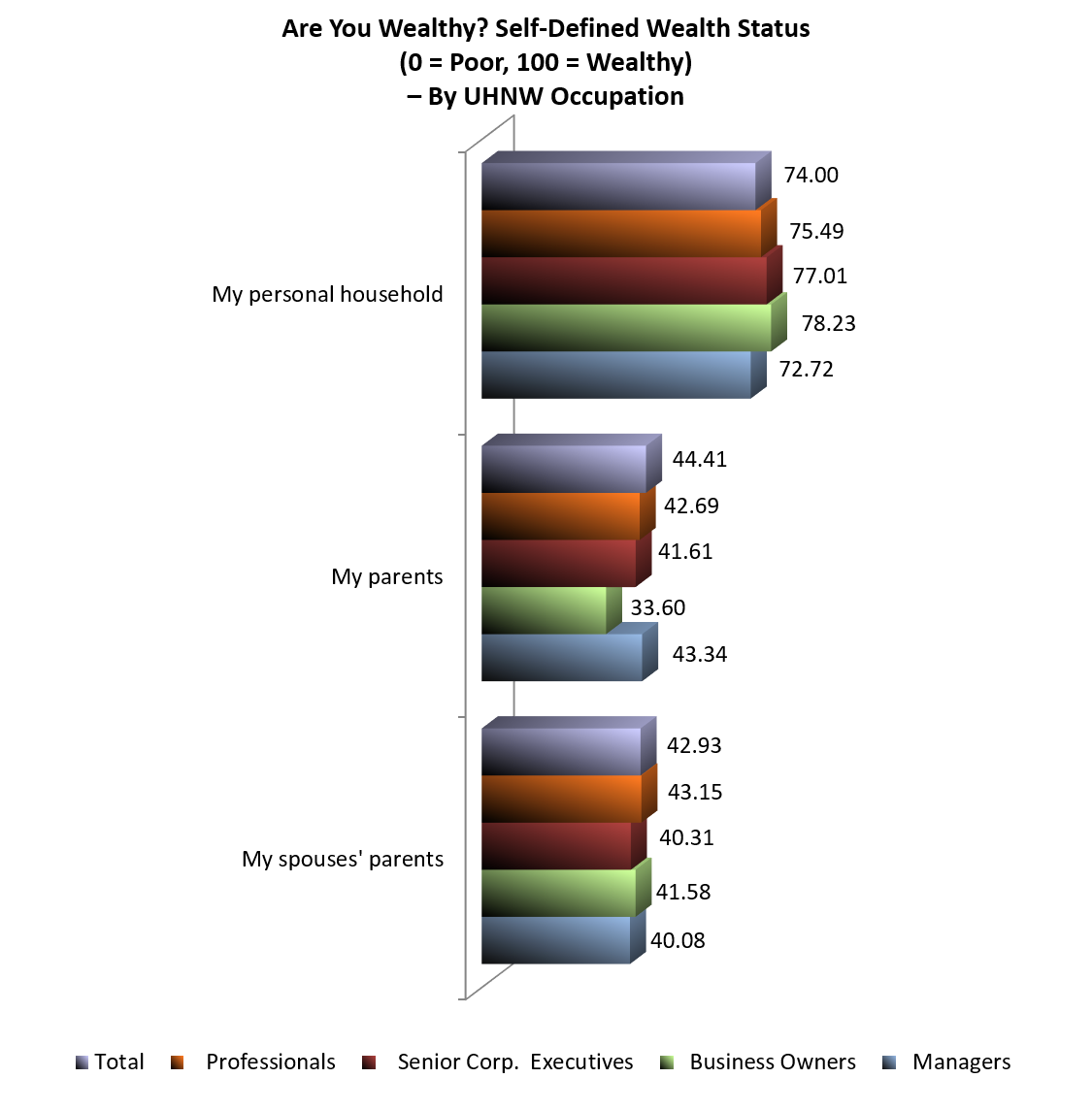 It’s perhaps the second question strangers ask each other. The first is ”What is your name?” and the second is “What do you do?”

Our occupation defines us, at least in the eyes of others. While most people have significant lives outside of their workplace, occupation allows others to come up with a quick analysis of who you are.

Occupation can have a resounding effect on the financial attitudes of Americans. Whether a person’s viewpoint comes a result of the growth of an industry, or comes from the success of a personal company, an investor’s optimism and outlook differ based on their occupation.

Our wealth segmentation series study Financial Behaviors and the Investor’s Outlook segmented investors with a net worth between $5 million and $25 million by their occupation. These Ultra High Net Worth investors were segmented into Professionals (doctors, lawyers, accountants, etc.), Senor Corporate Executives, Business Owners, and Managers.

Perhaps the most interesting aspect of the occupational information was the difference between investors based on occupation and their attitude toward their current wealth and their financial future. Several questions related to their outlook indicated that people in some high-level positions have different perceptions about the present and the future.

Starting with their current financial status, investors were asked if they were wealthy, with instructions to place their wealth on a 0-to-100 scale, with “wealthy’’ at the 100 mark. Overall, these UHNW Investors put themselves at 74.00, but separated by occupation, only the Managers were below that mark, rating themselves at 72.72. The Business Owners gave themselves the highest mark at 78.23, followed by Senior Corporate Executives (77.01) and Professionals (75.49).

Investors were also asked to rate their parents and their spouse’s parents in terms of wealth. The Business Owners, with the highest regard for their own wealth, had their parents rated lowest, at just 33.60. All occupations put their parents below the “50” mark.

Business Owners consistently rated higher than the other professions in terms of optimism. Asked if the statement “I expect my personal financial situation will be stronger one year from now than at present”, 51 percent of Business Owners agreed, well above the average of 43 percent and even farther above Professionals, with only 37 percent agreeing with the statement.

The investors were also asked about their outlook related to their children. Asked if they agreed with the statement “I believe when my children reach my current age, they will be better off than I am right now”, 36 percent of Senior Corporate Executives agreed, topping the list according to occupation. Managers were the most pessimistic regarding their children, with only 28 percent agreeing with the statement.

Given a list of non-financial concerns, most UHNW investors were positive about the future. The greatest concern overall reported was for the health of a spouse (55 percent) with Professionals (60 percent) and Business Owners (61 percent) the highest in that category.

Business Owners reported the highest level of concern over what is going to happen to them way down the road. Sixty percent said they have concerns about whether they will spend their final years in a care facility, and 51 percent expressed concern about whether they will have someone to care for them in their old age. Both of those percentages were well over the average.

Assessing an investor’s outlook toward his current financial status and his hopes and concerns about the future should be one of the first characteristics determined when working with a new investor. Those with a low level of concern and an optimistic outlook might be easier to sell to than those with high levels of concern and a pessimistic outlook.

Conversely, those with high levels of concern can be approached with information and data about investment markets that indicates a positive outlook for the future.