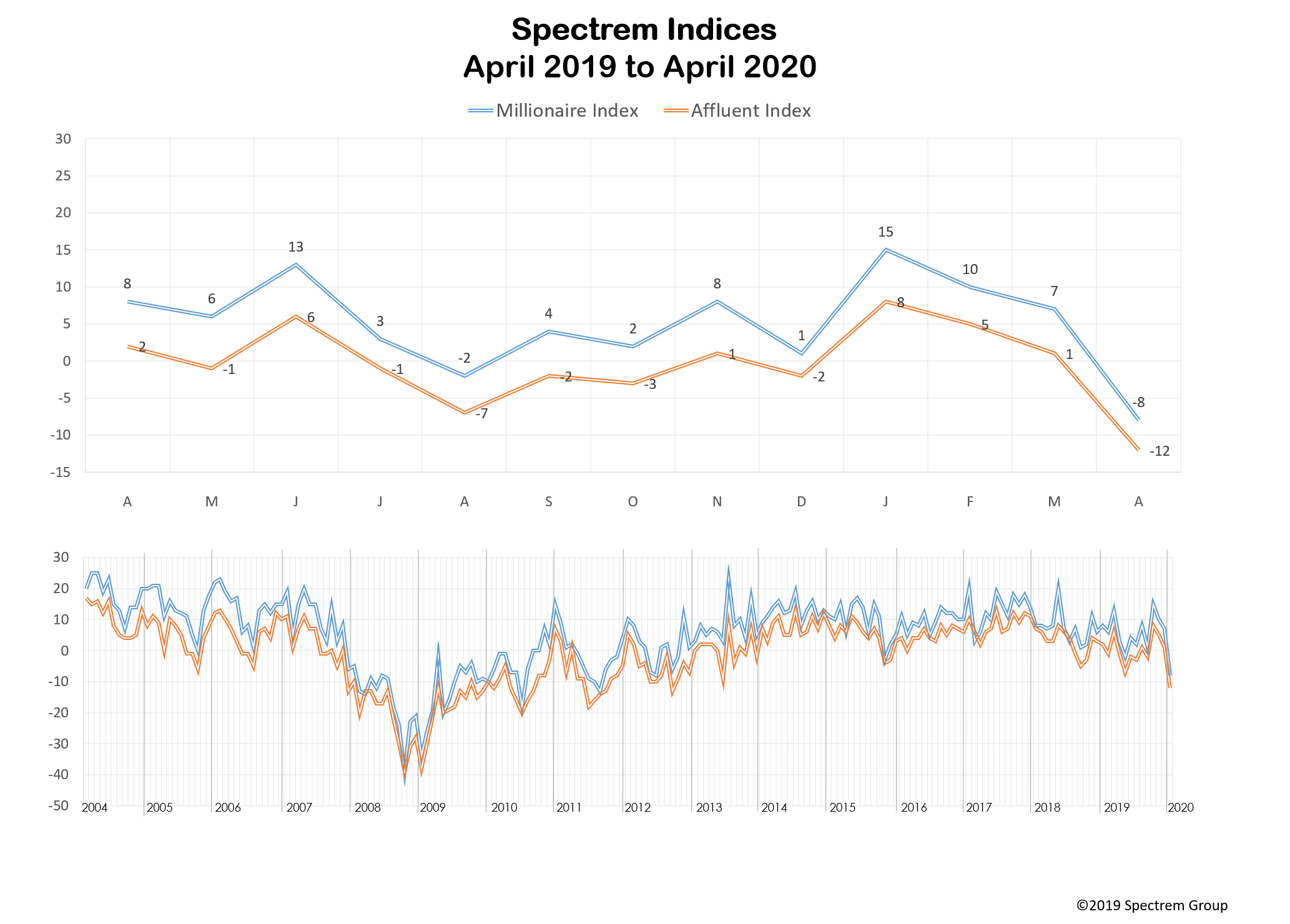 Confidence and outlook are two different characteristics of investors, but both of those traits were crushed by the performance of the stock market and economic indicators in April.

The question is “just how south did they go?” And “how long will it take for those numbers to recover?”

The SMICI, which always trends more positive than the SAICI, fell into negative territory in April, down from 7 in March to -8 in April. That marked the first negative rating among investors with $1 million in investable assets since August of 2019, although the SMICI registered in positive double digits only twice in 2019 and was as high as 15 in January of 2020, before the word “coronavirus” became well known.

The SAICI, which measures confidence among investors with a net worth of $500,000 or more (and includes the Millionaires referenced above), dropped from 1 to -12. That was the first negative response in four months, although the SAICI spent seven of the 12 months of 2019 in negative territory.

The last time those two ratings were that far in the red was in November of 2012, and election months tend to cause a dip in both confidence meters. But, for a real comparison, note that in November of 2008, both of those numbers reached -39, the lowest ratings ever, as a reflection of investor confidence from the conditions created during the Great Recession.

It took almost two years for the SMICI to reach 0, but only four months later was as high as 17. The SAICI did not reach positive numbers until February of 2011,

The factors which go into determining the SAICI and SMICI include interest in additional investment in the stock market, bond markets, or cash investments. It also includes those investors not interested in increasing their investment allotments or even pulling back, and that point reached 39.2 percent in April. Note that interest in extended investing was actually lower in November of 2019 at 42.4 percent.

The Spectrem Household Outlook, another measure taken monthly, indicates how investors feel about their household finances, with a look at household assets, household income, company health and the economy in general. Outlook tends to provide a glimpse at projected attitudes, but for April, the investor Outlook fell from 9.30 to -24.50, the first negative rating since Feb. of 2013 and the lowest Outlook rating since February of 2009.

The largest drop among the four components was in the investor Outlook for household assets, an examination of investable assets. That Outlook fell from 25.60 in March to -22 in April, almost 50 points in reverse course.