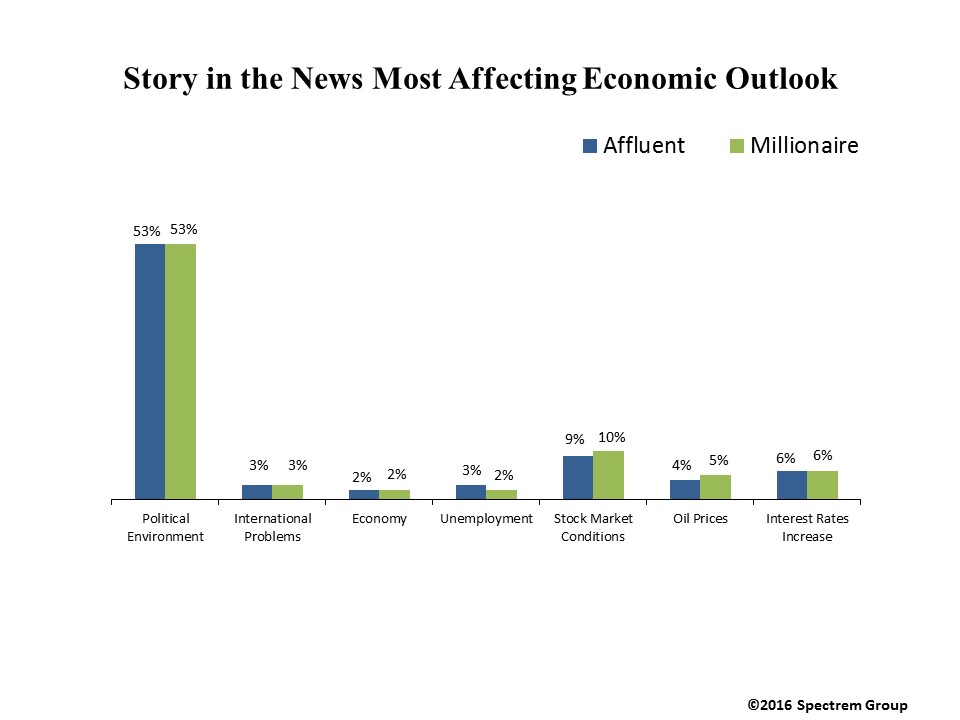 On Feb. 22, 2017, the Dow Jones industrial average hit an unprecedented 20,775. Since Donald Trump was elected in November, the Dow has set 28 new record closing highs. The S&P 500 and Nasdaq also reached record highs during the week of Feb. 20. CNBC reported that the three large-cap indexes along with the Russell indices, have gained more than 10 percent since the presidential election.

But that is not the news that is most affecting the economic outlook of Affluent investors, according to a Spectrem Group survey fielded in February. Stories related to President Trump’s first month in office are having the most effect, just over half (53 percent) of these investors responded in the survey.

Fifty-three percent is a marked decrease from December 1, 2016 when this survey question was last asked. At that time—less than one month after the election--83 percent of Affluent investors said that news stories about the political environment were having the most effect on their economic outlook. Prior to that, 61 percent responded similarly to this survey question in August, 2016, as the presidential campaign was about to enter its final phase.

In comparison, only 9 percent of surveyed Affluent investors said news stories about  “stock market conditions” were having the biggest effect on their economic outlook. This is up from 2 percent in December 2016 when this question was last asked. Just 2 percent said “the economy,” while 3 percent said “unemployment” and “international problems,” respectively, 4 percent said “interest rates” and 6 percent said “taxes.”

The contentious tone of the news coverage of President Trump’s first month in office was in part one of the reasons for the dips in February of both the Spectrem Affluent Investor Confidence Index (SAICI®) and the Spectrem Millionaire Investor Confidence Index (SMICI®). Investors may be buoyed by the robust performance of the markets, but continuous news stories reporting turmoil in Washington, D.C., coupled with the president calling out the mainstream media in interviews, personal appearances and on Twitter underscored Affluent investors’ concerns.

Beyond stock market performance and other financial factors, how lawmakers work (or do not work) to find solutions to these pressing issues will continue to shape the economic outlook of Affluent investors.