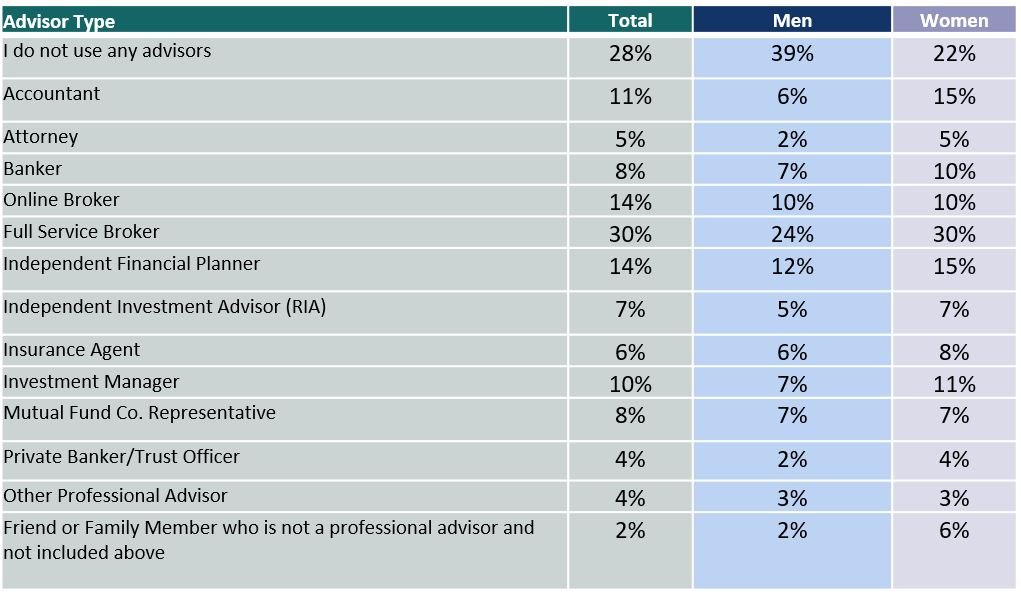 The differences that exist between men and women extend to their attitudes towards investing.

From their attitudes towards working with professional advisors to their willingness to risk portions of their portfolio for greater return, men and women approach the matter of investing with unique plans and goals.

Our newest white paper High Net Worth Men Vs. Women delineates those differences. By examining responses to a series of questions related to investing strategies and aspirations, the study points out the differences between men and women in key investing areas.

“The differences between men and women in regards to investing indicate that women prefer safety and security and are willing to ask for advice,’’ said Spectrem president George H. Walper Jr. “These differences may seem stereotypical but are, in fact, key bullet points to make an investor-advisor relationship work.”

Part of that willingness to work with professionals relates to the willingness of female investors to admit they are lacking in financial investment knowledge. More than one-third of female investors indicate they are not at all knowledgeable or not very knowledgeable about financial products and investments, while only 15 percent (almost 20 percent fewer) men acknowledge their lack of knowledge.

Women also express less interest in the daily management of investment accounts. While 50 percent of male investors say they like to be actively involved in day-to-day participation in their investments, only 36 percent of female investors agree.

Perhaps due to the increased or more frequent dependence on advisors, female investors report a higher degree of overall satisfaction with their advisors in terms of knowledge, responsiveness and most notably performance (74 percent of females to 66 percent of males).

“Advisors need to be aware of the ways in which men and women differ in regards to investing, while also noting those ways in which they are similar,’’ Walper said. “It cannot be assumed that any one investor will act according to their gender preferences, but advisors need to be aware that such preferences are likely to occur and should investigate the attitudes of each investor accordingly.”

Gender differences in investing must also be a consideration when dealing with a married or cohabitating couple. While they may be making investment decisions together, it is wise to make certain both voices are being heard and considered before a final decision is reached.