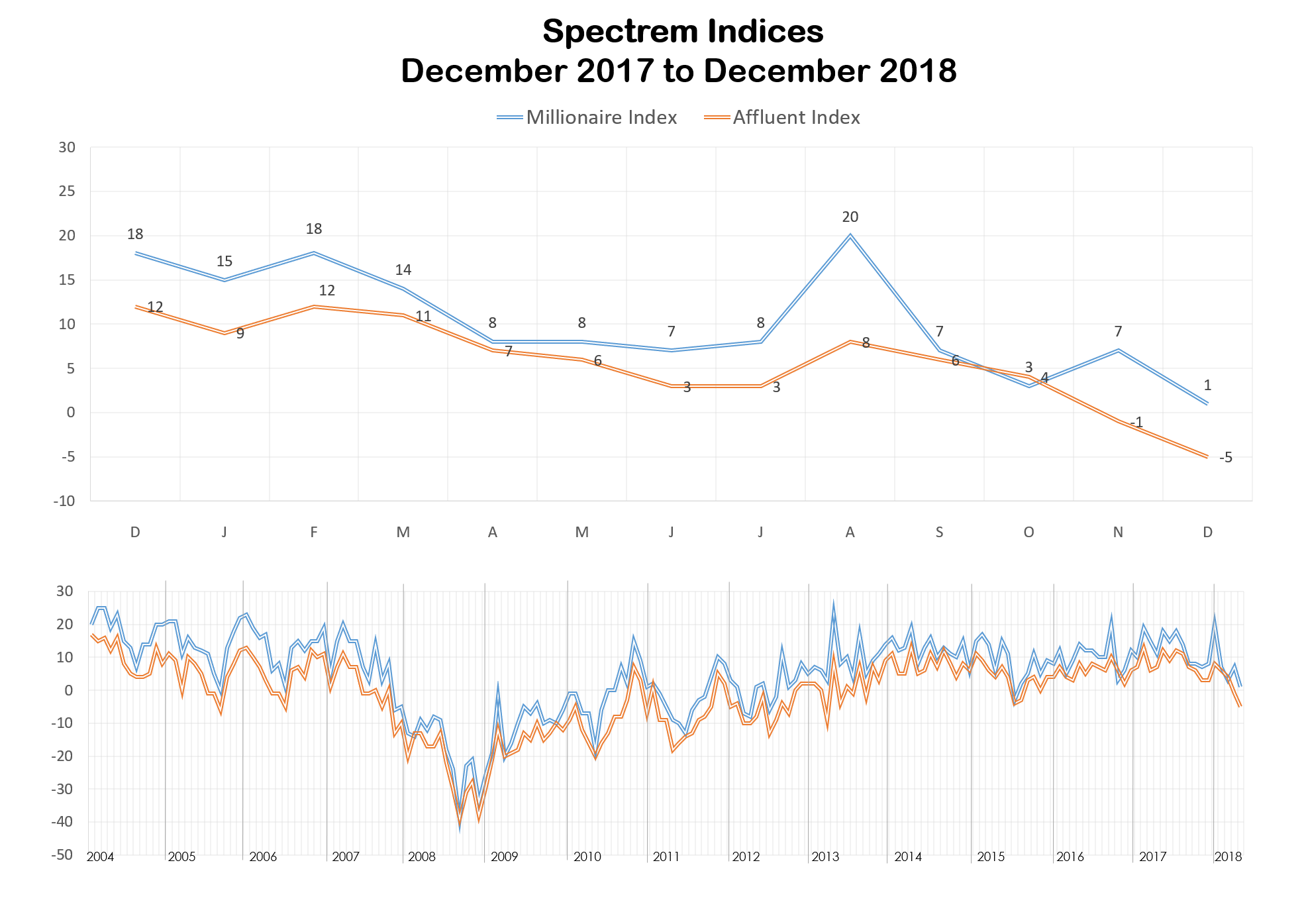 The December stock market decline is a true measure of investing conditions in the United States, according to the investors surveyed for the Spectrem Confidence Indices.

The Spectrem Millionaire Investor Confidence Index fell to 1, its lowest level in almost three years and 19 points below the high of 20 reached just three months ago.

Only 23.2 percent of affluent investors said they were going to invest additionally in the stock market, a five-year low. Mutual Fund investing in both stocks and bonds rose slightly among all investors.

But Millionaire investors reported a drop in interest in both Stock and Stock Mutual Fund investing, with Stock investing down to 27.8 percent, the lowest level since May of 2017.

The monthly SAICI tracks changes in investment sentiment among the 17 million households in America with more than $500,000 of investable assets. The SMICI reflects the investment sentiment of households with more than $1 million in investable assets. The December investor  fielding took place between December 13-18, 2018. During that time, the Dow Jones Industrial Average started at 24,575 and ended at 23,675 and in the 10 days prior to the fielding had dropped 1,200 points overall.

The stock market slide appeared to be a reflection of concern over continued trade negotiations with China combined with poor home and automobile sales. The negative results came despite positive numbers in job growth and unemployment during December.

Stock and Bond Mutual Fund investing rose slightly among all investors, but that was driven by an increase in investing by non-Millionaires. Millionaires reported a slight increase in Cash investing to 23 percent.

One of the most revealing factors in the index is those Not Investing, which in December actually dropped slightly for both non-Millionaires and Millionaires. However, non-participation among non-Millionaires remained above 50 percent at 54.8 percent, a historically high level of investors backing away from further investment.

The Spectrem Household Outlook, a measure of the long-term confidence among investors in four financial factors which impact a household’s daily life, rose slightly among all investors to 14.50, but remained below 20 for the third consecutive month. Millionaire Outlook fell from November to 17.66 and was under 20 for the third consecutive month as well. Non-Millionaire Outlook rose to 11.29 after being below 10 in November for the first time since February of 2016.

Overall, the Outlook rating for Household Income and Company Health both rose, but the Outlook for the Economy fell to -15.60, the lowest level in more than two years.