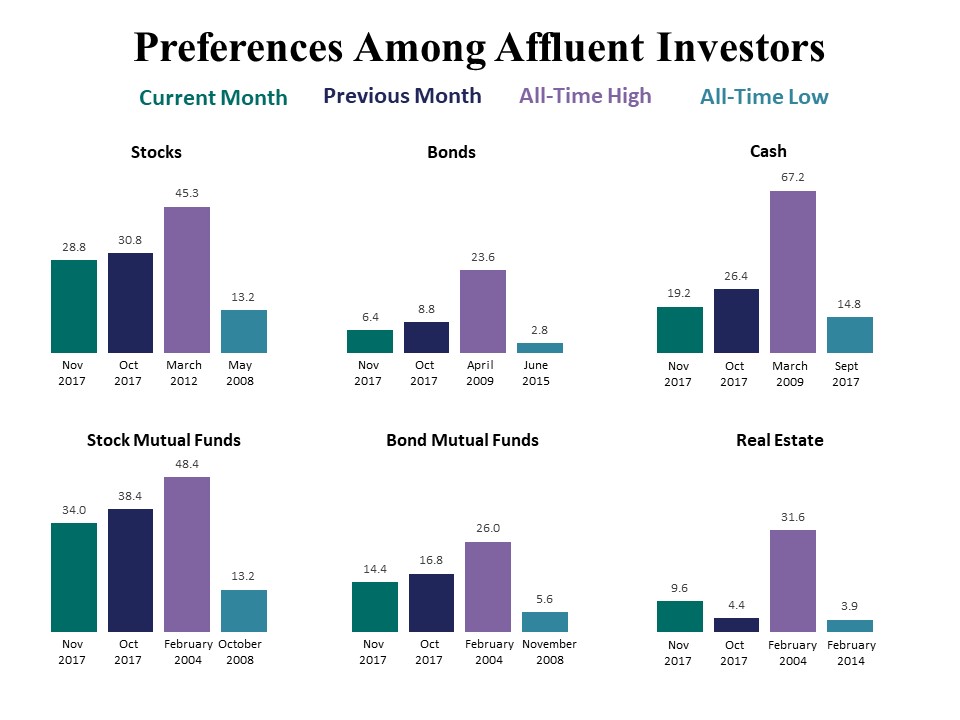 The stock market continues its historic rise, but the future remains murky as the federal government tries to alter its tax laws. Millionaires are responding with cautious pessimism.

According to the November Spectrem Millionaire Confidence Index (SMICI®), more investors with $1 million in investable assets are choosing to stand pat with investments rather than increase their exposure. Millionaires recorded drops in every investment category in the Index with the exception of Real Estate, and there was an increase in Millionaires who are not increasing their investments at all in December.

On the other hand, the November Spectrem Affluent Investors Confidence Index (SAICI®) among those investors with $500,000 or more of investable assets recorded a slight increase stock and stock mutual fund investing and a few more investors getting back into the investment mood.

From a historic standpoint, all investment intentions are in a normal range with the exception of Millionaire Real Estate, which at 12.6 percent is its highest mark since July of 2014.

Among Non-Millionaires, the male Confidence Index was at 11 in November and at 2 for women. Historically, this is also a smaller-than-usual difference in confidence between men and women.

Republicans indicated a higher level of involvement than in the previous month, with only 24.27 percent not investing further in December. Of those planning to invest, the highest interest among Republicans was in stock investing, with 33 percent planning to invest. Democrats were more likely than Republicans to invest in Bonds and the Bond Mutual Fund market.

More retired investors are going to sit out the month of December, as they record less interest in investing in everything but Real Estate. Meanwhile, among working investors, there is an increased interest in Stock, Individual Bond, Bond Mutual Fund and Real Estate investing.