Millionaires and their Dependency on Advisors 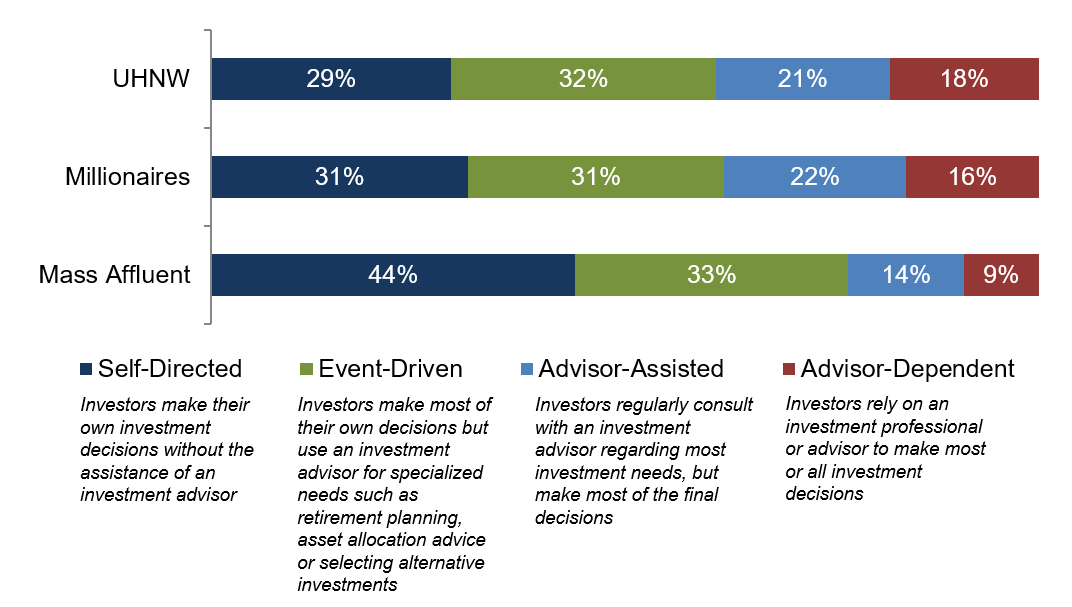 Seventy-eight percent of Millionaires use a financial advisor to some extent. But, investors use advisors to varying degrees, and it is very easy to miss-read a client’s perspective on what kind of relationship they want to have with an advisor.

Our wealth segmentation series regularly asks investors to describe their level of advisor-dependency, and then surveys them on matters of personal concern, national concern and on issues related to finance and investment. The results show that Millionaires differ from others based on their advisor-dependency, or lack thereof.

Our study separates Millionaire investors into four categories of advisor-dependency: Self-Directed (those who make their own investment decisions with assistance), Event-Driven (those who only use advisors for specialized issues such as retirement planning or alternative investments), Advisor-Assisted (those who regularly consult advisors but make most of their own decisions) and Advisor-Dependent, which is self-explanatory.

Most Millionaires are either Self-Directed (31 percent) or Event-Driven (31 percent). Only 16 percent claim to be Advisor-Dependent. Keep in mind that 78 percent use an advisor on some level. The Self-Directed investor will accept advisor assistance but may not place any of their assets with that advisor.

An Advisor-Assisted investor may actually have indicated that the advisor has full discretion. However, with these investors, advisors must realize their client wants to be very involved with the investment decisions. If the client is not treated in this manner, the client will not be satisfied with the advisor relationship.

There are also differences in optimism among Millionaires of different advisor dependency levels. Forty-five percent of Self-Directed Millionaires believe their financial situation will be better one year from now, while only 34 percent of Advisor-Dependent Millionaires are that optimistic.

Millionaires were asked about their level of concern on national issues, and in general the more advisor-dependent the investor, the more concerned they are. The greatest separation was in financial matters such as inflation (63 percent of Advisor-Dependent to 48 percent of Self-Directed) and increases in the interest rates (45 percent to 34 percent).

Advisors must engage with clients and prospect to determine the advisor behaviors that clients prefer. If advisors ignore client desires related to advisor services, client satisfaction will be affected. Advisors will end up spending a great deal of their valuable time with Self-Directed investors who have no intention of placing investments with the advisor and do not place the same value on an advisor relationship.