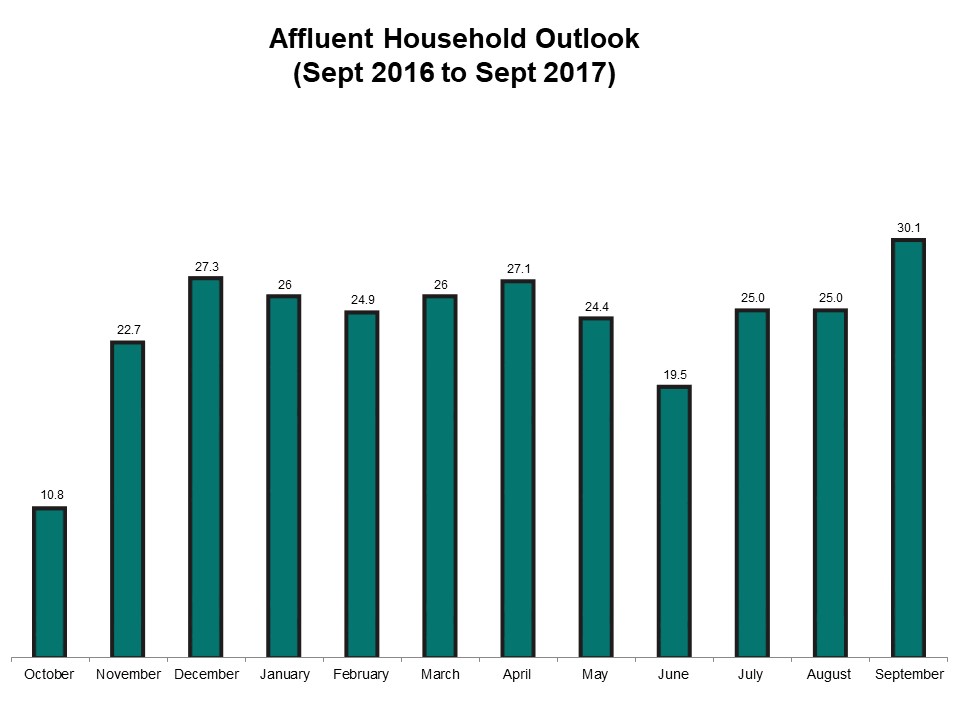 The Spectrem Household Outlook asks investors to rank four financial components in their lives in terms of how they perceive them to be progressing. In August, non-Millionaires had a higher Outlook than Millionaires, which almost never happens. In September, the Outlook returned to normal, with Millionaires registering an Outlook of 36.91, the highest mark since April of 2007, before the Great Recession. Non-Millionaires slotting it at 22.95, a drop of more than 4 points from the previous month.

The rise in Household Assets results from increased confidence among Millionaires, lifting their rating to 70.31, the highest mark for assets among Millionaires in more than 12 years. Investors are asked to guess whether the value of their household assets will be higher or lower over the next 12 months, and obviously, Millionaires overwhelmingly believe they will rise.

That feeling is not universal, however. The Household Assets number rose among men and fell slightly among women. Likewise, it rose among Republican investors and dropped among Democratic investors.

Millionaires are on the high side of the overall number with a rating of 34.37, while non-Millionaires fell to 22.13, their second consecutive drop. But the big news in Household Income is that females reported a higher number than males, 28.57 to 28.33.

Male, female, Republican, Democrat, retired, working - every segment of investors registered an improved score on the Economy in September.

There was a slight increase among Republicans rating Company Health, but there were slight decreases among males overall.