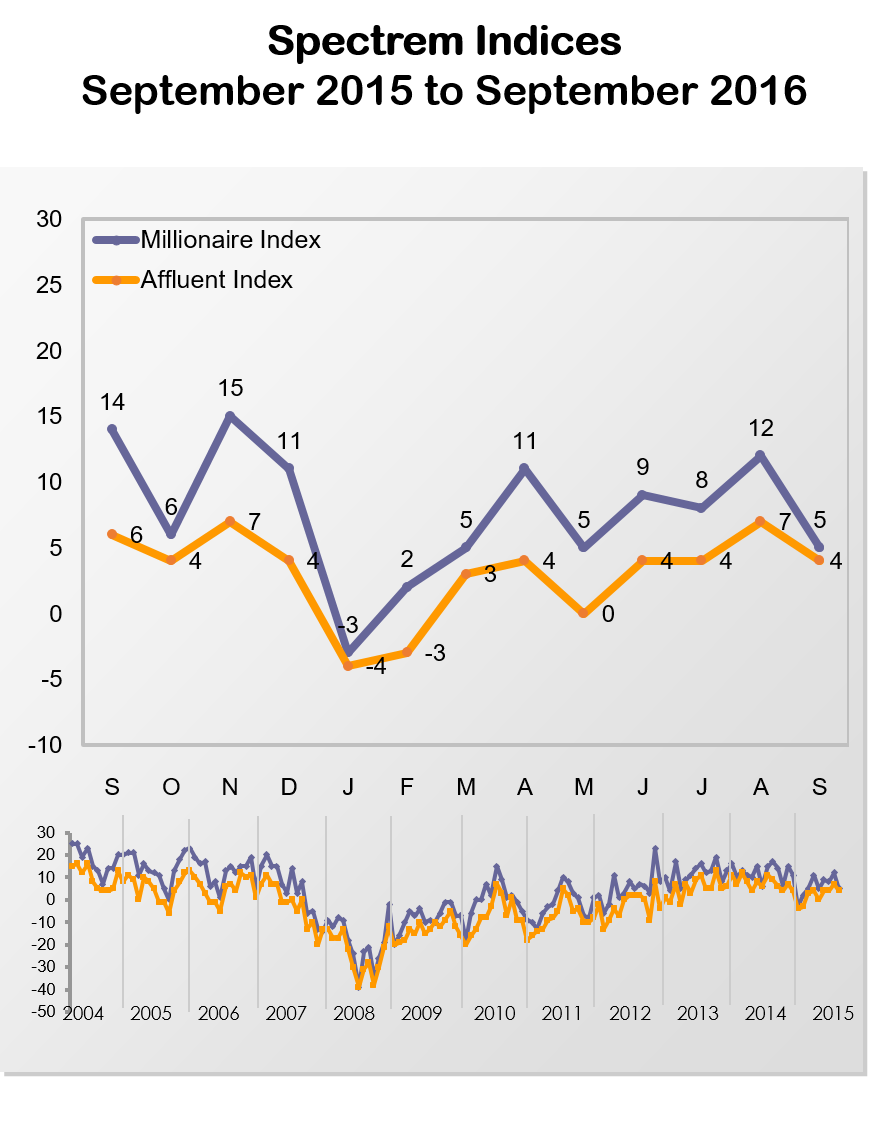 Since 2004, the monthly Spectrem Affluent Investor Confidence indices have tracked changes in investment sentiment among the 16.3MM households in America with more than $500,000 of investable assets (SAICI), and those with $1MM or more (SMICI). This month’s survey was fielded between Sept. 16-21.

The one point separating the SMICI and the SAICI is the smallest gap since January. While Millionaires generally have a more optimistic investment mindset than non-Millionaires, the narrowing of the gap indicates a growing level of wariness among more affluent investors.

There were several news stories in September that could contribute to this less optimistic mindset. A lackluster jobs report released at the beginning of the month found a gain of only 151,000 jobs (a gain of 180,000 jobs was expected). In addition, there was continued speculation about whether the Federal Reserve would raise interest rates at its September meeting. Pipe-bombings in New Jersey and New York and police shootings in Tulsa, Oklahoma and Charlotte, North Carolina, also may have contributed to affluent investors’ unease.

And then there is the presidential race, which is less than two months away. When asked in September by Spectrem Group what they consider to be the most serious threat to achieving their current household goals, the largest percentage of affluent investors responded, ‘The political climate.”

An analysis of the Spectrem affluent investor confidence indices by gender and political affiliation reveal telling confidence gaps. The SAICI for men is at 9 compared with -2 for women. For affluent investors who identify themselves as Independents, the SAICI is at 6. For Republicans and Democrats it is at 2.

The SMICI for men is at 7 and at 2 for women. As with the SAICI, it is highest for affluent investors who identify as Independents (12) compared with Republicans (6) and Democrats (-9).

The declines in the indices are reflected in how these investors indicate they will invest in the coming month. While the largest percentage (37 percent) said they intend to invest in Stock Mutual Funds in September, this represented a drop of 7 percent from the previous month. The next largest percentage (roughly 33 percent) said they would hold on the investment sidelines in the coming month. This is an increase of almost 11 percent from August.

Another driver of the Spectrem affluent investor confidence indices is the monthly Spectrem Affluent Household Outlook, a measure of four financial factors that impact their daily lives. The Spectrem Millionaire Household Outlook each declined in September to within 0.16 of a point of each other, the thinnest gap since March 2013, and another reflection of an increased unease of Millionaire investors.