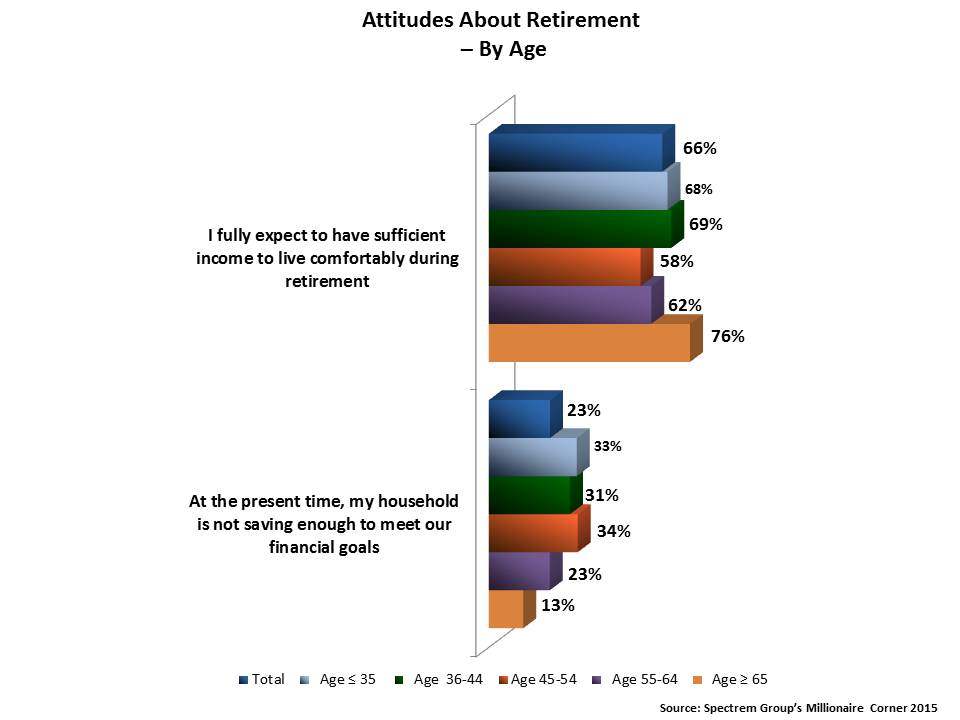 The mindset of aspiring millionaires is one of confidence and concern, according to a new Spectrem Group wealth level study of households with a net worth of at least $100,000 (not including primary residence). Roughly six-in-ten surveyed non-Millionaires report their financial situation is better today than it was a year ago and expect it to be strong a year from now. On the other hand, they are less secure than their wealthier counterparts in their retirement preparedness. Fifty-five percent express concerns about being able to retire when they want to, compared with 37 percent of Millionaire households.

And yet, just three-in-ten surveyed non-Millionaires indicate that getting adequate help and advice that would help them reach their financial goals is on their to-do list. It is more of a concern for the youngest surveyed respondents. Nearly four-in-ten (37 percent) of those 35 and under worry about having access to adequate financial help and advice to meet their goals.

Nearly all non-Millionaires surveyed (95 percent) consider themselves more than 10 years from retirement. Nine-in-ten Gen Xers are on the same track, they told Spectrem Group. Six in ten of both age demographics are concerned they won’t be able to retire when they want.

At present, the vast majority of non-Millionaires believe they are saving enough to meet their financial goals. Only 23 percent overall believe otherwise. But it is a heightened concern among Millennials (33 percent) as well as Gen Xers (31 percent) and respondents ages 45-54 (34 percent).

Similarly, only 21 percent of surveyed non-Millionaires expressed concern about their household’s current amount of debt, but of these, the highest percentage were Millennials (34 percent), followed by early Gen Xers and Baby Boomers ages 45-54 (31 percent).

To learn more about the Mass Affluent, click here