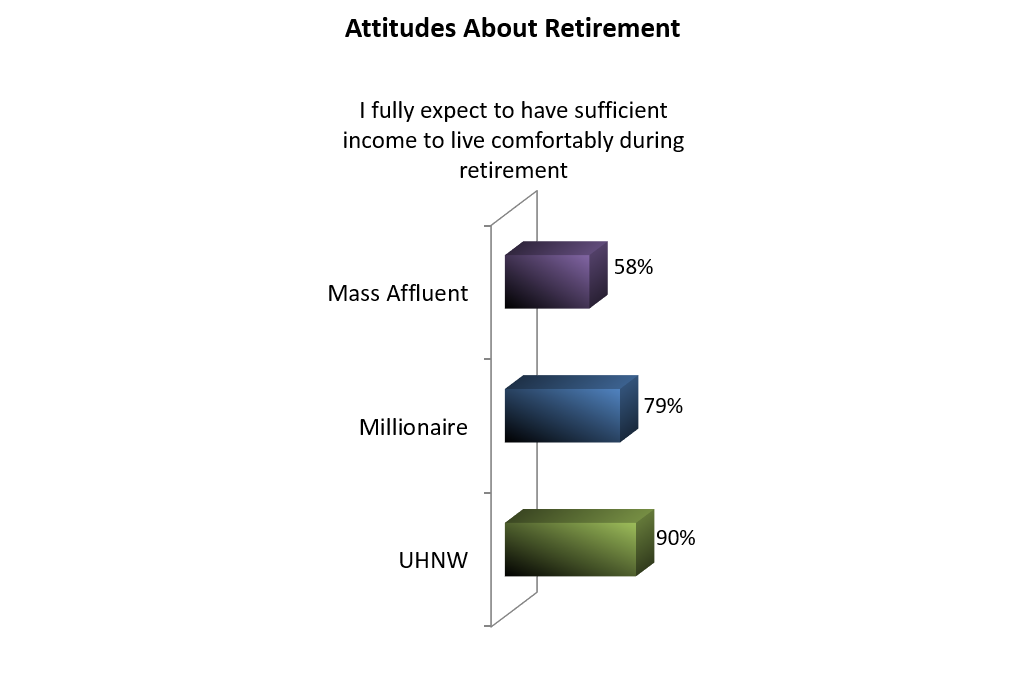 Mass Affluent investors are less likely than wealthier households to consult with a financial advisor, our new wealth segment research finds. Are they selling themselves short, particularly when it comes to saving for retirement?

And yet, Mass Affluent investors are less confident than their wealthier counterparts about having a secure financial future. Only percent fully expect to have sufficient income to live comfortably during retirement, compared with 79 percent of Millionaires and 90 percent of UHNW investors. Further, while it is not a high percentage, they are more concerned than their household is not saving enough to meet their financial goals (24 percent vs. 10 percent of Millionaires and 4 percent of the UHNW).

For a majority of Mass Affluent investors (56 percent), being able to retire when they want is a primary concern. It is less so for Millionaires (39 percent) and the UHNW (20 percent). They also indicate a heightened concern over getting adequate help and advice to allow them to reach their financial goals (34 percent vs. 25 percent of Millionaires and 17 percent of UHNW).

The largest percentage of Mass Affluent investors plans to retire in more than 10 years (42 percent), while three-in-ten look to stop working full-time in five-10 years. One-third anticipate that their household investable assets upon retirement will be $500,000 to $1 million, while just over one-fourth forecast they will have less than $500,000. Will that be enough?

Mass Affluent investors clearly want advice about saving for retirement. Why the disconnect between their retirement concerns and their comparative lack of outreach to a financial advisor? Their wary mindset toward advisors is reflected in their belief that a financial advisor would not be looking out for their best interests. The next most common reasons they give for not using an advisor are that they feel they do not have enough assets to warrant having one and that they cannot afford one. Not surprisingly, Mass Affluent Millennials are significantly more likely than their older counterparts to believe that they don’t have enough assets to warrant an advisor or that they cannot afford one.

This is an opportunity for the industry to educate and support Mass Affluent investors by making more educational and investment solutions available online, along with video-chat support. These investors are generally younger than their wealthier counterparts and are likely to conduct independent research on the Internet. Retirement plan providers, too, should continue to support their retirement planning information and strategies.