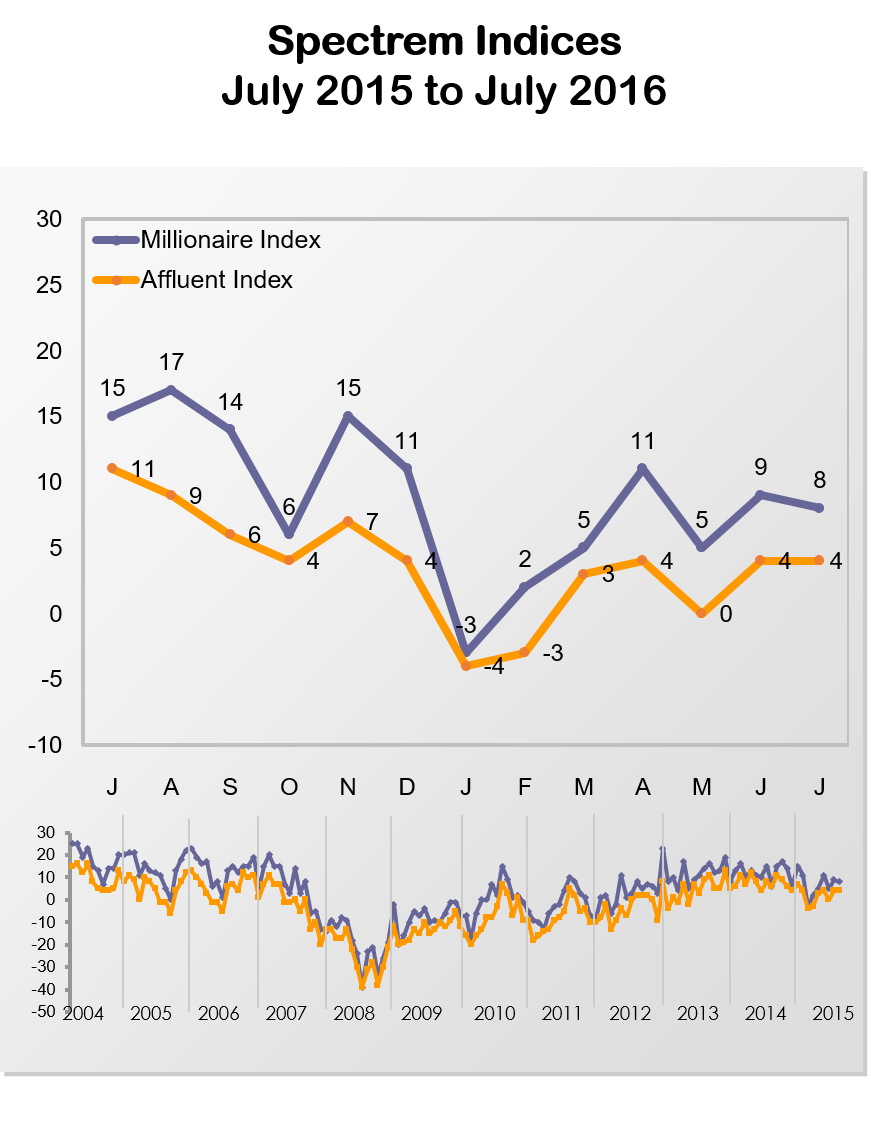 Since 2004, the monthly Spectrem Affluent Investor Confidence indices have tracked changes in investment sentiment among the 16.3MM households in America with more than $500,000 of investable assets (SAICI), and those with $1MM or more (SMICI). This month’s survey was fielded between July 19-25.

An analysis of the indices by gender and political affiliation find telling confidence gaps. The SAICI for men is at 7 compared with -1 for women. Despite consecutive increases over the past two months, the SAICI for women continues to be in negative territory for each month in 2016

The SMICI for men is at 11 and at 4 for women from the previous month and the second consecutive monthly gain.

By political affiliation, the SAICI for Affluent investors who identify as Democrats is at 8. For Republicans, it is at 4 and for Independents, it is at 0.

Last month’s indices were fielded just prior to the historic vote by the U.K. to exit the European Union. This initially roiled the markets but the sell-off was short-lived and so did not appreciably move the needle on this month’s SAICI and SMICI. The level indices were more a factor of continued overall investment wariness related to a myriad of factors ranging from ongoing speculation about when or if the Federal Reserve will further raise interest rates to concern about global markets . According to Affluent investors we interviewed in July, stock market conditions are the primary factor in affecting their current short-term investment plans.

“The rise in the Outlook indicates more optimism among Affluent investors about their long-term personal financial situations,” Spectrem President George H. Walper, Jr. observed. “And while the presidential campaign continues to dominate the news, Affluent investors are presently less concerned about that and more focused on economic issues that directly affect them.”

Top Takeaways for Advisors and Providers:

·         In the face of investor malaise, it is up to advisors to talk to clients about their investment concerns and share with them market trends that could give them a fact-based foundation on which to base investment decisions.

·         Establish a mutually agreed-upon period for review of your clients’ investment or financial plan to ensure they are on track.

·          Affluent investors indicate they are feeling confident about their long-term household outlook. Review issues such as household assets and income with them in relation to their financial plan.