Do Plan Participants Have an IRA? 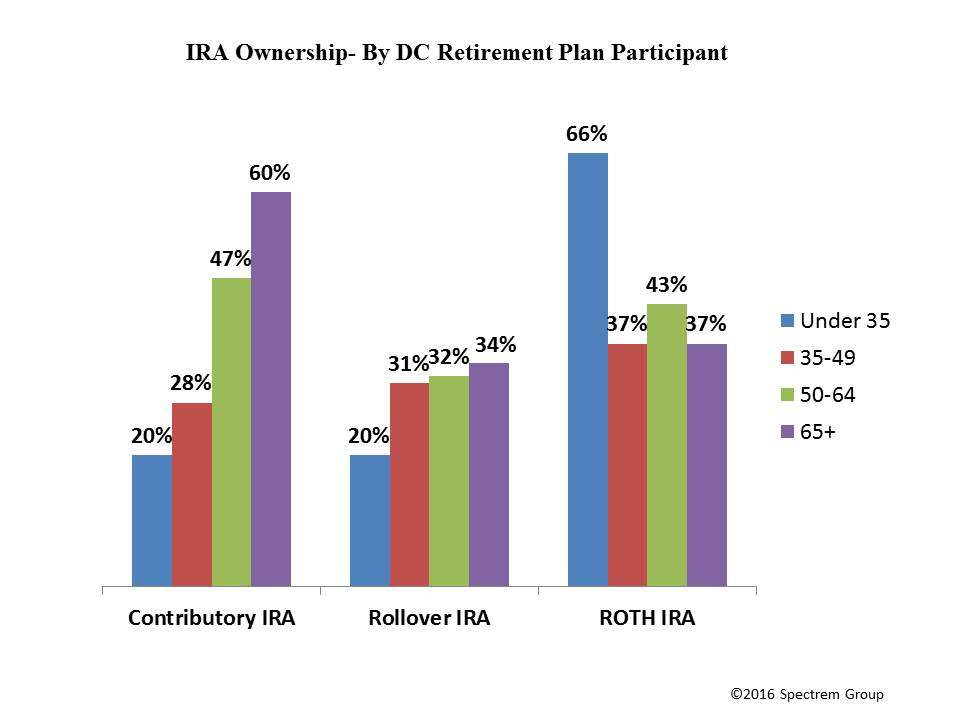 It is estimated that individuals may need up to 85 percent of their work income in retirement. In addition to an employer-sponsored Defined Contribution retirement plan, such as a 401(k), many plan participants also own Individual Retirement Accounts to supplement their retirement savings.

Almost half of Defined Contribution plan participants (46 percent) have a ROTH IRA, according to Spectrem Group retirement market research.  This is a larger percentage than those who report having a Contributory IRA (36 percent) or a Rollover IRA (30 percent).

Age, gender and plan balance are factors in who is most likely to own a ROTH IRA in addition to participating in a Defined Contribution plan. Millennial plan participants are seriously on board with a ROTH IRA in comparison to their older counterparts. Two-thirds of Millennials report owning a ROTH IRA, compared with 37 percent of Gen Xers, 43 percent of Baby Boomers and 37 percent of seniors aged 65 and older.

Contributory IRA ownership increases with the age of the retirement plan participant. Twenty percent of Millennials report having one, compared with 28 percent of Gen Xers, 47 percent of Baby Boomers and 60 percent of seniors.

Ownership of a Rollover IRA increases with age, from 20 percent of Millennials and roughly three-in-ten Gen Xers and Baby Boomers to 34 percent of seniors. This is, of course, a reflection of years in the workplace. Millennials are not as likely

as older plan participants to have changed jobs (or retired, for that matter) and so do not have those former retirement plan assets to transfer.

Spectrem Group research finds that by gender, female plan participants are more likely than their male counterparts to have a ROTH IRA (48 percent vs. 43 percent of men), while males are considerably more likely to own a Contributory IRA (41 percent vs. 33 percent) and a Rollover IRA (37 percent vs. 24 percent).

DC plan participants with the largest plan balance of at least $100,000 are found to be the most likely to own a ROTH IRA and a Contributory IRA. These investors are equally likely as those with a plan balance between $50,000 and $99,999 to own a Rollover IRA.

Takeaways for Plan Sponsors and Advisors:

· Roth IRA ownership is higher among younger people, which may be a reflection of their preference to not have to pay taxes when they ultimately withdraw the money.

· As expected, rollover IRAs are more popular after age 50 as people have moved DC plans into Rollover accounts when changing jobs or at semi-retirement.  It is important for companies to capture those rollover dollars and have plan participants keep the money with the same company used during the defined contribution years. In contrast however, advisors who may already have some of an investor’s IRA assets should push for consideration of all IRA assets.

· As age increases so does Contributory IRA usage and balances.  Emphasize that IRAs are a way to supplement DC plans as a preparation for retirement. While contribution amounts are limited for those who already participate in a DC plan, they still provide some additional benefits.

· Roth IRA balances are much lower for younger people, presenting an opportunity for IRA companies to increase balances in this area.