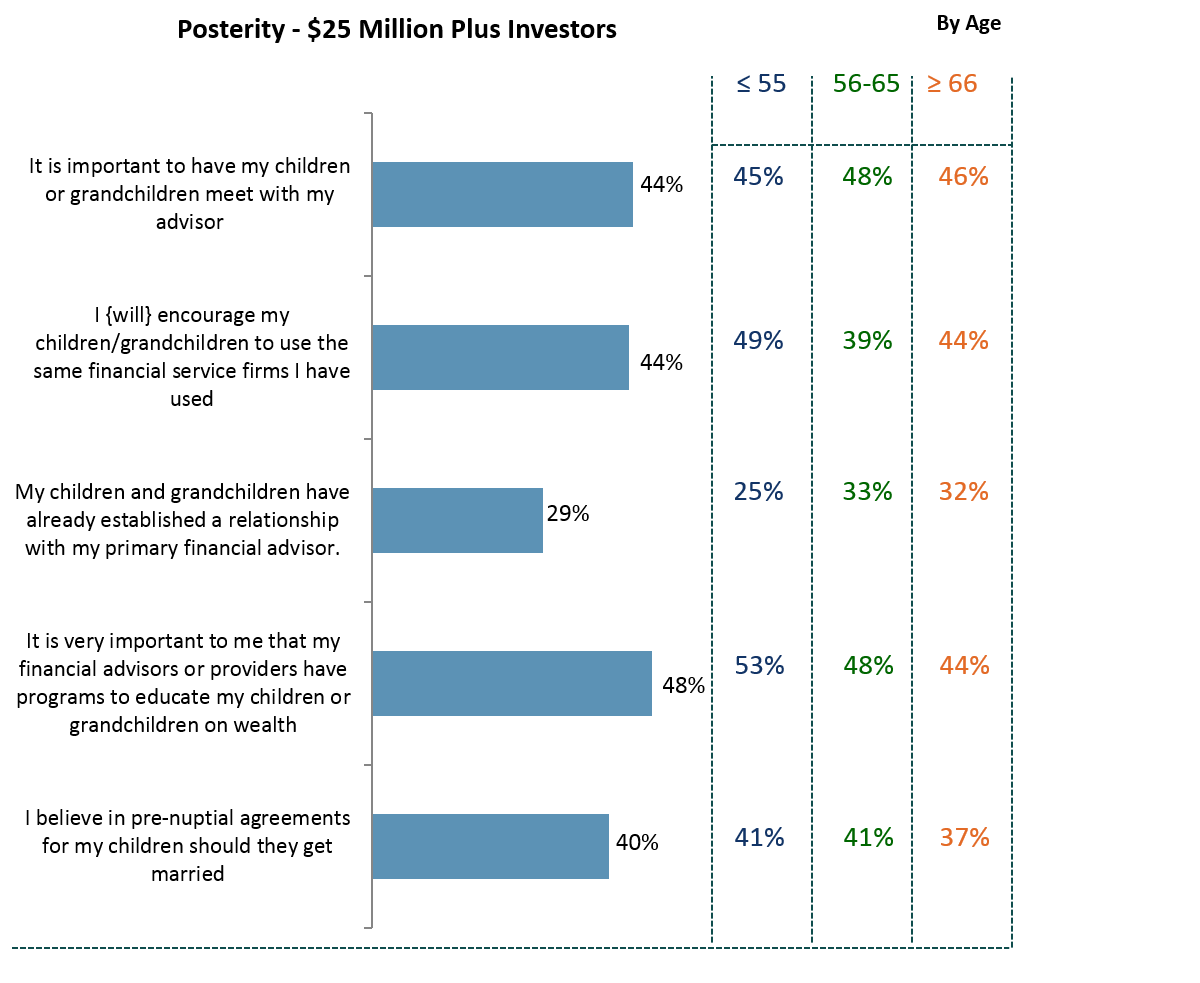 Establishing the manner in which a household’s personal wealth will be handled and then distributed requires thorough and ongoing discussions and intimate decisions about one’s family as it grows and changes through the years. Our new report, Choosing a Trustee, reveals through quantitative research and in-depth interviews with investors attitudes about whether these discussions should be all in the family.

Among investors with a net worth of at least $25 million (not including primary residence), roughly half (48 percent) feel it is very important that their financial advisor or provider have programs to educate their children or grandchildren about wealth. But only four-in-ten (44 percent) think it is important to have their children or grandchildren meet with their advisor. Age is not a significant factor in this attitude with younger and older investors equally sharing this opinion.

The same percentage indicates they would encourage their children or grandchildren to use their financial service firm. Across all age groups, the youngest investors (ages 55 and under) were most likely (49 percent) to say they would do so, compared with 44 percent of seniors ages 66 and up and 39 percent of Baby Boomers age 56-65.

But that, apparently, is in the future. Only about three-in-ten of $25 million plus respondents report that their children and grandchildren have already established a relationship with their primary financial advisor.

The general consensus seems to be that while children may have met their advisory firm or trustee, few had developed close relationships. A primary reason is that their children have thus far taken little to no interest in the trust or its management. “None of my children have ever had any interest in the stock market,” one investor told us. “When I talk to them about it, they look at the bottom line. And I say, ‘Do you ever talk to (the trust officer) or make any suggestions? Or do you have any feelings about it?” And they say, ‘I’m raising a family, too busy.’”

For other investors, getting the entire family involved is on the to-do list. “When there was a death in the family of friends,” another investor said, “it was suggested that the kids know where everything is and not lust life insurance, etc. So we went through that process with my oldest because he was out of college. The other two were not and now they do want to know, but we just haven’t done it yet.”

For one investor, medical issues upped the urgency factor. “I was diagnosed with prostate cancer, the investor revealed. “I was going in for the operation and I started thinking, ‘Holy cow, will I ever even come out of the operation?’ So I started a revert letter: If I die, number one, here’s where everything is in the office, here’s what I carry in my briefcase, here’s a key player, the accountant. And then I walk through (in layman terms): this is the first thing you have to consider, this is the second thing, here’s how my will works. You could read it and know what to do or could you hand it to your attorney and he’d know what to do.”