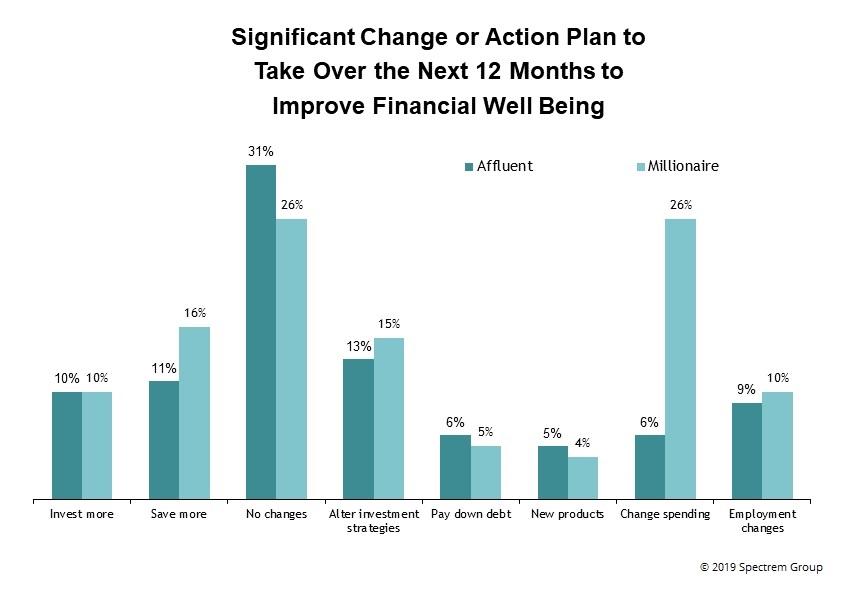 On Wednesday, May 15, the Dow Jones Industrial Average slipped by 150-200 points in early trading when the U.S. retail sales report came out, showing that Americans are cutting back on spending for clothes and appliances, among other items.

As part of the monthly examination of investor confidence and their outlook on the future of finance and investing, investors are asked one specific question, and in April the question was “what is the most significant change or action you plan to take over the next 12 months to improve your financial well-being?”

While 31 percent of all investors responded with "no change",  26 percent of Millionaires, which for the index is those with $1 million in investable assets, said they would change their spending habits. Apparently, that meant spending less.

There were other indications that Millionaires were planning on backing off on extending themselves financially. Sixteen percent answered the question by saying they would save more, and 5 percent said they planned to pay down debt more than in the past.

All of those responses are signs that investors are tightening their budgets and closing financial ranks in light of current economic concerns over global trade and the fear of a recession.

The Commerce Department reported on May 15 that U.S. retail sales dropped 0.2 percent in April after seeing a huge 1.7 percent increase in March. The report pointed to a 1.1 percent drop in car sales, a 1.3 percent drop in electronics and appliance store purchases, and a 1.9 percent drop at home and garden supply stores. Clothing sales also fell 0.2 percent, which is an odd showing in a month when the weather is changing and consumers are looking to buy clothing for the upcoming summer months.

The Spectrem Index question also produced a very high percentage (9 percent) of investors who said they planned employment changes in the coming year, which is another action that could produce a pullback in spending.