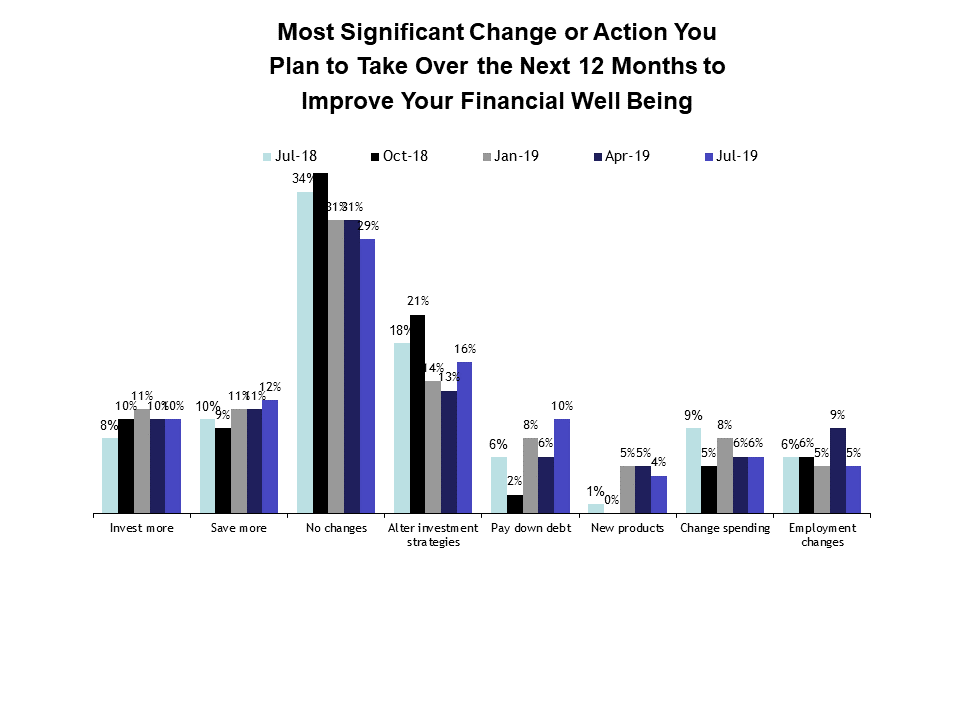 It takes something dramatic to get most affluent investors to change their investment patterns. Asking investors what significant change they have planned for the next 12 months regarding their finances is likely to produce a result that is neither positive nor negative.

That being said, Spectrem’s monthly research with affluent investors in July showed that they are leaning a bit more heavily toward making some sort of change as the markets climb and fear of a market correction or recession grows.

In Spectrem’s monthly confidence index survey, investors with at least $500,000 in investable assets are asked one key question about current events, and the questions rotate quarterly. For the survey conducted July 15-22, investors were asked “What is the most significant change or action you plan to take over the next 12 months to improve your financial well-being?”

As it has been historically, the most popular answer was “no change”. But in the July survey, only 29 percent of investors responded that way, a drop from the 36 percent who answered with that response back in October.

So, investors currently have more on their minds than just standing pat.

The response that saw the largest increase from the last time the question was asked in April was “pay down debt’’, which 10 percent of investors responded. But the second-most popular response was “alter investment strategies’’, which 16 percent of investors planned to do. That’s a 3 percent increase from April, indicating that more investors see reasons to reconsider their investment plans.

When the investors are segmented by wealth, the Millionaires with more than $1 million in investable assets were more likely to say “alter investment strategies’” (23 percent). Since “invest more” and “save more” are two other answer options, changing an investment strategy means a longer look at the goals of the investor.