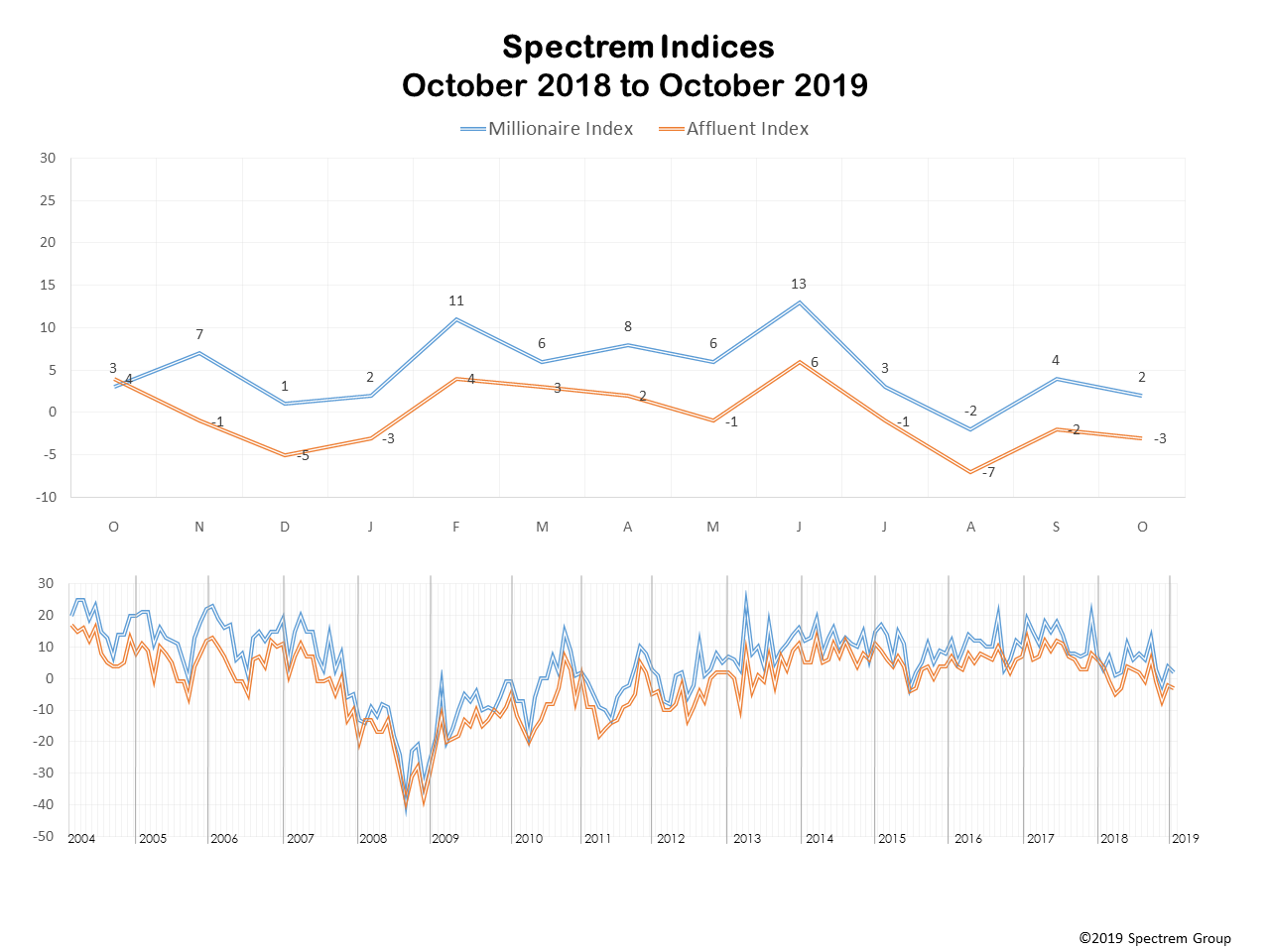 ·         The stock market indices remain near record highs, so something else is bothering investors. Both the domestic political atmosphere and geopolitical economic and governmental policies remain in flux, which could be the reason why investor confidence has waned slightly.

·         After taking a significant jump in September, the SMICI dropped 2 points in October to stand at 2, the second-lowest mark of 2019. Considering there were two months in 2019 in which the SMICI was in double digits, the current mark is unusually low, especially in light of the stock market numbers.

·         The SAICI also took a jump in September only to experience a slight drop in October, and remains in negative territory at -3. The SAICI has been in negative range for four consecutive months, which last occurred in 2012 and 2013, when the SAICI spent 10 months in the negative range.

·         Among all investors, investing intentions in stocks and stock mutual funds dropped slightly while investing in cash products rose by more than 5 percent.

·         As was also the case in September, those investors not investing further in the coming month actually dropped, an indication that investors want to take advantage of the high stock market results but are being cautious about where they are investing their funds.

The Spectrem Investor Confidence Indices survey was conducted from Oct. 18-21, 2019, during which the Dow Jones industrial Average flirted again with 27,000, the NASDAQ was above 8,000 and closing in on its own record high, and the S&P 500 was above 3,000. Those numbers indicate a positive and bullish run, and investors in October were not impressed. Instead, they perhaps were focusing on impeachment proceedings against President Donald Trump, who has had a positive impact on investing during his almost three years as president, and the fact that no settlement has been reached yet on the trade negotiations with China, or the final result of Brexit conversations in Europe.

The monthly SAICI tracks changes in investment sentiment among the 17 million households in America with more than $500,000 of investable assets. The SMICI reflects the investment sentiment of households with more than $1 million in investable assets. The SMICI numbers are usually higher than the SAICI numbers, and the Millionaire investors often are more positive than the non-Millionaires, but in October, all investors seemed to be cautious and a bit pessimistic.

Among non-Millionaires, there was a corresponding drop in stock and stock mutual fund investing, and a 5.5 percent increase in cash investing.

The percentages of investors not investing in the coming month fell among both segments, with a 4 percent decrease among Millionaires.

Spectrem’s Household Outlook, a measure of the long-term optimism among investors in four financial factors which impact a household’s daily life, rose among all investors from 14.50 to 18.10, and jumped five points among Millionaires. But the outlook for the economy remained in negative territory for both segments for the third consecutive month, which means investors are cautiously watching the impact of trade negotiations as well as the cautionary tale from the summer that a recession could be on the horizon.