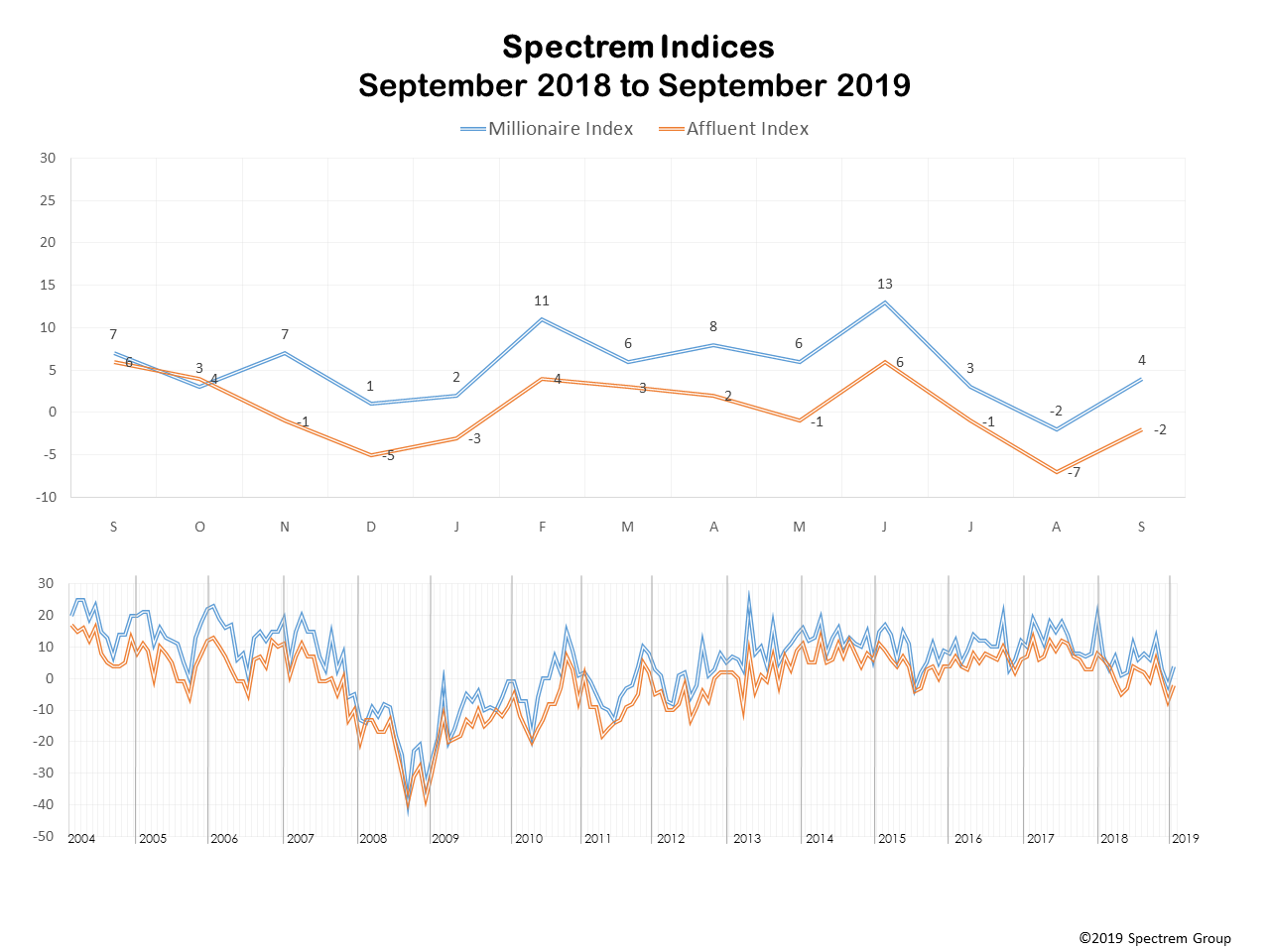 ·         Despite political turmoil in the United States, the stock market indices stayed near record highs through the last half of the month of September, and investors accepted those numbers as the reality of the economic situation.

·         Both Millionaires and non-Millionaires increased interest in expanding both individual stock and stock mutual fund investing, and there was a corresponding drop in cash investing.

·         The other predictive result from the September index is that those not investing, the investors who have no intention of adding to their allocations in the coming month, actually rose among both Millionaires and non-Millionaires, and among Millionaires it rose to 34.9 percent of investors, matching the previous high for 2019 from August.

·         The Spectrem Household Outlook among all investors rose from 8.00 to 14.50, but it still remains among the lowest rating for all of 2019. The Outlook rose among both Millionaires and non-Millionaires, but both the Outlook for Household Assets and Household Income among Millionaires fell from the previous month.

In August, recession fears were running rampant due to the inverted Treasury bond yield curve showing higher yields for short-term bonds than long-term bonds. Those recession fears subsided in September, and the stock market responded by approaching record numbers, especially in the S&P 500, in late September.

The Spectrem Investor Confidence Indices survey was fielded from September 17-September 23, during which discussion of impeachment proceedings against President Donald Trump ratcheted up following a report that the President suggested to the President of Ukraine that his government investigate investment matters involving Hunter Biden, the son of Democratic presidential candidate Joe Biden. While the stock market reacted occasionally to news from the political arena, the stock market remained positive through most of the period.

The individual components of the Spectrem Confidence Indices show that both Millionaires and non-Millionaires had renewed interest in investing in equities, although levels remained well below the high interest shown in May and June. Cash investing, which had been used as a precautionary investment strategy over the last couple of months during the recession conversation, saw a severe reduction in September as well. Spectrem research has shown that more affluent investors are investing in cash products to protect against market volatility, but September results showed a move away from the protective action.

However, there was an increase among both wealth segments of those investors not investing, with 48.8 percent of non-Millionaires and 34.9 percent of Millionaires withholding any increased investing in the coming month.

Spectrem’s Household Outlook, a measure of the long-term optimism among investors in four financial factors which impact a household’s daily life, rose among all investors from 8.00 to 14.50 after recording a drop of almost 17 points in the previous month. The Outlook among non-Millionaires rose more than eight points. Still, both numbers remain well below ratings from most of the 2019 calendar year.