Investors Back Off As Market Rises 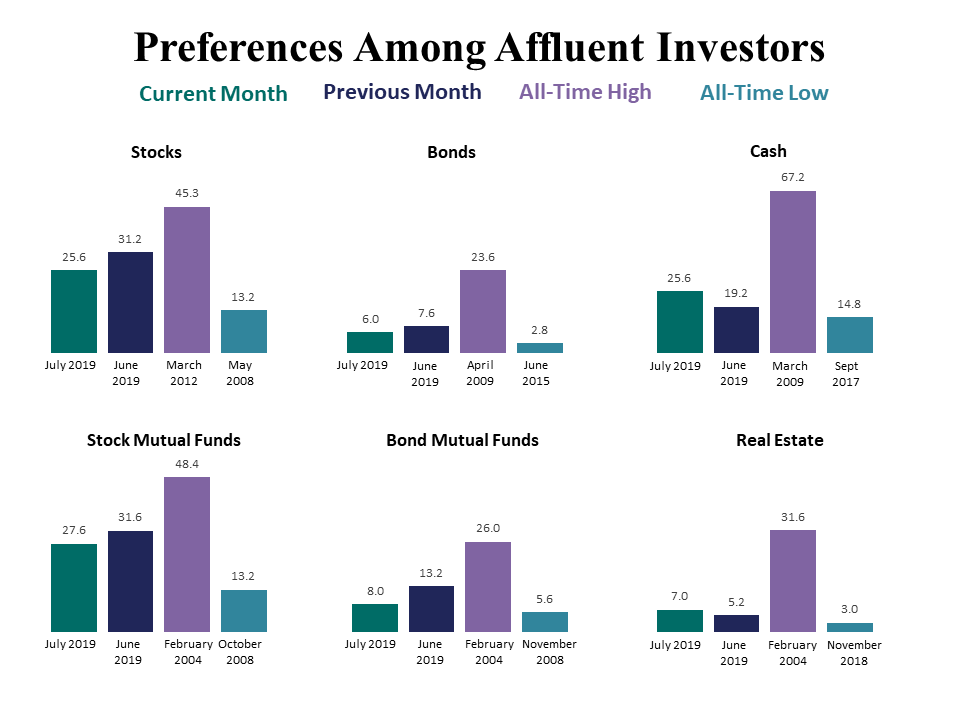 The stock market cannot rise forever, can it?

That’s perhaps the thinking of affluent investors who indicated intentions to back off of investing in the near future, according to Spectrem’s Investor Confidence Indices for July 2019.

Despite record highs for the three major stock market reporting indices, there was a drop in investing interest in key components which make up the Spectrem indices. The only product to see an increase among all investors in July was in cash.

Non-Millionaires expressed an increased interest in cash investing, from 16.3 percent to 19.7 percent, and, notably, decreased the percentage of those investors not investing in the coming month, from 48.8 percent to 47.5 percent. Real estate investing among non-Millionaires rose to a four-month high at 5.7 percent.

Bond mutual fund investing fell among both men and women in July, and the interest among women fell off the table, down to 4.1 percent from 12.4 percent in June.

However, while males not investing in July fell from 34.5 percent to 33.6 percent, it increased among females to 52 percent from 49.5 percent. That marks only the second month in 2019 when more than half of female investors said they would not be adding to their allocations in the coming month.

Republican investors proved to be the ones backing off in July. They dropped interest in stock investing by half from June, going from 37.10 percent to 19.80 percent. They reported decreased interest in all other products in the survey with the exception of cash, which doubled from 13.40 to 28.40 in July. Republicans reported zero interest in investing in individual bonds in July, down from 6.19 percent in June and 17.65 percent in May.

Democrats, meanwhile, showed a slight increase in stock and individual bond investing, while dropping their interest in stock mutual funds from 33.33 percent to 27.06 percent.

Both Republicans and Democrats had an increase in investors not investing in July, and the increase was more than 6 percent among Democrats.

With a report that the Federal Reserve was considering an interest rate cut in late July, retired investors may have decided to increase their investments to take advantage of the higher rates as long as they last. Retired investors increased their interest in stock mutual funds, individual bonds and cash investing, and for the second consecutive month they dropped the percentage of those not investing, down to 50 percent.