Investors Answer the Question: "Are You Wealthy?" 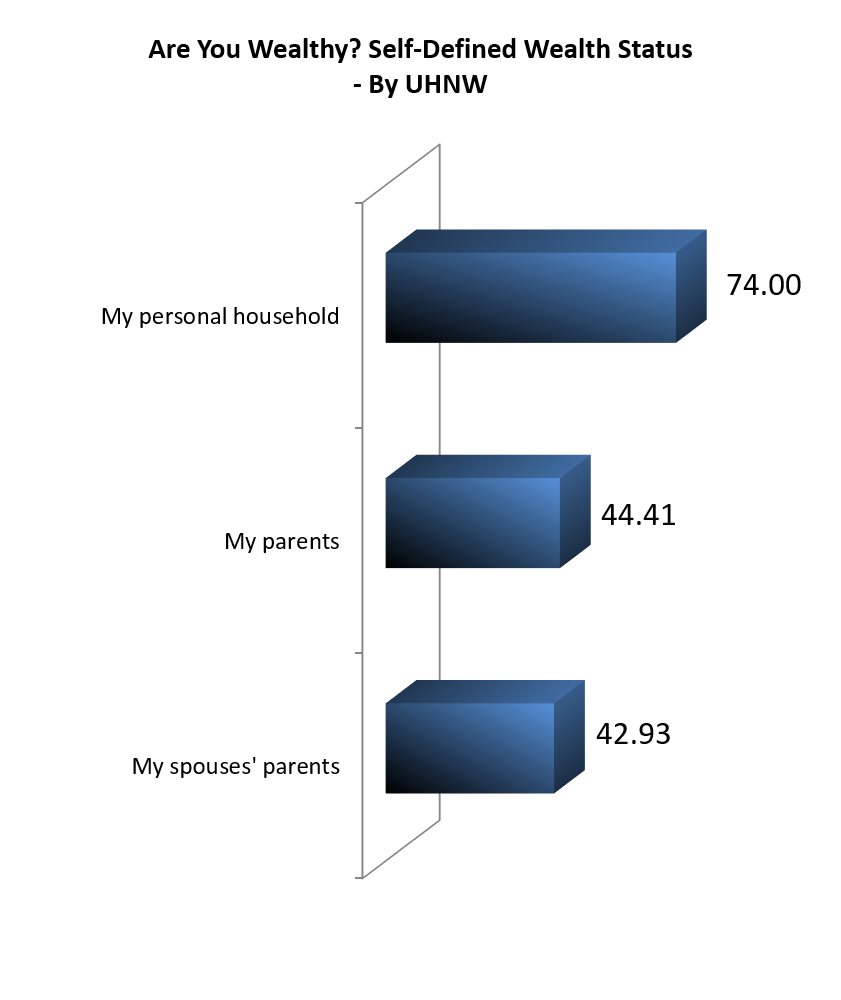 It’s a question asked of affluent investors in our quarterly wealth segmentation series study Financial Behaviors and the Investor’s Mindset. In some ways, the responses were sensible, but in some ways they were surprising.

“It’s not as simple a question as you might think,”’ said Spectrem president George H. Walper Jr. “From a financial standpoint, investors determine their wealth level based on income, assets, investments and anticipated future income. The results of the study show that even investors who are multi-millionaires question their own wealth status.”

Let’s start with the people who clearly are wealthier than most others, the Ultra High Net Worth investors with a net worth between $5 million and $25 million. While asking those investors whether they are wealthy would seem to come with an obvious answer, it is not as clear-cut as it might seem.

Asked to place their wealth status on a scale from 0-to-100, the UHNW investors placed themselves on average at 74.00. That segment was segmented further, and the investors with a net worth between $15 million and $25 million rated themselves at 81.65.

What’s even more interesting about the report on the wealth status of parents is that the younger UHNW investors have a higher opinion of their parents’ financial situation than older investors. While the Millennial and Gen X investors under the age of 52 placed themselves at 72.86 on the 0-to-100 scale, they placed their parents at 54.61 and their spouse’s parents at 53.11, both well above the average.

As expected, Millionaire investors with a net worth between $1 million and $5 million saw themselves well below the UHNW investors on the wealth scale, averaging out at 64.43, still well above an average score of 50. Again, those investors saw their parents and spouse’s parents as well below them on the wealth status scale, 44.13 and 40.58. (Investors almost always rate their spouse’s parents as less well-off than their own.)

There was very little range of answers among Millionaires based on age, although again the younger Millionaires rated their parents and spouse’s parents much higher than the older investors.

Among Mass Affluent investors with a net worth between $100,000 and $1 million, the rating of wealth was at 54.68, with their own parents at 47.69 and their spouse’s parents at 41.05. In this segment, the older investors, those from the World War II generation, rated themselves the highest at 59.65 and also had their parents’ ratings at the lowest, at 40.76 for their own parents and 38.40 for their spouse’s parents.

The fact that investors with a net worth in the millions might have a doubt about their wealth status indicates advisors must act accordingly, and must determine just how satisfied and secure an investor is in their own current financial situation.