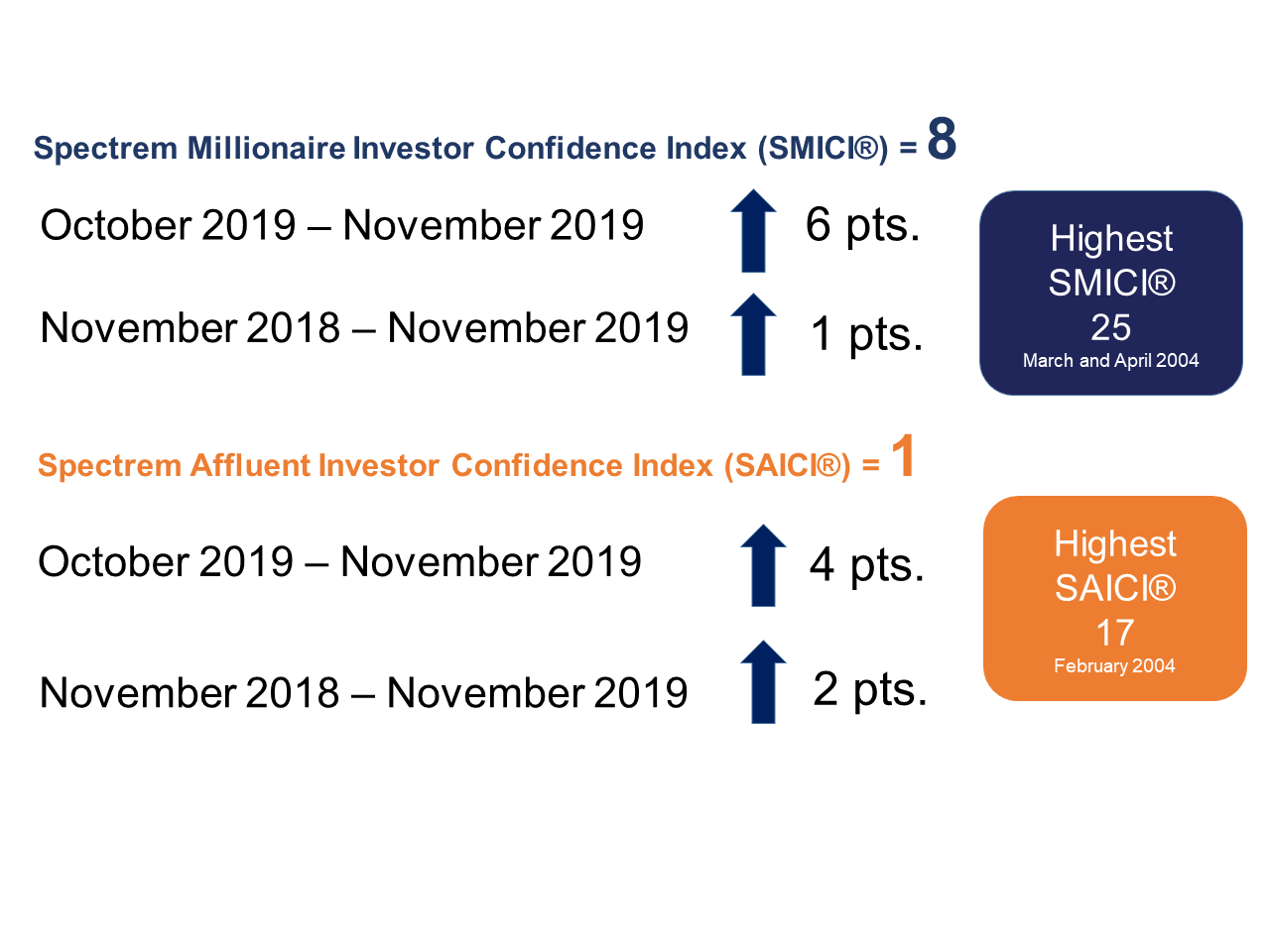 ·         November was one of the best months ever for the major stock market indices, and investors took note. Despite expanded impeachment proceedings against the President and no clear-cut advance on trade talk with China, wealthy investors chose to jump back into stock investing and declared renewed confidence in investing prospects.

·         With a 6-point increase, the SMICI moved up to 8, its highest point since June, when it stood at 13. The SMICI is up 10 points from August when it was in negative territory. The SAICI also improved in November, moving up 4 points and into positive territory for the first time since June. Like with the SMICI, the SAICI is up 8 points since the low point of -7 in August when trade talk and geopolitical issues forced the investor confidence to drop.

·         Non-Millionaires did not share in the improved confidence at all. Besides a drop in individual stock market investing, non-Millionaires also reported a decreased interest in stock mutual fund investing, instead showing an increased interest in bond and bond mutual fund investments. More than half of Non-Millionaires (50.8 percent) also said they will not increase their investment allotments overall in the coming month, and that is the highest level of non-involvement since May of 2019.

·         The Spectrem Household Outlook among all investors rose for the third consecutive month to 22.30, reaching the highest mark since July. The Outlook improved among both Millionaires and non-Millionaires, and among non-Millionaires the improvement was more than 5 points to 19.06.

On almost every business day in the month of November, at least one of the three major stock market indices reported a new record closing high. Stock market observers were revising their predictions for end-of-the-year numbers, and talk of recession disappeared from the conversation.

The Spectrem Investor Confidence Indices survey was conducted from Nov. 20-25, 2019, when investors were reading and hearing nothing but good news from the Dow Jones Industrial Average, the S&P 500 and the NASDAQ. The DJIA, for example, topped 28,000 during that period. Investors chose to absorb that information and ignore the continued battle over impeachment proceedings for President Donald Trump and the endless back-and-forth with China over whether any kind of trade deal is going to be finalized any time soon.

The SMICI reached 8 and the SAICI moved into positive territory for the first time in five months to stand at 1. The last time those indices were this high was in June, when trade talks with China appeared to be heading to a settlement that has not taken place yet.

Spectrem’s Household Outlook, a measure of the long-term optimism among investors in four financial factors which impact a household’s daily life, rose among all investors for the third consecutive month, going from 8.00 in August to 22.30 in November. Among the four components, the biggest improvement was in the Outlook over the economy, which rose into positive territory for the first time in four months at 1.60. Oddly, the Outlook for the economy was higher among non-Millionaires at 4.10 than among Millionaires, who rated it at -0.78, the fourth consecutive month Millionaires have given the economy a negative rating overall.