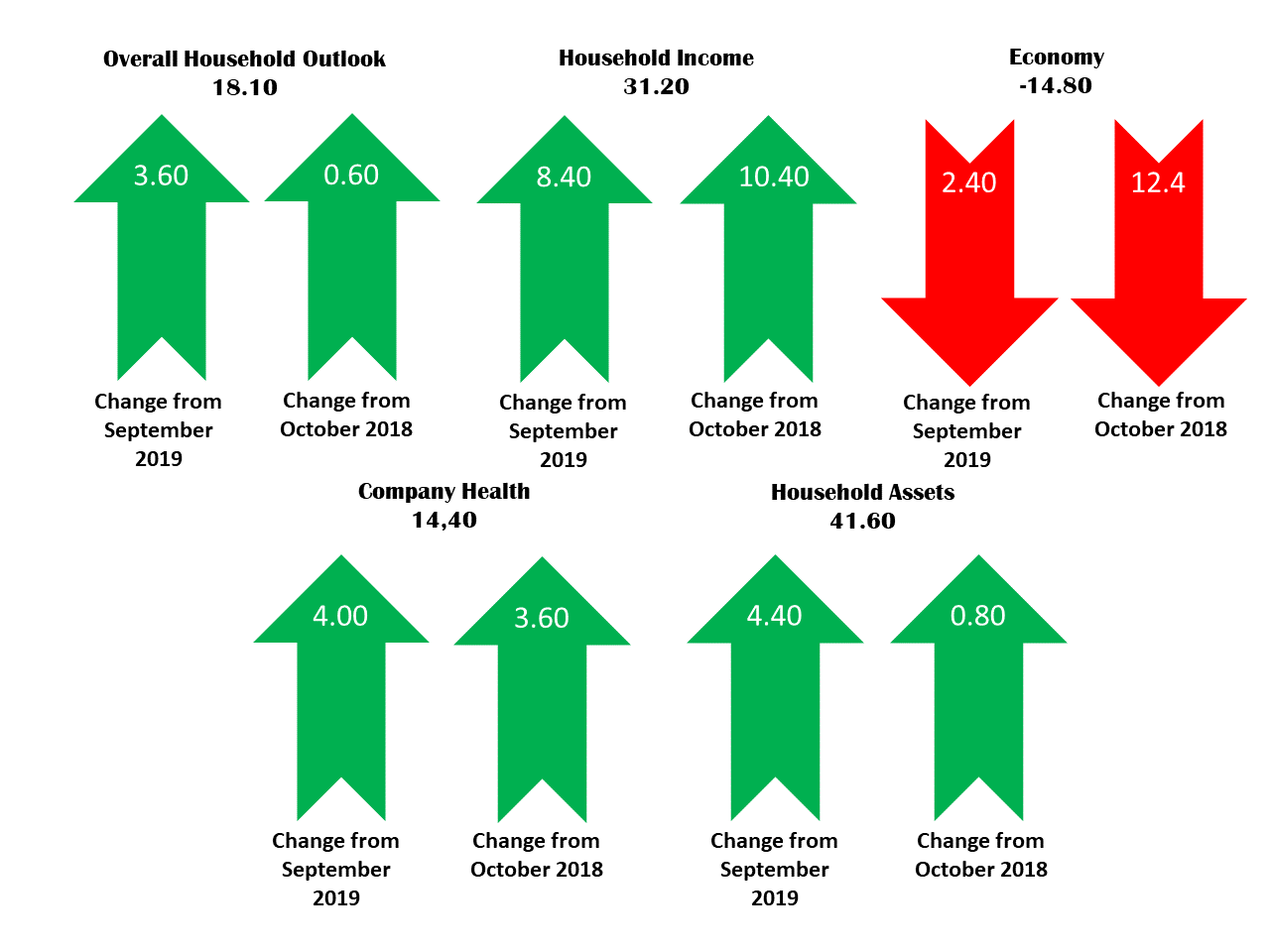 There are four components to the monthly Spectrem Household Outlook, and three of them rose for a second consecutive month in October.

But investors cannot shake their uncertainty regarding the economy, and indicate such in their responses for the Spectrem survey.

The summer speculation regarding a possible recession, amid very high stock market numbers, confused investors and remains on their minds as they judge how they feel about the economy going forward. Otherwise, their outlook regarding their household finances seems to be improving.

The Spectrem Household Outlook for October climbed among all investors from 14.50 to 18.10, marking a second month of improvement. Note, however, that the Outlook for investors stood above 20 for six consecutive months earlier in 2019, so the Outlook remains low.

The Spectrem Investor Confidence Indices survey was conducted from October 18-21, 2019, during which the three major stock market indices remained unusually high and the S&P 500 neared a record close on one of those days. At the same time, more witnesses offered their take on the controversy surrounding President Donald Trump’s conversation with the newly elected president of Ukraine, the negotiations over trade with China seemed at a standstill, and Brexit was on hold following a tumultuous political environment in Great Britain. The international events may not have as much of an impact upon household finances as the domestic matters.

It seems that only certain outcomes for economic conditions, like a settled negotiation with China or Brexit, or a dramatic decrease in the benchmark interest rate, would cause the Outlook for the economy to pull back into positive territory.

A second month of improvement in this factor still does not get it back to where it was from February through July, when it was in the mid-to-high 40s or above 50. The assets category, too, would be positively impacted by a decrease in interest rates.

The categories of investors reporting the highest increase in their Outlook for Household Assets were Republicans again, females and retired investors.

In the past two months, the Outlook for household income has more than doubled, from 15.20 in August to the October rating of 31.20. It now sits at the highest mark recorded in the Spectrem Household Outlook since December of 2007, just before the Great Recession.

The company health Outlook has registered between 6 and 17 for the past year, and there is probably some response to reports of tariffs and negotiations with China, concerns over some resolution in Europe with the Brexit negotiations, a concreate relationship with Mexico, and speculation surrounding the impeachment hearings of President Donald Trump.

But corporate earnings reported in mid-October were mostly positive, buoying the stock market throughout the month. While farmers remain uncertain of their situation due to the Chinese conversations, corporate America seems to be thriving.

Based on segmentation, the highest improvement in company health Outlook was reported among non-Millionaires and females.