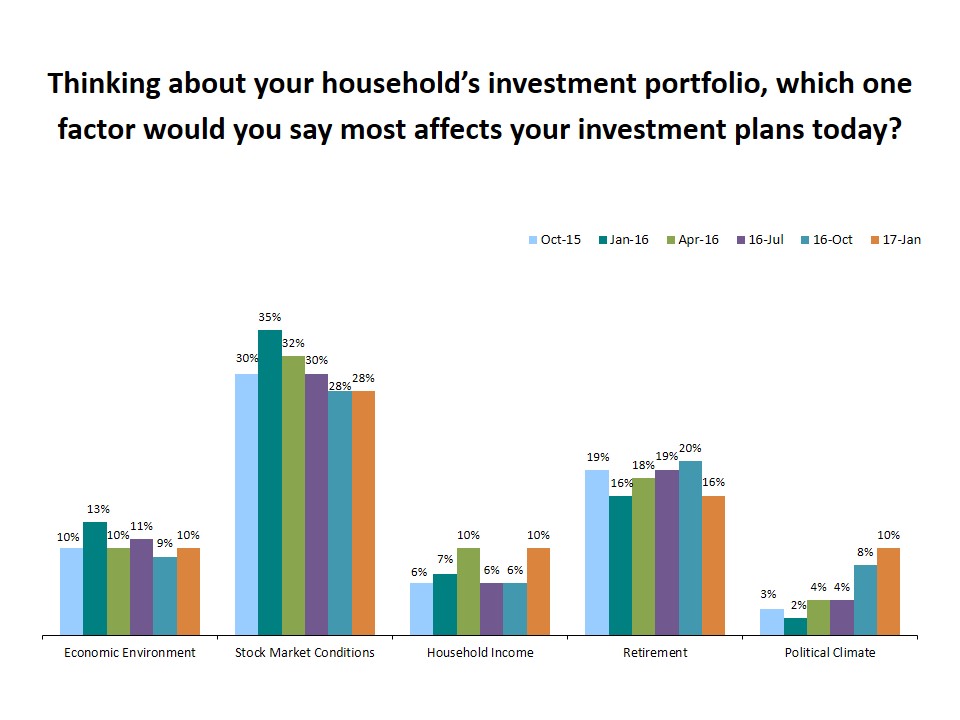 Along with the inauguration of Donald Trump, Wall Street is the big story in January 2017. As the Spectrem Affluent Investor Confidence Index was being fielded, the Dow Jones industrial average flirted with reaching 20,000 for the first time (It would surpass that benchmark on Jan. 25. The S&P 500 and Nasdaq also reached new highs).  Since the November election, the Dow has surged 1,667 points.

What a difference a year makes. In January 2016, U.S. stocks had suffered the worst 10-day start to a calendar year ever.  At the time, there were concerns over a slowdown in China’s economy, falling oil prices, an alleged nuclear test in North Korea and escalating Middle East tensions.

So it’s not surprising that when asked in January 2017 about the primary factor most affecting their current investment plans, the largest percentage of Affluent investors cited stock market conditions. Twenty-eight percent shared this response, unchanged from October 2016 when this question was last asked. Back in January 2016, when the markets were roiled by volatility, 35 percent of Affluent investors gave this response.

The decline indicates shifts of concern from see-sawing markets last year to markets reaching unprecedented highs. Affluent investors are speculating how long this rally will last, and whether to get in while it’s high.

Among other factors most affecting their current investment plans, Affluent investors were next most likely to cite retirement. Sixteen percent gave this response in January, down from 20 percent in October.  Ten percent of Affluent investors said that the economic environment is the factor most affecting their current investment plans. This is basically unchanged from last October when 9 percent gave a similar response.

Ten percent of Affluent investors also said that household income is the factor most affecting their current investment plans. This is up from 6 percent in October.