The Investable Assets of Wealthy Millennials 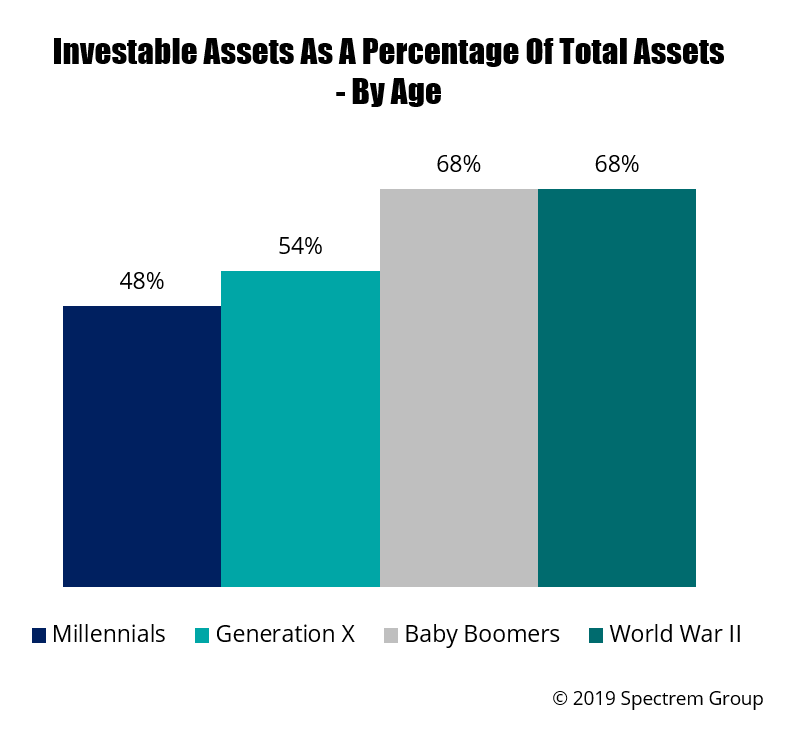 Until the next generation begins to wield influence on national economic matters, the generation known as Millennials are going to be blamed for all of the problems that exist in America.

It is perhaps the way of the world. Baby Boomers certainly took the brunt of criticism once that generation was identified in the 1960. But here is some news of which older generations may not be aware: Millennials now have their own money. Some Millennials have lots of money.

It’s taken a long time, but the financial advisory industry has finally caught on to this fact, and are now dividing their attention between the wealth transfer decisions of Baby Boomers and the portfolio decisions of Millennials.

Millennials invest their funds differently than do older investors. There are always differences in investment strategy based on age, because younger investors have different goals for their investable assets than the generations previous, but the differences seem a bit unusual this time around.

Keep in mind that investors who identify as Millennials were born as early as 1980, meaning the oldest are currently at least 38 years old. That demographic runs to those born in 1994 (as a generally accepted generational identification), so even the youngest Millennials are approaching or have reached the age of 25.

The difference comes from a higher percentage of Millennial total assets tied up in privately held business and investment real estate. On average, Millennials have 10 percent of their total assets tied up in investment real estate, which is a higher percentage than that of older investors and may be a signal of a generational turn of asset allocation.

Keeping in mind their lower percentage of investable assets and the likelihood that their total amount of funds in investable assets is lower, Millennials have a much lower level of investment in individual retirement accounts, and a notable lower percentage of funds in managed accounts. They are much more likely (96 percent) to have funds in an employer-sponsored defined contribution plan.

However, a much higher percentage of Millennials have managed accounts (65 percent, compared to Baby Boomers and World War II investors who are at under 60 percent), and they are much more likely to have funds invested in robo-advisor accounts (39 percent of all Millennials).

According to Asset Allocations, Portfolios and Perceptions of Providers, Millennials rate themselves as more aggressive than older investors on average, but that aggressiveness may show itself with a higher percentage of investable assets assigned to alternative products. Millennials are much more likely to be invested in products like hedge funds, private equity, futures and commodities.

The likelihood is high that either 9/11 or the Great Recession impacts decisions of Millennial investors. It is an advisor’s task to determine how those events color an investor’s decisions, and if appropriate, alter their thinking about the current impact of those past events.

Research shows that the younger the investor, the less likely they are to have taken a financial literacy course in elementary or secondary education. Young investors may believe they know what they need to know to make proper investment decisions, and it would be improper to argue otherwise, but an advisor can add key information that could prompt them to alter their investments in a way that benefits investors from their age group.