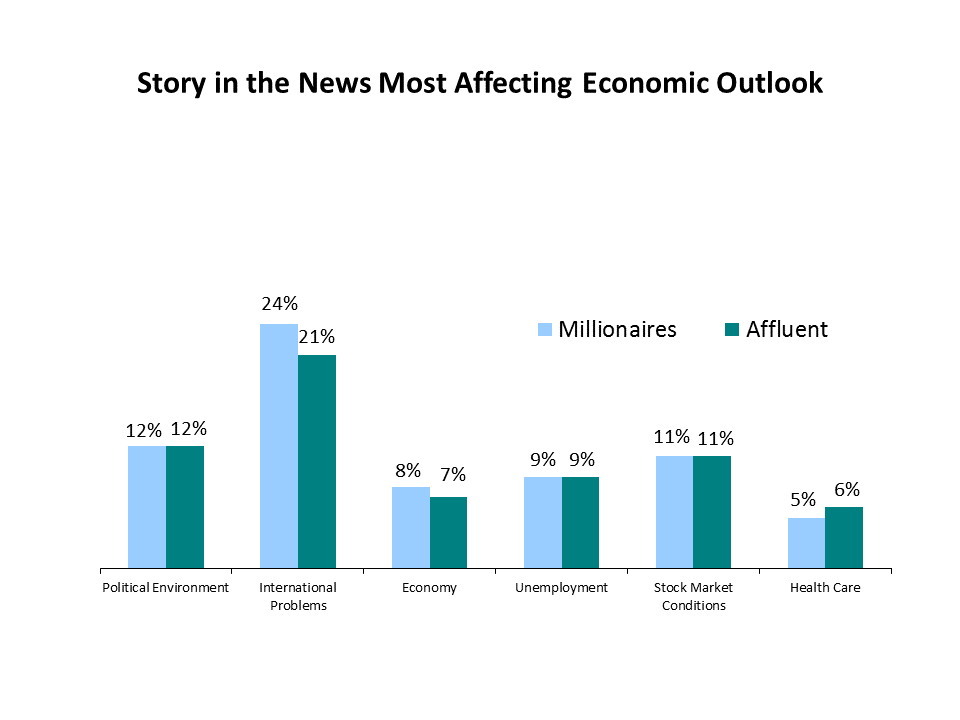 Not since August 2014 has international news so galvanized Affluent investors, according to a Spectrem Group survey conducted this month. The highest percentage of affluent investors surveyed (21 percent) cited “international news” as the stories in the media most affecting their economic outlook. This is up from 10 percent from November, when this question was last asked.

Last August saw Russian aggression against Ukraine, the kidnapping and murder of three Israeli teenagers and subsequent attacks and counterattacks by Hamas and Israel shattering cease fire agreements and deeper incursions into Iraq by the terror group ISIS, which was just making its presence known.

Prior to August, the previous time international problems had close to this kind of impact on Affluent investors’ economic outlook was in May 2012, when violence escalated between government and rebel forces in Syria.

This month as the Spectrem Group survey was fielded, ISIS’s reign of terror continued in the face of military strikes against them by the United States as well as Jordan following the release of a video of a Jordanian hostage being burned alive. On another front, Russia denied in the face of evidence that its soldiers were fighting in Ukraine.

February was a rare instance in which news stories about international developments superseded news about the U.S. political environment and stock market conditions as having the biggest impact on Affluent investors’ economic outlook. Both of these were no less volatile in February. Earlier this month, stocks battled back after a two-day losing streak to jump back into the black for the year thus far. And in Washington, D.C., lawmakers remained at odds with the White House over a host of issues, including the threat of a homeland security shutdown tied to the president’s executive order that would grant protection from immediate deportation to more than four million illegal immigrants. As this issue went to press, a federal judge in Texas blocked implementation of the order.