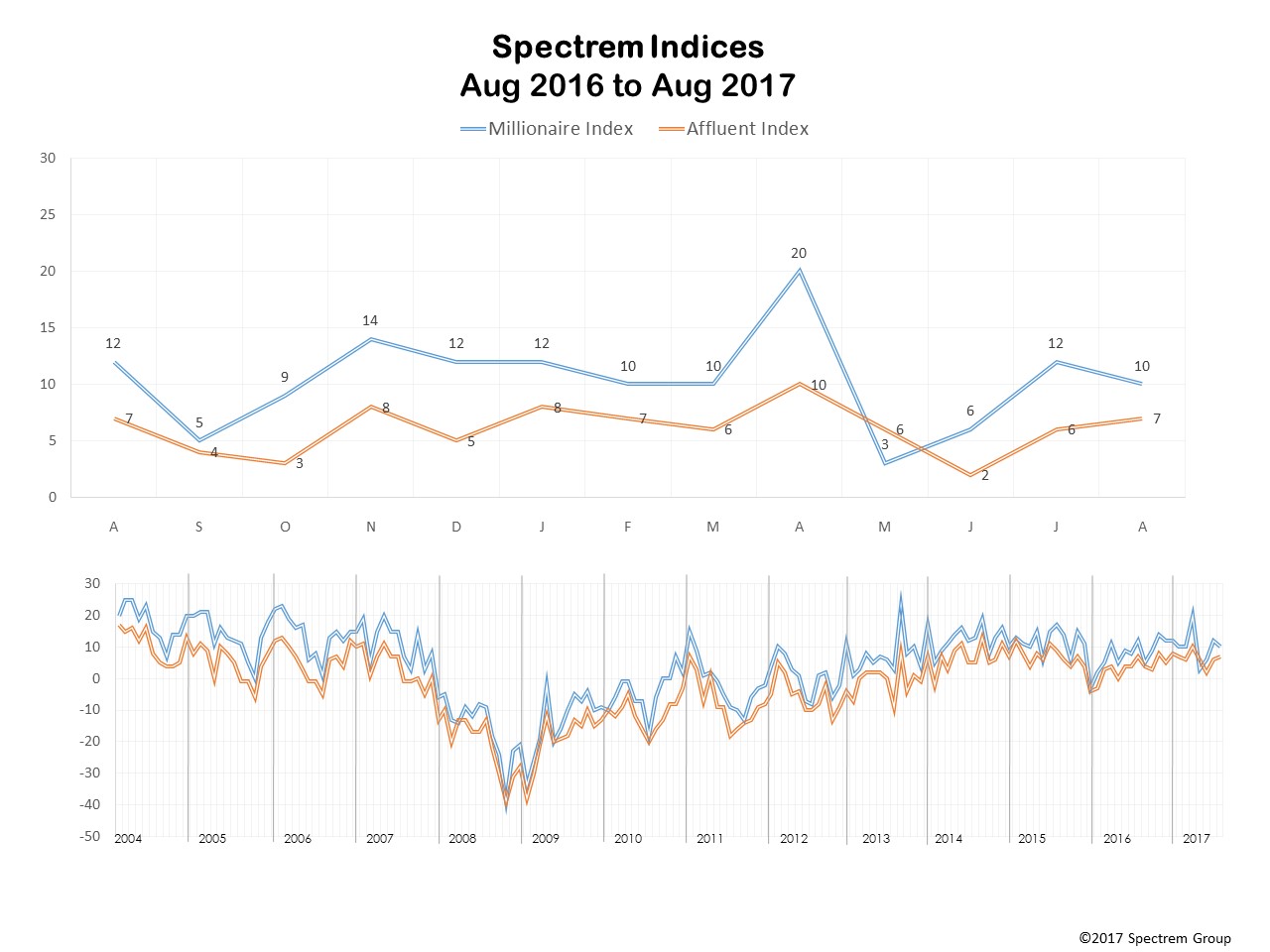 Who knows what to make of the state of economic affairs in the United States these days?

In a month when the U.S. and North Korea got into a war of words, a violent race-related protest took a life in Charlottesville, Va., and President Donald Trump promised to shut down the government to get his border wall with Mexico built, investors are taking a wait-and-see approach to their investing strategies as the month of August came to an end.

While the Spectrem Affluent Investor Confidence Index (SAICI) saw the smallest of increases month-to-month, the Spectrem Millionaire Investor Confidence Index (SMICI) saw its first drop in three months. The SMICI fell to 10 while the SAICI rose to 7, an indication there is little difference between the confidence of Millionaires over the confidence of investors overall.

The monthly Spectrem Affluent Investor Confidence index tracks changes in investment sentiment among the 17 million households in America with more than $500,000 of investable assets. The Spectrem Millionaire Investors Confidence Index (SMICI) reflects the investment sentiment of households with more than $1 million in investable assets. The July fielding was conducted from July 18-July 25, 2017.

Reflecting the uncertain nature of affairs over the month’s time, the components used to determine the Spectrem indices saw only small changes, some with gains and some with losses. The largest gain among all investors was in stock mutual fund investing, up to 38 percent, the highest in four months. The largest drop was in real estate investing, down to 4.8 percent, the lowest rate in eight months.

The Spectrem Household Outlook, a monthly measure of the long-term confidence in four financial factors that impact a household’s daily life, was steady from July to August at 25.00. However, in an unusual circumstance, the Outlook among non-Millionaires was higher than that of Millionaires, 27.24 to 22.83. The last time that occurred was in October of 2016.

The Non-Millionaire Outlook was the highest it has been since February of 2015.

Among the four components creating the overall Outlook, there were gains in Household Assets and Company Health and declines in Household Income and the Economy. Most of the gains, however, came from non-Millionaire outlook; Millionaires dropped in outlook in all categories but Company Health.

Asked to state the news most affecting their economic outlook, 40 percent of all investors selected “political environment”, which makes sense considering the uncertain state of government function in the U.S. Congress these days. However, that percentage is well below the 54 percent who made that selection when the question was last asked three months ago or the 83 percent who selected “political environment” back in November of 2016, just after the presidential election.