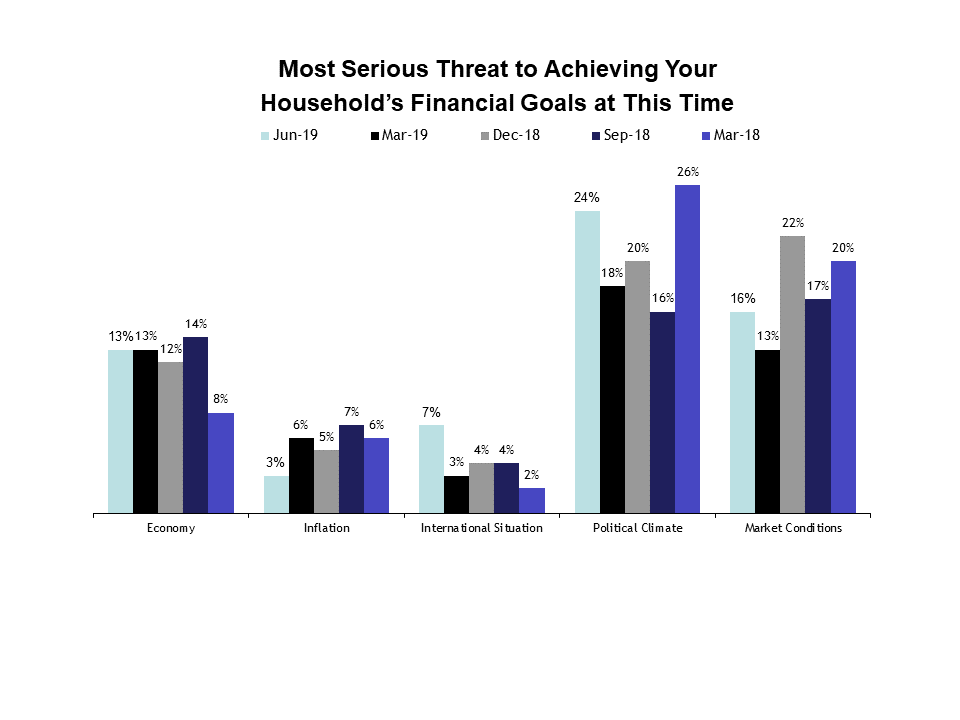 Politics has been a part of American culture since the first day and political discourse has held sway over the direction of the country since that time.

But the impact of politics on America has never been as strong as it is today.

For most of the current decade, politics in America have been different, dirtier, more powerful and effective.

And wealthy investors know just how important politics have been to their success and failure.

In Spectrem’s monthly confidence index survey, investors with at least $500,000 in investable assets are asked one key question about current events, and the questions rotate quarterly. For the June survey, investors were asked “What is the most serious threat to achieving your household’s financial goals at this time?”

In the June survey, 24 percent of investors answered “politics", and that was by far the most popular answer. Going back to March of 2017, “politics” has been the most popular respond eight of out the last 10 surveys. Only twice has “market conditions" outpolled politics as the top answer, and the last time that occurred was in December.

For the June 2019 survey, “market conditions" was selected by 16 percent of respondents, and 13 percent chose “the economy". Those were the only two responses to gather at least 10 percent of the votes.

Millionaire investors were more less likely to select “politics" as their answer, and more likely to consider “the economy". The same was true of working investors, while 31 percent of retired investors said “politics” was the most serious threat to their financial goals.

Spectrem research shows that investors are paying more attention to politics today than in the past, but that may just be a result of politics being more abrasive and confrontational than in the past. Also, with market conditions as strong as they are through the month of June, it is not surprising that something other than the stock market is considered to be the most serious threat to household financial success.